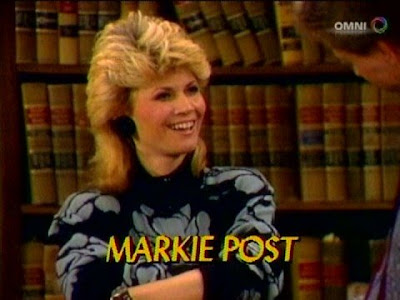 It's always been a dream of mine that I, a guy named Mark, would become so known as a brilliant blogger that I'd be unofficially nicknamed 'Markie Post.' If only I'd adopted that as my posting name rather than this whole 'Question Mark' nonsense. How is the Riddler a good influence?! A criminal so inept he actually leaves clues behind so he can be caught? Come on!

Anyway, the end of the year is the time to reflect on bad choices such as these. In case you made the bad choice of not checking this blog every hour on the hour for new updates, here's a look back at some personal favourites that you may have overlooked because you're a big smelly jerk. HOW DARE YOU [/Geoff Peterson]

December 17: A big vent of happiness about how great the past season of "It's Always Sunny In Philadelphia" was. Fun thing I forgot to mention: the performance of Alanna Ubach as Frank's whore (literally) fiancee. My mind was blown since Alanna Ubach gained childhood immortality playing the original assistant on Beakman's World. Good lord! Someone needs to write an elaborate fan-fiction about Charlie trying to set a trap to catch Lester the lab rat.

December 15: My review of "My Week With Marilyn." For some reason, most of my recent reviews have covered films that I didn't love or even necessarily really like, but simply found interesting. Honestly, that's probably the most fertile ground for analysis --- a concept that's *almost* there but was misconstrued in some way. Basically, I just like being a Monday morning quarterback. The more I think about it, it seems to be Michelle Williams' Oscar to lose at this point.

November 29: Case in point, this review of "Anonymous," which is really more a review of Roland Emmerich's dumb-ass theories about Shakespeare. A fantastic by-product of this authorship controversy is the fact that my brother believes it whole-heartedly. Actual quote from my brother recently: "Biggie was a better writer than Shakespeare. At least Biggie was real."

November 20: A big, long, bet-hedging screed about why the Packers weren't going to finish with a perfect record. Sure enough, they did indeed lose a game, which is probably better for their Super Bowl chances in the long run since now they can rest Aaron Rodgers and the other regulars this week. Hilariously and obviously, the game Green Bay finally lost was against Kansas City, the opponent I considered "the only gimme" remaining on their schedule.

November 4: I write 550 words about a ruined pair of pants. There's no such thing as a small topic, only a small author....or an author with way too much time on his hands. (Author/blogger, whatever.)

October 20: Some of the great audience reactions I've experienced at the movies. I look forward to adding another one to the list next week when the entire crowd joins together as one to chant "WAR HORSE, WAR HORSE, WAR HORSE!" #itcouldhappen

October 5: I update my rankings of the best comic-book movies ever made. In hindsight, doing this just months before 'Dark Knight Rises' gets released may have been a mistake.

September 27: I judge my immortal soul by seeing how many of the Ten Commandments I've broken in my lifetime. This one wins the prize for most popular post of the year among my friends, going by the unscientific method of Facebook likes and "Hey, I thought that post of yours was really funny!" mentions. It's probably disturbing that so many of my friends found the idea of my eternal damnation to be so amusing.

September 12: Pearl Jam and a very special guest just absolutely rock the fuck out at a Toronto concert and I'm there to see it. I dunno why I'm being so coy about the special guest...it was Neil Young. It's right there in the post's title, no need to hide it now.

September 8: My preseason NFL picks. Top four worst predictions, in no particular order: San Diego winning the AFC, the Saints finishing THIRD in the NFC South and missing the playoffs, Phil "Fantasy Team Killer" Rivers as the offensive player of the year, and the Rams winning the NFC West. On the bright side, at least I realized the Eagles would be a disappointment.

September 4: Analyzing my dream about an intergalactic flamingo attack. Androids dream of electric sheep, but I dream of alien flamingoes.

August 28: My day with the Stanley Cup. I can admit it now, this post was just slightly fictionalized.

August 21: This one isn't really *my* writing, but rather just a collection of terrific Grantland pieces from the site's first few months of existence. What the hell, I'll include it here, the stories are still great.

August 18: Pour one out for my old Macbook, which suffered an unfortunate and untimely demise this past summer. This is apparently a common affliction among Macs, since some friends of mine have also had their laptops suddenly die without warning. AND, Steve Jobs died before his time. What do they have over there at Apple, a bunch of hourglasses full of Skittles?

August 8: A look at how everyone turned on Tiger Woods, which basically could've been subtitled "Haters Gonna Hate, Even Though The Hate-ee Is Admittedly A Dickhead." It's also amusing, in hindsight, to note that nobody is exactly sticking to Stevie Williams as a cult hero, eh?

August 6: A bunch of random nonsense. Everything about that Antonio Banderas hat still fascinates me.

July 26: A collection of movie reviews. The fact that 'Tree Of Life' is getting legitimate Oscar buzz is baffling and infuriating. There's surely no way this thing could actually win Best Picture, could it? I never thought I'd see a BP winner worse than 'A Beautiful Mind,' but yet...

July 25: A breakdown of the most recent UK Apprentice season, and a general endorsement of the entire UK Apprentice series. My buddy Kyle tells me that there's such thing as "UK Junior Apprentice," that features a teenage cast. The thought of Lord Sugar berating some 15-year-old Cockney punk straight out of 'Attack The Block' is just amazing to me.

July 14: The annual tradition known as the Alterna-Emmys. As much as I enjoy writing these posts, I'd enjoy it a lot more if the Emmys actually got it right just once and rewarded deserving shows.

July 12: My fifth U2 concert, and so far they're 5-for-5. The post-concert highlight was my friend Ravi (who was also at the show) calling me up afterwards and having a 30-minute conversation about both the concert and U2's current musical standing in general. It was deep stuff, man.

June 30: The stretch of Dufferin between King Street and the CNE gets my vote as the worst street in Toronto. I think the best street in town might be that stretch of Eastern Road by the bakery whenever they're cooking fresh bread. Having a nose is AWESOME.

June 20: The final instalment of my 30-day Movie Challenge. (The first four parts are linked in this post.) I've got to be honest, it was more fun posting this was Facebook since I got to seek out all those cool pictures of the films. "Hey Mark, couldn't you have just posted those same pictures to the blog?" Uh, well, technically yes, but...shut up, Voice of Reason!

June 15: The infamous list of baby names. If I had a child, what would I name it? Or, if I had 44 children (22 boys, 22 girls, nice and even), what would I name each of them? It occurs to me that this list is a great potential pickup opportunity. You know, a woman is reading it, realizes she'd also love to have a daughter named Svetlana, and then falls madly in love with me. I should re-post this list once a month just to take advantage of his possibility since (if you can possibly believe it) blogging doesn't often get me laid.

May 23: I fix a toilet and am WAY too proud of myself about it. It's still astounding my apartment wasn't washed away in a Noah-esque flood.

May 16: My ranking of the best Survivor players of all time, sticking to just the show winners. This has been updated, by the way, to include the winner of the just-concluded Survivor: South Pacific season and it'll probably be updated for the rest of time to reflect future winners. So essentially, I'm condemning myself to even more future hours writing about this increasingly silly program.

May 15: This is easily the most anyone has ever written about journeyman actor Eric Lutes.

May 12: I ask the question, 'is Tiger Woods finished?' Given that he went the rest of the PGA Tour season without winning or really seriously contending in a tournament, the answer is still...maybe. And don't give me that bullcrap about Tiger winning the Chevron World Challenge or whatever that cheesy, 17-man field, silly season event is called. That's not a real victory. That's like winning a Golden Globe and claiming you're an Oscar winner.

May 6: Another random nonsense post, including my celebrity encounter with Mad Men's Rich Sommer.

April 23: Another dream analysis, this one vaguely concerning the Royal Wedding. No, this isn't just a dirty story about Kate Middleton.

March 28: A look inside Blogger's statistics to see just which of my blog posts are actually the most popular with readers. Y'know, instead of just relying on anecdotes and personal opinion like....uh, this post.

March 12: That damned Spider-Man Broadway musical that cost millions of dollars, dozens of actors' good health and most importantly, cost me from hearing a new U2 record this year. I never thought I'd directly quote Dr. Octopus like this, but damn that infernal wall-crawler!

February 25: The Markademy Awards! Not to spoil things for the next edition coming up in two months, but there have been very few films I've considered to be truly capital-G Great this year. Plus, if the Academy actually nominates a bunch of crap like 'The Tree Of Life,' I'll have PLENTY to rant about.

February 14: A solid instalment of the Hot! Live! Music! series. It includes my being totally ignorant about Adele, which is kind of funny since she went on to be the biggest musical star of 2011. Almost a year later, I've learned MUCH more about Adele, such as the fact that "Someone Like You" was co-written by the guy from Semisonic. Okay, that's the only Adele fact I know, and really, it's more about the guy from Semisonic. Maybe I should make it my 2012 resolution to learn more about that guy....like, for instance, his actual name.

February 5: I picked the Packers to win the Super Bowl and WAS TOTALLY CORRECT! YEAH BABY! Not to blow my own horn amidst this entire post detailing my greatest blogging hits, but I was really impressed with my "the Packers overcame every major story of the 2010 NFL season" theory.

January 30
April 11: I'll break with the chronological order for these ones. In January, I outlined the stupidity of the NHL's "Guardians" promotion, then in April, I used the Guardians as the basis for my Stanley Cup predictions. And I WAS TOTALLY CORRECT! YEAH BABY!...wait, the Lightning beat the Blackhawks in the Cup final, right?

January 13: An update on the ongoing slap bets I'm a) participating in and b) am overseeing as commissioner. Oddly enough, they both involve my buddy Kyle and (even more oddly) this particular update doesn't involve me being slapped in the face.
Posted by Question Mark at 3:09 PM