Another Evening With U2 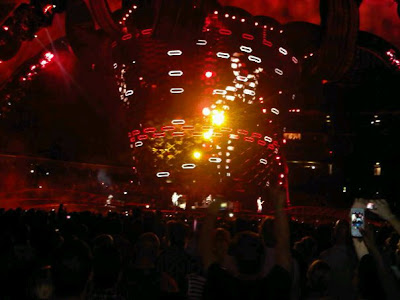 This was the fifth time I've seen U2 perform in concert and easily the most disorganized (from my end) of the five shows. Firstly, I wasn't even supposed to be there. [/Dante from Clerks] I missed out on getting tickets to U2's summer-of-2010 show at the Rogers Centre and figured what the hell, at least I'd seen the 360 Tour's first stop in Toronto in 2009. However, fate intervened and Bono underwent emergency back surgery that summer, postponing several shows and thus extending the tour into the summer of 2011. The rescheduled date was set for last evening, the same night that my old team-up buddy Kyle was just returning from a three-week trip to (ironically) Ireland with his lovely wife and daughter. Kyle and Carrie were too taxed from the flight to attend the show, so they offered their tickets to me and I pounced like a cat going after a rolled-up kleenex ball.

My initial choice to attend the show was my buddy Eric, who missed the 2009 concert due to a broken leg and was owed a bit of U2. However, Eric bowed out due to work commitments, leaving me on Monday afternoon trying to find a new concert date and scrambling like a cat chasing that kleenex ball down a staircase. What's with all the cat analogies, Mark? Geez.

Fortunately, finding someone willing to attend a concert put on by the best live band of all time isn't too difficult, so I found myself attending the show with noted music enthusiast Maggie W. "I admit, I didn't hear anything from their last album so I won't know any of the new songs," Maggie said. As it turned out, not a problem.

A lot has happened since U2 first launched the record-breaking 360 Tour back in 2009. Bono's back finally gave out from trying to carry Africa, the Edge's family made it through an unspecified health scare with one of his children, Adam Clayton had a kid, Larry Mullen continued to be Larry Mullen, the Spider-Man musical was a legendary money pit, and perhaps most pressingly, 'No Line On The Horizon' was U2's least successful album in years. As a result, pretty much all of the NLOTH songs had been pruned from the tour's setlist and the 360 concerts have become the closest thing U2 has ever done to a "greatest hits" sort of set. If anything, the album the tour seemed to be promoting most was the upcoming remastered version of Achtung Baby, out this winter to commemorate the 20th anniversary of that all-timer of a disc.

Is this a concern? Yep. U2's integration of new material into their concerts is the main reason, I'd argue, they are indeed the best live act of all time. A few semi-obscure tracks have been elevated by instant-classic live performances night after night on the road (i.e. Please, Zoo Station, One Tree Hill, and on this tour, I'll Go Crazy....) and of course, the biggest modern hits like Vertigo or Beautiful Day have become concert staples that any U2 show would seem incomplete without. If you take away that constant reinvigoration, U2 threatens to become the Rolling Stones --- a constant 'greatest hits set' band that has only one token song from its token new album. I doubt if any NLOTH songs will make it into future U2 tour setlists, as the band is already distancing itself from that disc as they did with Pop, and no Pop songs ever show up aside from the occasional attempt to bring back "Discotheque."

However, as a fan, I can't help but be pretty pumped up for a concert that features virtually nothing but U2's biggest classics. The band is still being creative by dusting off rarities like the Zooropa title track or Scarlet, but since this damn tour has already been held up twice and has stretched into its third year, it's clear that U2 just wants to wrap this up by playing some of its personal favourite live tracks. So basically what Monday's concert brought us was a U2 all-star game and, as usual, the result was awesome. The other bright side to the setlist shift was that I got to hear a number of songs I didn't hear the last time around at the Rogers Centre.

The roof was again open, since thankfully the forecasted thunderstorms stayed away. I feel the effect of the Claw stage would be lessened under a roof and plus, the building would've been stuffy as hell with 55,000 people packed in there on a hot and humid day like Monday. Our seats were in the upper deck so we got a bit of a breeze, but it was still probably pretty muggy for the fans down on the floor.

Re: ticket prices. There were a lot of inaccurate passages in the "U2 is on the decline" piece written by Ben Rayner in the Toronto Star over the weekend, but let's look at the one where he repeats the oft-cited claim that tickets to the 360 Tour cost $265 a pop. $265 is merely the average price, driven up by the uber-expensive seats right underneath the Claw and in the sections behind the stage. So those 5000 tickets are very pricey, but everything else is more than reasonably priced. When 55,000 of your 60,000 fans are getting in at great prices, it's just wrong to try to insinuate that U2 is gouging their fans. My two 360 Tour tickets were down on the floor and up in the 500s and the total cost was just over $100, so I feel like I got a bargain, frankly.

Anyway, enough complaints over the weather and poorly-written opinion pieces. Onto the music itself. Here was the setlist.....

*Even Better Than The Real Thing.....perhaps the surest sign that this is a 'greatest hits' tour now is that U2 took the rare step of not even giving a NLOTH track the honour of opening the show. Every other U2 tour of the last 25 years has featured a song from the most recent record kicking things off, and oftentimes this is one of the highlights of the concert (Streets, Hawkmoon 269, Zoo Station, Mofo, Elevation and City Of Blinding Lights). Then again, I'm not sure if NLOTH contained a surefire kickass concert opener. 'Get On Your Boots' was in hindsight the best option but U2 seemed to prefer saving their would-be hit single for later in the set.

*Until The End Of The World

*Get On Your Boots.....if any NLOTH song sticks around, btw, it'll probably be this one. It's the most-known track of the bunch, it's an easy rocker for the crowd to get into and it's really, really good live.
*I Still Haven't Found What I'm Looking For

*Beautiful Day....in a cool addition from the first 360 tour leg, BD now features a cameo appearance from an astronaut on the International Space Station reciting the "see the world in green and blue..." lyrical bridge. I made a tongue-in-cheek bet with Maggie where I offered to refund her ticket if U2 didn't play this song. Obviously this was a no-lose bet but it was dumb on my part since Maggie didn't have to give up anything when U2, in fact, did play it. Surely some sort of counter-wager should've been involved. I should've made Maggie scream something like 'TAKE OFF YOUR SHIRT, LARRY!'

*Miss Sarajevo......Bono's opera voice didn't reach the heights that it did during the Vertigo Tour. If Miss Sarajevo can't get the full Pavarotti, Bono should probably retire it from live shows.

*I'll Go Crazy If I Don't Go Crazy Tonight....this included a tantalizing snippet from Discotheque, which would cause me to lose my shit if I ever heard it played live in full

*Scarlet.....easily the most obscure song of the bunch, it's a three-minute track from the 'October' album that is basically an instrumental, with Bono singing just the word 'Rejoice' over it. (Confusing, U2 has a separate song on that same record actually titled 'Rejoice.') Perhaps the most notable version of Scarlet from the 360 Tour came in Auckland when opening act Jay-Z showed up to lay down a rap over the song. Yes, by the way, that's right, Jay-Z opened for U2. Oceania isn't a hip-hop hotbed. See, that's why U2 are still, for my money, the biggest band in the world. They're headliners everywhere, whereas a lot of North America's current biggest music stars are only huge in North America and maybe Europe.

*Where The Streets Have No Name

*With Or Without You

*Moment Of Surrender.....my pal Ravi feels this song is a letdown as a concert-closer since it's one of the little-known NLOTH tracks. My counter argument is that it's a great song but pretty much the only place you can play it in the set is right at the end. Sticking a seven-minute new song that's basically an extended jam into the middle of a setlist will start a stampede for the concession stands and bathrooms, no matter how good it is.

The bottom line is that U2 put on yet another fantastic concert and I can't wait to see them for the sixth time on their next tour. Am I ever glad that Kyle and Carrie got hosed out of the experience thanks to Bono's wonky back. Uh, um, er, I mean, thanks for the tickets, guys! I'm grateful!
Posted by Question Mark at 2:23 PM

Awesome. Glad you had fun...and super-impressed they did "HMTMKMKM" (one of my two or three favorite U2 tracks).