I should probably get at least one post on the books for the year, right?

Posted by Question Mark at 6:28 AM No comments:

NFC Championship Game: Buccaneers over Packers.  Oh, if you're wondering my take on the whole Aaron Rodgers situation, I think he is 99 percent dead-on with every criticism he has of the Packers organization, and it is amazing to me that this team has gone out of its way to alienate its franchise player.  I'd love to see Rodgers depart after one more Super Bowl win, but I think their window was realistically last year, before the Bucs became fully super-powered.  Gee, I wonder if having a first-round pick who did LITERALLY ANYTHING might have helped in last year's title game.  Oh well!

By the way, the Packers aren't actually making the NFC title game.  Doing literally nothing to improve their defense will (surprise) not make their defense any better, but this will somehow be twisted as Rodgers' fault.  The Bucs will beat the Seahawks.

Super Bowl 56: Chiefs over Buccaneers in the rematch

Posted by Question Mark at 4:29 PM No comments:

All The Playoff Picks Possible

I realize that the playoffs have technically already started, but whatever.  It's not like I couldn't edit this post after the fact and pretend I got everything completely accurate.

* Penguins over Maple Leafs in seven
* Avalanche over Lightning in six

* Avalanche over Penguins in seven

* Play-in games: Warriors over Grizzlies, Wizards over Pacers.  Incidentally, these play-in games are a dumb idea.  I know the Lakers/Warriors game was a banger, but let's be real, the ninth and 10th teams in a conference have no business playing for anything.

* Jazz over Warriors in six
* Clippers over Mavericks in six
* Lakers over Suns in seven (and seven is also the amount of close calls that will go Phoenix's way in the series, with the other 85 close calls all going the Lakers' way)
* Nuggets over Trail Blazers in six
* 76ers over Wizards in five
* Hawks over Knicks in seven
* Nets over Celtics in six
* Bucks over Heat in seven

* Lakers over Clippers in five
* Bucks over 76ers in six

* Lakers over Bucks in six.

This is also the first NBA playoffs in years when I have absolutely no idea who's going to win.  I'm going chalk in taking Los Angeles but if LeBron or Davis gets hurt again, any of a half-dozen teams could emerge as champions.

Posted by Question Mark at 4:31 AM No comments:

Leaping out of posting hiatus since this bowling alley drone video is that darn cool.
Posted by Question Mark at 4:11 AM No comments:

Posted by Question Mark at 5:47 PM No comments:

Since the season has technically started, time to get these down on paper.  Starred teams are the wild cards, and don't forget, it's seven playoff teams per conference now.

NFC title game: Cardinals over Packers.  No, I haven't lost my mind, I'm just not crazy about just about everything in that conference.

Posted by Question Mark at 3:49 AM No comments:

Geez, I was looking at my blog traffic numbers over the last few months and they've dropped like a rock!  Whatever could be the matter?!?!

Posted by Question Mark at 1:25 AM No comments:

Did you know that our Supreme Court has a mascot?  And that the mascot is a cuddly cartoon owl named Amicus?
Oh Canada. 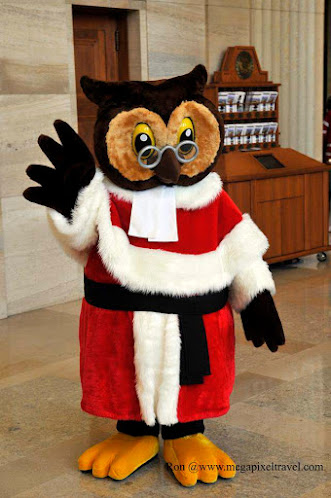 Posted by Question Mark at 9:47 AM No comments:

My friend Dave was recently telling me about his purchase of some kitchenware, and how he was looking for a braiser but the store didn't have any.

Me: Did the employee said "Braiser....has left the building"?

Posted by Question Mark at 6:07 AM No comments:

Posted by Question Mark at 8:40 AM No comments: