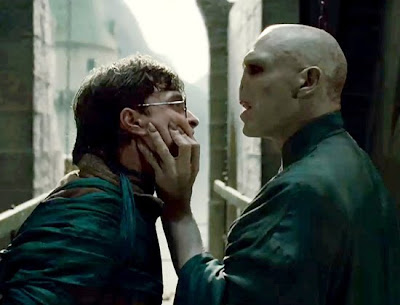 With all of the hype and huge box office following Harry Potter and The Deathly Hallows, Part II, let's not fool ourselves into thinking these movies were really good. We're not seeing the conclusion of some epic era in film history --- rather, just the end of the most obligatory film series ever made. You knew when the books became such a phenomenon that film adaptations were inevitable and sure enough, Warner Brothers was so careful to not let this money train get off the rails that they produced eight of the safest, most more-or-less closely adapted movies they possibly could. Of the eight pictures, this last one and the third one (Prisoner of Azkaban, directed by Alfonso Cuaron) were at a B+ level, with the rest middling around the lower B's or C+/C range. So nothing really bad, but nothing really good, either. The movies just trundled along, collecting up billions of dollars and also providing retirement packages for literally dozens of British actors.

As I've written before, I think the turning point for the Potter movies was when the producers abandoned the idea of having a different director for every film. After the first two Chris Columbus-directed films threatened to sink the project, Cuaron was hired to pump some life into the franchise. Then, it was Mike Newell who did the fourth movie, then David Yates did the fifth....and that was it, Yates suddenly became the man for the rest of the series. It's probably telling that after watching four of his movies, I have no idea if Yates is a good director or not. He did a workmanlike job of adapting the novels to the screen, but I dunno, I expect more from an allegedly-epic film series than "workmanlike." From start to finish, the whole Potter series just lacked a bit of extra spark that would make them seem really worthwhile. It was never, "Oh man, the new Harry Potter movie is out, that's an opening night view for sure," but rather, "Well, here's another Harry Potter movie. I guess we should go check it out."

Now, hard as it is for me to believe, there's probably a sizable audience that's invested in these characters through just the films and who've never read a word of J.K. Rowling's books. For them, this probably has been a great, eight-movie journey, though for the life of me, if you haven't read the books, aren't these movies confusing as hell? I guess I understood the basic gist of Lord Of The Rings without ever reading Tolkien, but still, the films contain so many characters and slough over so many important (in the novels) situations that I can't see how a casual viewer can keep track. But, my issues with the franchise as a whole aside, HPATDH2 brings things to a satisfactory end and is a decent movie standing on its own merit.

Oh, and by the way, let's not also ignore the fact that these kids can't fucking act. You can stick all the Rickmans, Smiths, Oldmans and every other awesome British actor you can find to chew the scenery and carry scenes, but let's be honest, Radcliffe/Watson/Grint ended up bringing very little to the table. I could see Grint maybe carrying on as 'average British guy' in a few future movies, but let's hope Radcliffe and Watson saved their money. Is it wrong of me to outright dismiss the prospects of actors who are still just in their early 20's? Well, how are they supposed to improve? MAGIC?!

I had the same basic problem with both Horrible Bosses and Bad Teacher so I've decided to combine their reviews into one space. Basically, the bosses were too horrible and the teacher was too bad. Ok, I realize this sounds like the dumbest criticism ever ("What was up with them finding redemption at Shawshank?? NO STARS!") but hear me out.

In Horrible Bosses, the premise is that these three guys are all employed by such terrible people that the guys have no choice but to murder them. Comedy! This would've been a much better premise if the whole film had been a black comedy, or if they'd taken the time to establish that the three guys were all kinda terrible people themselves for resorting to murder. (Jason Sudeikis is ostensibly killing Colin Farrell to keep him from dumping a bunch of toxic waste into a nearby wetland or something, but I dunno, it mostly came off like Sudeikis just trying to justify it to himself.) Since Charlie Day is right there, if you imagined the three guys from It's Always Sunny... committing themselves to a triple murder plot, that's suddenly a much funniest movie right there. However, since "Horrible Bosses" is committed to the idea of the three guys being the heroes, then they have to go overboard to make the bosses really awful.

Spacey and Farrell are both sort of cartoonishly rotten, but Jennifer Aniston's maneater dentist was probably the toughest sell. Charlie Day's problem is that Aniston keeps sexually harassing him, which as is even pointed out by Sudeikis and Jason Bateman, doesn't sound that bad. So the ante is upped when Aniston threatens to ruin Day's engagement by telling his fiancee that Aniston and Day are having an affair and, oh yeah, Aniston also has pictures of she and Day having sex when Day is knocked out from anesthesia. The film kinda just casually tosses in that, y'know, Aniston RAPED HIM but this is more or less glossed over with a scene of Day yelling in a high-pitched voice. If you're still wondering why I'm focusing on this, imagine the genders were switched. If it's Charlie Day raping Jennifer Aniston, methinks the plot wouldn't cavalierly move on from that point.

"Bad Teacher," similarly, can't get out from under the fact that Cameron Diaz's character is a lousy human being, a lousy teacher and (most importantly) isn't funny when being played by Cameron Diaz. I can buy a total degenerate lead character and certainly root for them if they're played by an actor with comic charisma. Hell, just going by the supporting actors here alone, I'd definitely watch 'Bad Teacher' starring Jason Segel as the Bad Teacher. Or Lucy Punch. Or Thomas Lennon. Cameron Diaz, nope, since Diaz isn't naturally funny and is only barely a passable actress. This isn't Billy Bob Thornton embracing his inner sleazeball in 'Bad Santa,' this is Diaz trying and failing to be lovable white trash.

On the opposite side of the spectrum, Captain America is basically sold by the fact that Steve Rogers is a genuinely good guy. He's five-foot nothing, a hundred and nothing (tm Notre Dame football), but he wants to enlist in World War II more than anything because he just straight-up feels it's the right thing to do. He's short and tough without a Napoleon complex, and while his parents both served in WWI, Steve isn't enlisting just to follow in their footsteps. He's just a class act all the way around. While we've been indoctrinated to believe that all superheroes (especially Marvel characters) need to be driven by angst and conflict, Captain America has always been presented as the most clean-cut and noble of heroes and you know what? It totally works. Now, we'll inevitably see a lot of the fish-outta-water pathos in the Avengers movie and the inevitable Captain America sequel(s) as Cap adjusts to life in the 2010's, but for now, let's just enjoy a good old-fashioned tale of Captain America kicking some Nazi ass.

Also a nice touch --- unlike 'Iron Man 2' or 'Thor,' 'Captain America' was mostly a story unto itself, not an extended trailer for next summer's Avengers movie. (No pressure on that movie, by the way. Marvel has just been teasing it for five years, putting all its eggs in one basket and possibly threatening about six different film franchises at the same time if 'Avengers' fails. No biggie.) There are lots of little teases and easter eggs about the future, the largest of which is obviously Tony Stark's father as Cap's technical support aide in the 40's, but this is first and foremost a Captain America movie. You have the obligatory Sam Jackson cameo and, of course, the subtitle of "The First Avenger," but overall, if you're a Cap fan waiting to finally see your comic book hero come to life on the big screen*, you'll be very satisfied.

** = Side note: Conan O'Brien needs to retire the "Looks Good" bit immediately. They are trying hard to turn it into the next Chuck Norris level-style gag, but it is just not working. This is in no small part because Conan's delivery of "looks good" sounds nothing like the ET guy's actual delivery.

A theatre in Connecticut actually posted this notice in its lobby.... 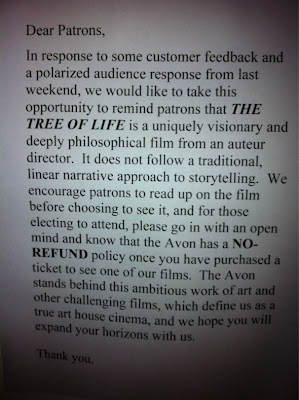 Hilarious. Imagine going to see The Tree Of Life without really having any idea what it was about. Would seeing this notice make you more curious about the movie to see what the fuss is all about, or would you immediately head to see, say, Bad Teacher after being so turned off by the snotty tone?

Unlike the poor unsuspecting Avon patrons, I knew Terrence Malick isn't into "a traditional, linear narrative approach to storytelling" and thus I was prepared. And sure enough, there's about a 90-minute chunk of TOF that indeed uses a fractured and moderately interesting story structure to tell us about a Texan family growing up in the 1950's.

Unfortunately, there's also dinosaurs. Yep. You see, Malick decides to use this family as a metaphor for basically, oh, all of human existence. And to get to the 90 minutes about the O'Brien family, you first have to wade through about 30 minutes of metaphysical horseshit that will bore you, make you suddenly fascinated with your watch and generally leave you wishing that Malick would've just become an exhibitionist in a particularly dirty sex club if he was this enthralled with the idea of jerking off in front of an audience. I can't blame Brad Pitt for appearing in the movie since I secretly believe he spends 70 percent of his time stoned, so this script probably blew his permafrosted mind. As for Sean Penn, well, who else for a role in an epic of self-importance? Tree Of Life is beautifully-shot, but holy lord, is there ever a lack of substance.

Malick is famous for taking years to craft and develop his films --- he's only directed six pictures in 32 years. He's basically a poor man's Stanley Kubrick, with the exception that Kubrick usually made those long waits pay off with some of the greatest films ever made. While Kubrick was no stranger for self-indulgence himself, he also never tried to elevate his childhood (Malick, btw, grew up in Texas in the 1950's) to universal proportions and asked viewers to watch it. The next time Malick is eight years' deep into a project, he should take another year to ask himself if this is really worth it.
Posted by Question Mark at 9:32 PM