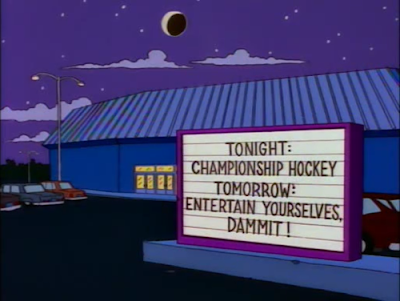 Check out my predictions from the start of the season. Not too shabby! Uh, aside from picking New Jersey to be second in the East. And picking the Leafs to make the playoffs. And picking the Avalanche and Flames for the West bracket. But the rest was all super! Surely that means you can bet your child's college education on these predictions! And if they end up being wrong, well, don't worry. Between you and me, I always thought your kid was a little slow. You can still get him into Brock.

My preseason pick of Pittsburgh over Vancouver is still alive and well, but what's the fun in that? Besides, I made that choice before Sidney Crosby and Evgeni Malkin had their respective brain and knee explode. So, I'm going to predict this year's Stanley Cup winner in the most well-reasoned, logical, hockey skill-based way I know....by predicting the winners based on NHL Guardian fights.


* Blackhawks over Canucks
The Blackhawk is basically Iron Man and he can control wind. The Canuck is kinda, sorta like Aquaman, and he can control rain and has a shape-shifting cloak. Yeah, I've got to take Iron Man in this one. The Canuck might be able to summon whales to help him, but I'm guessing a whale might not stand up to, like, a guided missile. Plus, the Blackhawk can just blow the rain right back at him. Now, I know you're stunned to think of the Canucks coming up short in the playoffs, but let's be honest, their Guardian deserves it for ripping his name off from another superhero. The REAL Captain Canuck shows up to give the Blackhawk an assist, leaving the Canuck crying in his latte.

* Red Wings over Coyotes
Wolver...er, The Coyote can summon cactus quills and actual coyotes from within his coat. So let's see, the quills will just bounce off The Red Wing's armour while the coyotes will be literal road kill against a guy who's basically a human motorcycle. Possible x-factor: the Coyote can "conjure up the spirits of the earth and his ancestors in order to get advice as well as to get help when needed." This could be a good thing since the Red Wing is "not much for reacting and improvising is not his strength" (why would you publicize that?), but would the Coyote's mystical powers be of much help? His ancestors wouldn't offer much beyond OH SHIT, RUN FROM THE GIANT CAR/PLANE GUY! and the spirits of the earth have been trying for years to eradicate Detroit, with no success.

* Predators over Ducks
Kind of a weak matchup here, since neither The Predator (or, 'Pred' to his buddies) or The Duck are exactly the roughest of the Guardian crew. Presuming this fight takes place on neutral ground (i.e. not near water), you've got a guy in a duck-themed bio suit against a giant titanium cat-man hybrid with claws that can cut through steel. So yeah, goodbye steel bio suit. Also, don't sleep on the Predator's power of being able to spit radioactive plasma. Nobody wants to wake up to a wad of plasma in their eye.

* Kings over Sharks
Tough fight. The King is armed with a force field-generating shield, an earthquake-inducing sword, and has almost certainly fucked Drew Barrymore. The Shark can mentally control computer technology, has superhuman senses, has a gang of sharks to help him fight, and HAS THE HEAD OF A SHARK HIMSELF. You can see this battle played out daily at your local high school if a drama kid ever takes on a computer studies kid. Who wins? The King, naturally. "Mark, is this related to your taking five years of high school drama class?" No! It's also because of the fact that I've spent my life trying and failing to get this "Mark The Shark" nickname off the ground. Screw you, Sharks. Screw you, Sharks. You're no match for the King and his earthquakes and Hollywood buddies and Alexei Ponikarovsky!

* Lightning over Penguins
Electrical powers and being able to move at the speed of light easily trumps "a set of Penguin-like wings attached to his arms" Yeahhh, this one is a blowout. Seriously, the Penguin will literally get blown out of his own skeleton thanks to 100,000 volts of electricity.

* Capitals over Rangers
This one is also over pretty quickly. The Capital possesses the power of shape-shifting, so he simply morphs himself to resemble Joe Namath. The Ranger is starstruck, leaving an opening for the Capital to get close and unleash a sonic scream right in the Ranger's (probably cauliflowered) ear. Alternate strategy: the Capital uses his power of languages to bust out some, I dunno, Czech. Since the Ranger "loves meeting people from other parts of the world," he goes to say hello and inquire about hotel rooms in Prague, then it's sonic scream time, baby.

* Bruins over Canadiens
Ah, this one is interesting. Given The Canadien's "power absorption", you'd think he'd be the clear favourite in any matchup, right? Well, this is where The Bruin's weak-ass powerset is actually a boon. The Canadien copies Bruin's power, but then is overwhelmed by the sheer wall of stench that hits his nostrils due to the Bruin's super-sense of smell. Remember, the Canadien is French -- he'd be taken aback by a slightly-off wine, so he's certainly not up to handling the odour of everything in the vicinity, times 100. The Bruin, meanwhile, gets himself a boost by the Canadien's "power augmentation" ability that allows him to enhance his fellow Guardians' abilities. This seems like kind of a crappy, self-defeating power for the Canadien, sort of like how insisting that your head coach be French-Canadian prevents you from hiring the best person for the job. But hey, this is just a battle of comic book heroes. Nobody would put such a dumb, self-imposed impediment on themselves in real life!

* Flyers over Sabres
So rather than being some kind of swashbuckling swordsman, The Sabre is a guy made of water. I've read enough of Spider-Man's adventures against Hydro-Man back in the day to realize that the best way to beat a guy made of water is with electricity. So, The Flyer can use mind control to keep Sabre in place for a few minutes, perhaps by asking him to recount the unfairness of Brett Hull's crease goal in the 1999 Cup Finals. While Sabre is belly-aching, the Flyer simply uses his telekinetic powers to detach the nearest electrical wire and bring it on over to give the Sabre a nasty zap. Then the Flyer shares a hearty laugh with his "pet titanium eagle," which I presume is named Bernie.


* Kings over Predators
Titanium claws and radioactive spittle? No problem against a guy who has a forcefield. The King starts up an earthquake that leaves the Predator unconscious, or perhaps just dazedly singing a Vince Gill song. The King laughs and then heads out clubbing with Scarlett Johansson. By this point, I'm basically just pretending the King is Stephen Dorff's character from "Somewhere."

* Blackhawks over Red Wings
Ooh, another upset. Both guys have basically the same powerset, except the Blackhawk has that added bonus of controlling the wind. When in doubt, always give the edge to a guy with weather powers. A badly-timed breeze can mess up someone's day. Like one time in grade school when I was looking over my big six-page presentation about fossils when a sudden gust blew my project out of my hands and I had to scamper around the schoolyard, grabbing at stray pages while the other kids pointed and laughed. If you'll excuse me, I need to phone my therapist, Dr.....WIND! *plot twist*

* Lightning over Capitals
Having never seen the movie 'Bird On A Wire,' I presume it doesn't actually involve a scene of a bird getting fried to death by sitting on an exposed electrical wire. We'll make up for that oversight by having the Lightning just fry up ol' Beaky, creating a delightful chicken smell over the greater Washington area. Speaking able to speak, say, Slovakian doesn't help much when you're facing a living electric spark.

* Flyers over Bruins
Thanks to the Bruin's sense of smell, he'll be able to realize just how screwed he actually is. Having a "petrifying roar" doesn't help much against a guy who can just fly out of range of said roar. Hell, Bernie The Titanium Eagle stands a decent chance against the Bruin on his own. (And shouldn't the Capital be pissed that it's the Flyer, not him, who gets an eagle sidekick?) The Bruin takes a sound beating, and then retires to become an air cargo pilot in a remake of TaleSpin.


* Blackhawks over Kings
Once again, the wind power. Blackhawk stays in the air to avoid the King's latest earthquake, but thanks to the shield/forcefield, Blackhawk can't lay a hand on his cocky adversary. Finally, Blackhawk reaches into his bag of tricks and fires up a gust of wind that either blows the toupee off the King's head or merely presses his skin so firmly against his face that it undoes his Botox and reveals that the youthful King is actually as wrinkled as a modern-day Josh Brolin. Scandalized, the King shrieks and runs away to the nearest salon.

* Lightning over Flyers
This is an interesting battle of mental powers against physical powers, since the Flyer's power of suggestion could be a big weapon against his much more powerful foe. However, if I remember my comics correctly, having electrical powers also gives you some degree of resistance against mental coercion, since the brain runs on electrical impulses (or some such comic-book science gobbledlygook). So while the Flyer tries to convince the Lightning to take a break, relax and agree that Bobby Clarke was a good general manager, the Lightning ain't gonna fall for it.


* Lightning over Blackhawks
And finally, here we are. The Stanley Cup final. I've gone this far in championing the incredibly-powerful Lightning, so why stop here. A little bit of a breeze won't stop the Lightning from sending a few thousands volts through the Blackhawk and ending his surprisingly strong defense of the championship. The Lightning wins the Cup and gets bragging rights in the Guardians' fortress until next spring. Bonus prediction! If Tampa Bay actually does manage to win the Stanley Cup, then I will literally kick myself for not putting a few bucks down on this ridiculous prognostication method.
Posted by Question Mark at 1:41 PM