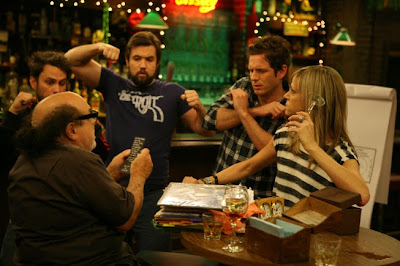 It's rare for a show to last for seven seasons on the air. It's even rarer than a show is still watchable in its seventh season. It's NIGH-UNHEARD OF that a show's seventh season is actually its best one, and yet, I think this is what has happened with the latest series of It's Always Sunny In Philadelphia. Thirteen episodes, twelve of them gems (we'll get to the non-gem in a moment) and really, no signs whatsoever that this show is anywhere near slowing down.

If you've never seen IASIP before, good lord, drop what you're doing and hit up Netflix. The show can and has been most easily described as "Seinfeld, except with sociopaths." I've always felt this description somewhat undercuts just what terrible people the Gang are. The Seinfeld crew were already more or less sociopaths --- the IASIP Gang take it to a far more depraved and terrifying level. On Seinfeld, you were always somewhat rooting for those characters to win; on ISAIP, you're whole-heartedly rooting for the characters to lose since my god, imagine a world in which these people were successful?

Things kicked into high gear even before the season started when word broke that Rob McElhenney had put on 50 pounds solely because he thought it would be funny if Mac was suddenly a big fat guy. Just amazing. Mac's outfits for the year were nothing but comically tight t-shirts and Hawaiian shirts, topped off by the thick beard that made Mac look like a foul-mouthed, rage-filled young Orson Welles. Actually, keeping with the Welles theme, imagine this except stretched over 6.5 hours.

Yet, despite the fact that McElhenney risked his health for the sake of the show, I'm going to have to split the season's MVP award between Kaitlin Olson and Glenn Howerton. The Reynolds siblings were in nothing less than rare form all year round. There is no good reason why Olson doesn't have at least a couple of Best Supporting Actress Emmys already, and Howerton just gets funnier and funnier as Dennis' pure sociopathic nature becomes more and more apparent over the run of the show. Mac takes third place, while Charlie Day (while still as funny as ever) comes in last behind Danny DeVito. Why Frank in fourth?

* "RUM HAM!"
* A heavily made-up, sweaty, panicked Frank trying to assure a gymnasium full of people that he isn't a pedophile
* "I'm going to whip this little bitch in the face!"
* Relating the entire history of the Gang to a group of confused Asian tourists while in the midst of hijacking their tour boat

These are among Frank's all-time greatest moments, and the fact that they're all in the same season is enough to let him escape the Character Ranking basement. Sorry, Charlie. And, the fact that Frank had such an amazing year and only finished fourth is a testament to just how hilarious the entire cast continues to be in these roles.

So, the weak link. The "Frank's Brother" episode was unique amongst IASIP episodes in that for 80% of it, it wasn't trying to be funny. It was a legitimately straight-forward tale of Frank's early life and it was odd to watch. It was 22 minutes of waiting for the other shoe to drop, yet as presented, it actually gave Frank (heretofore one of the most scheming, evil bastards on planet Earth) a softer side in his younger days. I wouldn't call it a bad episode, per se, but…man, it was just weird. I can't be entirely mad about any episode that features Lance Reddick, though, and one lacklustre episode doth not a season ruin. The White Album had 'Revolution 9,' after all.

The top three, in particular, rank amongst the best episodes from all seven seasons. The first part of "High School Reunion" has what I'd say is probably the single biggest laugh of the entire series for me, and since I wouldn't dream of spoiling it, I'll just say it was 'the nametag scene' and leave it at that. That was a legitimate tears-of-laughter moment that had seven years of buildup behind it.

Parks & Recreation is still pound-for-pound the best comedy on TV (and arguably the best show), while Community is easily the most inventive comedy on TV. In terms of pure laughs, though, both shows will be hard-pressed to top what IASIP did. And, it will be a tough nut to crack for P&R and Community -- great shows as they are -- to still be this good in their seventh year. Yeah, that's right, I'm presuming Community can somehow make it to a seventh season. Believe. #SEVENseasonsandamovie
Posted by Question Mark at 11:08 AM

I agree with kaitlin as season 7 mvp. chardee mac dennis and the gang gets trapped were the two best eps of the season. but you lost me with parks and community. the best shows on tv are 1.ncis 2.always sunny nuf said.