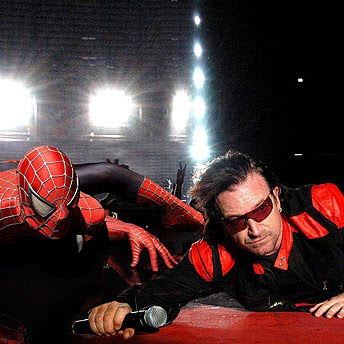 "U2 albums never get finished, they just get released." -- The Edge

This might surprise you to hear, but Bono is kinda prone to hyperbole. A few months ago, he claimed U2 had not just one, but several new albums in the works. To wit...

-- a record produced by none other than Danger Mouse, who U2 had been recording and working with since last year. U2 have famously stuck with some combination of Steve Lillywhite, Brian Eno and Daniel Lanois as producers for almost all of their albums, so the fact that the band is branching out to not just a new name, but one of the more innovative producers in rock music today is very, very interesting.

-- the "Songs Of Ascent" album that was conceived during their last major recording sessions. SOA was going to be a sister record to "No Line On The Horizon," akin to how "Zooropa" was the low-key follow-up to "Achtung Baby." Now, it should be noted, Bono often talks about how much material the band generates during their recording sessions and we end up seeing almost none of it, but the fact that an actual title, theme and songs (some of which popped up on the 360 Tour) were mentioned made this project seem much more concrete than others.

-- a dance and techno-flavoured record produced by the likes of Will.I.Am, RedOne and David Guetta. Uh, sure? This might have just been Bono talking out of his ass or simply talking about these guys doing some remixes of existing U2 songs, not a whole new recording. At least, I'm hoping this is the case since a U2/Black Eyed Peas team would make me put a gun to my head.

-- a U2 version of the songs Bono and Edge wrote for the Spider-Man: Turn Off The Dark musical.

So yeah, four discs. Sweet! Now, since Bono pretty much can't say anything related to U2's music that doesn't require a big grain of salt, nobody is seriously thinking all four of these discs will be in existence anytime soon. But there has been so much buzz about new material that SOMETHING has to be percolating. U2 is starting a North American tour in May, and since it's been over two years since their last album release, it makes sense that the band would want some new material to promote out on the road. A two-year gap between records would also be a welcome bit of productivity from a group that's definitely fallen into a pattern of taking longer and longer between proper releases. Since "Pop" in 1997, every U2 album is released in conjunction with a worldwide tour that takes a couple of years to complete, then the band needs at least a year to recharge, and then the recording process takes a good 18 months since U2 are notoriously slow/picky/uncertain/etc. about putting their next project together.

But now, U2 seemed to have a fresh burst of creativity. The fact that U2 was playing unreleased songs on tour (something they hadn't done in decades) was another sign that the band was going to loosen up a bit. Maybe they'd release an album online a la Radiohead, or put out two discs on the same day, or anything that seems par for the course for a modern band but would seem very fresh coming from an old-school outfit like U2.

So all great plans, very intriguing stuff....and it might be for naught thanks to this bloody Spider-Man musical. The latest on this fiasco is that director Julie Taymor (the one held largely responsible for the mess of a show that has cost millions to produce and still hasn't "officially" opened on Broadway yet) has been removed, so basically the whole thing will end up being overhauled. What this means for Bono and Edge's current songs is anyone's guess. The music obviously won't be thrown out altogether, but certainly rewrites may be necessary and possibly even some new material needed. In short, this thing will take up more of B&E's time, which is time that could be spent wrapping up this Danger Mouse album, or figuring out how to "U2-ize" the Spider-Man songs (i.e. talking Larry Mullen and Adam Clayton into bothering to record them) or deciding if 'Songs Of Ascent' is a strong enough concept to be its own disc or if they will just poach the few best songs from that project for something else.

At the end of the day, I care about new U2 music. I certainly don't give a crap about this Spider-Man musical. It was a bad idea from the get-go, and it got worse when a) it became apparent that Taymor had little to no idea about Spider-Man and b) that the show couldn't get through a performance without a technical screwup and/or injury to one of the performers. This thing has already become a legendary boondoggle. Bono and Edge have already been tainted just by association, though most of the (pan) reviews focus on the shitty production and story, not the music.

The good news is that Bono and Edge sort of have a drop-dead date for their Spidey work. U2 are on tour in South America from March 25 to April 13, and then they begin their major North American summer tour on May 11 in Mexico City. One would think at some point they'd throw their hands up and tell the Spider-Man producers, "Look, we have to get back to our day jobs. You have our music, just build a better damn story around it. Ciao!" The problem, however, is that if the Danger Mouse record isn't in the bank by May, then U2 will be on tour and have no time to finish it, and it would make little sense for them to release a new album AFTER they've finished their last tour for what should be several years.

As much as I would love it if U2 suddenly flipped a switch and did things like release records online or put out new material just for the sake of it (not accompanied by a major tour or publicity blitz), everything in the band's history tells me that once they go off the road this summer, that's it until at least 2013. I want this new U2 music as soon as possible. A U2/Danger Mouse collaboration is big news, so surely the band wouldn't just shelve it for years. Hell, even U2 working with the likes of RedOne* is big news given his current high profile in the music world. The last thing I want is for this Spider-Man musical to become the convenient excuse that allows the band to once again scrap a recording session due to the lack of a surefire big hit or the fact that they felt they just hadn't devoted enough attention to the process.

If U2 are given time to overthink, the result is an over-produced album (How To Dismantle An Atomic Bomb) or a thematically-unstable album (No Line On The Horizon). Be spontaneous, U2. Just put out the disc and see what happens. Hell, put out an EP if you only think you have six or seven top-rate songs. Just put out something before your next hiatus. Don't let Spider-Man defeat Danger Mouse.