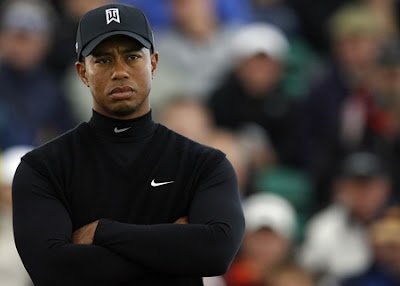 Stevie Williams is the toast of the town. To recap his story: Williams was unceremoniously fired from his long-time position as Tiger Woods' caddie a couple of weeks ago. Tiger said he fired Williams in person; Stevie said it took place over the phone. Still, it was stunning that Tiger was parting ways with the caddie who had carried his bag for almost all of his wins and major championships. Williams was open about how disappointed he was with the firing, claiming he'd "wasted two years of his life" defending Woods and how stunned he was that Tiger ended their relationship so abruptly.

Anyway, Stevie got (for the moment) the last laugh. Tiger made his big return to the PGA Tour last week after spending three months recovering from knee and Achilles injuries. He tied for 37th at the Bridgestone Invitational, a pretty middling performance considering he's won this tournament seven times in the past. As for Williams, he had a much better week....or, rather, his new boss did. Williams was hired by Adam Scott* and sure enough, Scott picked up the victory at the Bridgestone. Afterwards, Stevie said that this win meant more to him than any of the others in his career. Quite the dig at Tiger, no question, but also a dig at former bosses like Greg Norman and Ray Floyd, though I'm sure Williams only intended to insult his most recent employer.

* = As I've said many times, if Adam Scott would ever hit a long drive and then turn to the camera and say, "Are we having fun yet?", I would instantly become his biggest fan. I would shut down this blog and re-open it as an Adam Scott tribute site, complete with songs, poems and photoshopped images of Adam Scott inserted into famous moments in world history. "Hey John Hancock, save a bit of room for everyone else, since here's Adam Scott signing the Declaration of Independence!"

The odd outpouring of "yeah, way to stick it to him, Stevie!" running through the sports world leads me to a few conclusions. Firstly, Tiger Woods is apparently a huge asshole. Secondly, the greater golfing world, media and even the fans are hypocrites.

My first conclusion is not exactly an original one. I think if the last two years of scandal have taught us anything, it's that Tiger Woods is quite the douche. Stories and anecdotes about his icy/standoffish/awkward/hyper-competitive behaviour have abounded for years, though that didn't stop him from becoming one of the most popular athletes in the world. The difference is that now, Tiger isn't winning tournaments. One man's "in the zone" is another man's "acting like a dickhead." As the saying goes, it ain't bragging if you can do it, and since Tiger was devoting his life to winning 19 major championships and getting really close to that goal, well, hey, the man is simply doing what he set out to do. If anyone else set out to climb Mount Nicklaus, however, we'd roll our eyes if they suddenly shaped their entire personality towards being a single-minded golf cyborg. If you have an obsession and achieve it, congratulations, you're Alexander The Great. If you fail in your obsession, you're Captain Ahab. You might argue about Alexander's methods, but hey, "Great" is right there in his name, whereas nobody thinks Captain Ahab is a cool guy.

Tiger is such a dick, it seems, that people are forgetting the fact that for much of the last decade-plus, it's been Stevie Williams serving as the bad cop of the Tiger Woods family. Just mere months ago, it was Williams who was considered to be a douche for shushing fans, yelling at cameramen and acting more like Tiger's bodyguard than a caddie. Now, everyone is a Stevie Williams fan just because he showed up Tiger at the Bridgestone. The fans are the least to blame, since I guess for anyone who's been fired, the Scott/Williams victory represents a bit of vicarious joy over getting back at an ex-boss.

For the media and the golfing world, however, the "Tiger Woods Is A Douche" meme requires some introspection. Tiger's douchebaggery did not happen inside a bubble, no matter how private the man was and still is. It was the media, remember, who have championed the idea of Tiger's "single-minded focus on winning" as something to be emulated in all walks of life, not just golf. The Story was how Tiger Woods was the greatest golfer of all time. In the last several months, however, The Story has become Tiger's fall from grace, and thus the knives are out from all sides. Now that Woods is seemingly no longer the PGA Tour's golden goose, the media and larger golfing world are free to crap all over the man.

I'm not saying that this is undeserved, since as I noted, Tiger is an asshole. But man, the chorus of tut-tutting is getting tiresome. I'd reckon that there have been thousands of "Tiger needs to show more respect to the fans, the sport, etc." stories written that fateful night in November 2009 when Tiger's private life exploded, but what I'm interested in are the stories written along those lines BEFORE the scandal. At least a few writers had the balls to call Tiger out on his nonsense back when he was on top of the world, and after years of being accused of eating sour grapes, it turns out those guys were telling the truth.

Perhaps the biggest example of what I'm getting at is in the weeks immediately following the news of Tiger's marital infidelity and his subsequent hiatus from the PGA Tour. Tom Watson, as you would expect, was asked his opinion on what Tiger should do when he returned to playing, and Watson made the obvious point that Woods should be contrite about what he'd done. Then, Watson took a left turn and went off on how Tiger needed to live up to the professional standards of other golfing greats by not swearing or throwing clubs while on the course. This statement, if anything, told me that Tom Watson himself was also probably an asshole. This wasn't advice, this was Watson's pet peeve for the last 13 years, though only at Tiger's lowest ebb did he suddenly get the stones to bring it up.

It's very, very easy to take shots at Tiger Woods right now, as Stevie Williams showed in his post-victory interview. But, let's also take a moment to remember why Williams was being interviewed in the first place, since you see post-victory chats with caddies about as often as you see a pig fly. Woods is still the straw that stirs the PGA Tour's drink, a status that he achieved both by his incredible record and the fact that since 1996, the Tour and its media partners have been focused on hyping Woods as much as humanly possible since it meant money in the bank. Everyone seemed to know Tiger was an asshole in 2000-01 when he won four straight majors. Everyone seemed to know he was an asshole when he won the 2008 U.S. Open on one leg. Why is it that now, when Tiger isn't winning tournaments, that his being an asshole is suddenly an issue?
Posted by Question Mark at 5:01 PM

Good write-up. He IS an asshole. Countless times he acted aloof and standoffish with the press. And with fans at times.

Unless the press or fans had nice boobs and were white of course. (Sorry, I'm just being facetious with that last comment.)