Holy Smoke (NFL Playoffs, Round One) 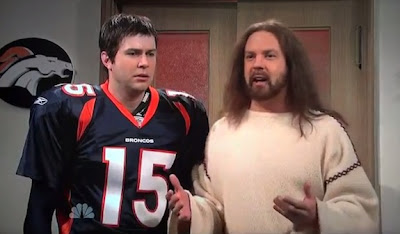 * Steelers over Broncos
Ok, my thoughts on Tim Tebow. They are not too surprising; I think the guy's a pretty lousy quarterback. Sure, the 'Tebow Time' thing is entertaining and all, but let's be honest, even during Denver's implausible six-game winning streak, all those close wins came against lousy teams. The Broncos beat their three mediocre AFC West rivals, the Vikings (terrible), the Jets (overrated clowns) and the Bears (terrible after losing both Forte and Cutler). It's not like Tebow was pulling these incredible last-minute victories over other playoff teams.

So with the Broncos making a pretty good case for being the worst playoff team in many years, the only thing that could stop Pittsburgh in this game is if they're totally crippled by injuries. Ben Roethlisberger is still banged up. Rashard Mendenhall is gone for the entire posteason. Ryan Clark's body may explode if he plays another game in Denver. All these knocks might lead Denver to covering the spread in what'll probably still be a somewhat close game despite the fact that Pittsburgh is a way, way better team…..but come on, the Steelers have got this one.

CHANCES AGAINST THE PACKERS: Zero percent for Denver. If the Broncos were to somehow get to the Super Bowl and actually beat Green Bay, I'd tattoo Tebow's name and the Bible verse of his choice on his back. Pittsburgh, on the other hand, is a much more serious threat, and they're actually my pick to make it out of the AFC unless injuries totally kill them. I'd give the Steelers (presuming Roethlisberger plays) a solid 43% chance of avenging last year's Super Bowl and knocking off the Pack.


* Texans over Bengals
This is the toughest pick of the first round since both of these teams definitely got into the playoffs through the back door. Houston clinched their first-ever playoff berth in Week 14 (upsetting who else but the Bengals in Cincy) and then had a much-needed three-week virtual bye, since half their team is nursing injuries. While the last three games weren't games that the Texans needed to win, they're stone-cold right now. It's hard to get that momentum back after so many weeks of phoning it in, even despite the fact that Andre Johnson, Arian Foster and other injured starts will apparently be back in action.

The Bengals have the opposite problem. They've been playing hard right down to the wire to clinch their playoff ticket, but barely edging the Rams and Cardinals and then looking out of gas against Baltimore doesn't exactly a team much steam going into a road playoff game. Cincinnati has exactly two quality wins this season --- they won in Seattle and in Tennessee, and since neither the Seahawks or Titans made the playoffs, these are definitely 'quality' with a lower-case Q. It's easy to see this being a one-touchdown game (it will have to be for the Bengals to have any chance), but in the end, I think Houston will be able to flip the switch enough to get a close victory. Of course, I reserve the right to completely and utterly switch this pick if Jake Delhomme ends up playing for the Texans.

CHANCES AGAINST THE PACKERS: I'd put it at 15% for both teams. For either Houston or Cincinnati to reach the Super Bowl they'd have to go on an incredible roll, and of course you never want to be facing a red-hot team. But really, I don't think either team brings anything to the table that Green Bay can't handle --- if Mario Williams and Matt Schaub were playing for the Texans maybe I'd be worried but the Packers can beat the Texans' B-team.


* Saints over Lions
When it comes to playing at home, the Saints are Superman, Rocky Marciano, the Undertaker at Wrestlemania and the Unsinkable Molly Brown all rolled into one. I don't think any team in the NFL can top the Saints on their home turf so Detroit, sorry dudes, your nice comeback season is going to come to an abrupt end. Can the Lions (no strangers to scoring points themselves) find a way to actually disrupt New Orleans' offense and win this game? Probably not, since in the time it took me to write that previous sentence, the Lions drew two penalties.

CHANCES AGAINST THE PACKERS: It's always tough to play a division opponent in the postseason since they know you so well and all bets are virtually off. However, Green Bay has beaten Detroit twice this year, once at Ford Field when the Lions embarrassed themselves with a zillion penalties, and once at Lambeau when the Lions allowed the freakin' backup QB* to throw for six touchdowns and 480 yards. So, it's safe to say the Packers have the Lions' number, which is why I'd give Detroit just a 10% chance against Green Bay in a hypothetical second-round matchup. As for the Saints, well, I'm goddamn terrified of the Saints. New Orleans is a different team on the road but they can match the Packers point-for-point for a shootout and nearly did that very thing in the season opener at Lambeau. I want no part of a Green Bay/New Orleans NFC championship game but I believe I'll be seeing it. I give the Saints a 49.5% chance of beating Green Bay.

N.B. I can't wait to see which quarterback-needy team signs free agent Matt Flynn to an eye-popping contract this offseason. The Seahawks? The Browns? The Dolphins? The Redskins? The most headline-grabbing (and kinda hilarious) options would be if Flynn winds up with the Jets or Broncos.


* Falcons over Giants
Atlanta is another team that's in the postseason due to a somewhat fortunate schedule since they're seriously lacking in quality wins. But, I've got to pick them over New York simply since I think the Giants are incapable of getting their shit together for an extended period of time, especially at home. After two straight big wins to clinch the NFC East title, it would be so Giants (in the manner of "that's so Raven") to totally lay an egg here against the Falcons. Surely Victor Cruz can't bust out a monster TD catch every single week, right? I confess, a large part of me thinks New York will actually win here and prove the Falcons are frauds, but I can't ignore the fact that upsets happen every single year in the NFL playoffs and I need at least one underdog to triumph in first round. So, if you're a betting person, the smart money is probably on the Falcons getting trounced, followed by the Bengals, Broncos and Lions all pulling off wild upset victories, leaving my ProLine card a shattered mess.

CHANCES AGAINST THE PACKERS: Atlanta has lost twice to Green Bay in the past calendar year, both times at the Georgia Dome. If they can't beat them at home, they sure as hell can't beat them on the road at Lambeau in January, so the Falcons have a shiny zero percent chance of beating Green Bay. New York on the other hand, I'll give up to a 40% chance of the upset. The Giants are capable of beating any team in the league and losing to any team in the league --- they're so hot-and-cold that when they're firing on all cylinders, it's easy to see them beating the Packers. Heck, they almost did on December 4, dropping a tight 38-35 result to Green Bay. After Super Bowl 42, I will always be very wary of Tom Coughlin and Eli Manning's weird anti-magic.
Posted by Question Mark at 11:56 AM