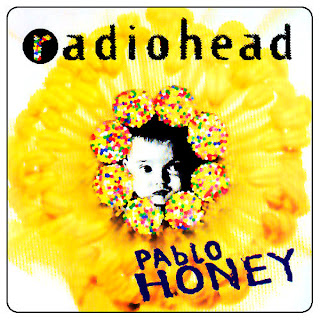 Pablo Honey was released in 1993 and it's hard to have a 20-year remembrance of an album that everyone seems to have agreed to have forgotten.  Radiohead never play its songs in concert aside from the very rare performance of 'Creep.'  Critics ignore it, just starting at The Bends when beginning their discussions-cum-hagiographies of Radiohead as the most important band of their generation.  Fans of the band essentially remove it from the band's discography; even I, who owns a physical copy of every other Radiohead album, don't have a Pablo Honey disc, having to borrow the record from my brother for the purposes of this re-listen.

It was the first time I'd listened to Pablo Honey in a good half-decade and, in my life, I could count my listens of the record on one hand.  It's odd how narrative can sometimes take over a piece of art --- knowing the whole Dan Harmon saga can affect one's enjoyment of new Community episodes, Mel Gibson's old comedies have been ruined by his modern-day idiocy and one can't watch the original "Blade Runner" without missing the effects of Ridley Scott's various director's cuts and spending half the movie wondering who's a replicant.  As such, as a young Radiohead fan, I perhaps simply ignored Pablo Honey since that was that you were supposed to do as a Radiohead fan.  It didn't matter.  When I went to see Radiohead live in 1997, just four years after the disc's release, "Creep" was the only Pablo Honey track on the setlist.  PH was an easily-omitted, and almost necessarily-omitted, oddity from the band's catalogue.

It's too bad since the album is, taken solely as an album, pretty good.  Radiohead haven't locked it away in the attic out of sheer embarrassment, they just no longer have any connection to the music that bears little-to-no resemblance to the music they've been making for the rest their careers.  Pablo Honey doesn't count like Radiohead --- it sounds like, at various times, the Cure, the Clash, David Bowie, U2, the Jam, the Smiths, Manic Street Preachers and probably a bunch of other British alt-rock acts that I don't even know exist.  There's nothing unique about the songs other than the fact that they're all (as I noted) pretty good.

They're unique in the Radiohead canon, though, since they're all just Songs.  No odd sonic experiments or tuneless electronica here, they're all songs that have actual verses, choruses, middle eights and once in a while they even mention the song's title in the lyrics.  The Bends is largely the same way, though if you heard The Bends and King Of Limbs back-to-back, you could guess it was the same band.  Pablo Honey contains no such hints aside from Thom Yorke's voice.*  If you didn't know better, you would swear that Pablo Honey was made by a forgotten British alt-rock band who was fronted by Dhom Yorke, Thom's long-lost brother.

* = though Pablo Honey and The Bends sound similar to each other.

Would I have been a Radiohead if they had continued making albums in the vein of Pablo Honey?  Probably not.  While Radiohead can certainly go overboard with their experimentation in their modern recordings, their sweet spot is when they create a beautiful melody amidst innovative production.  That's when they're great, and Pablo Honey doesn't have anything that reaches beyond being good.  Even 'Creep,' which is still a legitimately terrific song even though you've heard it a million times and it may sound better when performed by a choir, doesn't stand up against greater songs Radiohead produced later in their careers.  If I ever do a "top 100 or whatever Radiohead songs" post like I've done for U2, Bruce Springsteen and the Beatles, I doubt "Creep" cracks the top 30.

Usually when a band or musician has a first album that sounds nothing like the rest of their discography, it's not for a positive reason.  It could be a band whose first album is awesome and then they spent the rest of their careers just making copies of that first record trying to recapture the magic.  Or, if could be an artist who has a complete change of musical direction and whose first recordings are, for all intents and purposes, made by different people; think of the albums made by Alanis Morissette before Jagged Little Pill, for instance.  Radiohead, unique as ever, did their "departure" on their very first record.  They produced it, it was good and then they said that's that and put it on a shelf for virtually all time, just like a bee doesn't think about the honey it produces.  A bee named PABLO…oh my god, I cracked the code.

Posted by Question Mark at 4:06 PM