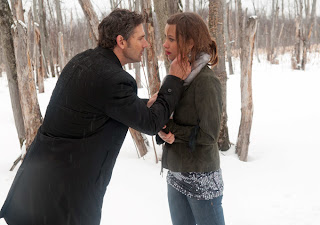 Congratulations Olivia Wilde!  You are the new recipient of the Eric Bana Award!  In fact, we'll do it one better and re-name it the Olivia Wilde Award in your honour!  Huzzah!

Readers, get ready to be shocked --- I was nerdy back in high school.  (Yes, that's right, ME, winner of the Internet's Coolest Blogger trophy in 2007, 2008 and 2011.)  While the other kids were out partying their weekends away, I spent my Saturday nights at home watching Saturday Night Live, classic movies on TVO and all sorts of weird programming on "The Drambuie Showcase Review."  This was an evening of programming on Showcase that consisted of a rotation of random old comedies and usually a somewhat artsier movie.  The first time I saw Pulp Fiction, for instance, was at the back end of a night of Drambuie Showcase programming.

Yet for a young comedy fan like me, the sitcoms were the draw.  The three that I recall showed up the most often were CODCO (the Canadian sketch show that was the forerunner to 'This Hour Has 22 Minutes'), Red Dwarf (the BBC sci-fi spoof), Blackadder (if I have to tell you what Blackadder was, god have mercy on your soul) and a show called Full Frontal.  Now, don't jump to conclusions when I say that I watched a late-night Showcase program called "Full Frontal" --- it was actually a sketch comedy show from Australia.  It was pretty clever for its time and two of the performers really stood out to me.  One was Shaun Micallef, kind of a Steve Coogan type who has starred on Australian TV for the last 20 years in various projects and who once had a monologue on Full Frontal so funny that I literally tried to transcribe it once during a rerun.  Ah, the days before the internet.

The other standout performer was, as you might've guessed, Eric Bana.  Now, admittedly, I was kind of impressed but in a backhanded way.  I was under the impression that these shows were all curiosities, late night filler, and while I enjoyed some of the performers and whatnot, I assumed this was more or less their career peaks (Rowan Atkinson aside, I suppose).  Using CODCO as the example, while most of that crew went onto 22 Minutes, being the big wheels in the cracker factory that is Canadian television didn't quite count as "famous" in my book.

So it was with some surprise that years later, when I was watching Black Hawk Down*, who should I see pop up as the badass Delta Force solider but Bana himself.  I was stunned that this guy from what I presumed was an obscure Aussie comedy had booked a major role in a major Hollywood production.  Bana also broke out with Chopper, a very dark comedy about a lunatic criminal that is still quoted to this very day by my group of friends.**  Clearly, 2001 was Banatime.

** = "ol' Keithy George has done himself a mischief" whenever one of us does something dumb, and, "virtual carte blanche" from a scene when a cop incredulously asks Chopper if he's "telling people the police have given you virtual carte blanche to commit crimes?!"

Unfortunately, Banatime was short-lived.  Here were his next few starring roles…

-- Hulk.  Now, I've written about Hulk before and while I respect that Ang Lee was trying something different with "a comic book movie," this movie was terrible.  Specifically, the first third was weak, it had a really interesting middle third and the last 20-30 minutes was some of the worst filmmaking I've ever seen.  Just an utter travesty of an ending.  Not the best way for Bana to break his first big North American starring role.

-- Troy.  The epitome of the generic summer action movie.  I forgot everything about this movie five minutes after I left the theatre.

-- Munich.  Given the talent involved, still can't figure out how this one went so far off the rails.  First 30-40 minutes, it's a terrific thriller.  The rest?  Just lousy.  The scene where Bana is literally orgasming while having flashbacks to the hostage massacre gets my vote as the worst movie scene since…well, since the ending of Hulk.

-- Lucky You.  Completely generic rom-com with Drew Barrymore.  Fun fact: I went to see this film with a platonic female friend of mine, though it was one of friendships where I would definitely have been open to the idea of kicking it up a notch had she had any interest in me whatsoever.  Anyway, whatever miniscule "so you're saying there's a chance!" shot I might've had with her was reduced to less than zero by this movie since it was *my* choice if you can believe it.  I was all, "hey, you like Drew Barrymore, I like Eric Bana and poker, it should be fun!"  Boy, that was off base.  Ol' Marky George really did himself a mischief with this pick.  If I can't even give a good movie recommendation to a woman, what else do I have to offer?

-- The Other Boleyn Girl.  In fairness, I never saw this one, but the reviews were lukewarm at best.

So all in all, this was a pretty rough go for ol' Chopper.  It was distressing since I had gotten on the Bana bandwagon, heretofore known as the Bana-dwagon.  I had a rooting interest in the guy who I'd seen goofing it up in sketches years ago and was now trying to make it in Hollywood.  Unfortunately, he just kept making career choices that looked good on paper but went awry in practice.

It was then that I developed the idea of the Eric Bana Award, named in honour of an actor who I liked and thought was talented despite the fact that they were in consistently poor movies.  It was a long and proud run for Bana but he finally broke the schnide in 2009 by appearing as the villain in Star Trek and as the titular time traveler in The Time Traveler's Wife, which I liked even if it was generally meh'd by the moviegoing public.  Bana even did a victory lap by starring in Hanna, which was awesome.

(Now, you might notice that my whole idea was flawed since obviously, Bana WAS in a good movie to start with in Black Hawk Down, plus Chopper was entertaining AND Bana also voiced a character in Finding Nemo.  So that's three quality films right off the bat.  So really, I have no point, but stay with me on this.)

So with Bana having achieved success, I'm forced to pick a "new Bana" and the choice is clearly Olivia Wilde.  Really, who isn't an Olivia Wilde fan?  She's easy on the eyes, seems like a fun person in interviews and while I don't think she's a great actress, I think she's a good actress.  My parents were big House fans* and always thought she was really good on that show, so she has that going for her.  It could be that she might pull a Bradley Cooper and exceed our expectations of her abilities if she ever finds a role or a film that isn't a pile of crap.

* = though my dad was pretty confused to learn that Wilde is often at or near the top of the 'most beautiful woman in the world' lists in the lad mags.  He's never seen Arrested Development but he gave a Michael Bluth-caliber "her?" at the news.  My dad isn't shy about noticing a woman's beauty but I guess Olivia Wilde isn't his cup of tea.  Unless he was implying that he felt my mom should've been at the top of the rankings…awwww….. #41YearsOfMarriage

….and MAN has she ever been in some crap.  Holy moly, her IMDB page is a hit list of mediocrity.  Year One!  Cowboys & Aliens!  The Change-Up!  In Time!  Turistas!  Alpha Dog!  TRON!  Deadfall!  The Incredible Burt Wonderstone, which I saw last week and inspired this post.  There isn't an Olivia Wilde movie that I'd want to see again.

It's Deadfall that stands out on the list.  It's a pretty rote thriller about criminals on the run and their adventures in a rural community, but it's notable due to the cast.  The two criminals are played by….Eric Bana and Olivia Wilde!  It was fate.  It was like a symbolic passing of the torch.  Wilde now carries the banner proudly (well, not proudly) until she can finally get a good role in a good film.  Godspeed, Olivia.  Godspeed.  Clearly what she needs to do is play the villain in Star Trek III; who's up for Wilde as the JJ Abrams Trekverse's version of the Borg Queen, eh?  Eh?

Addendum: I should note that Rose Byrne had a crack at this title as well.  She caught my attention in 2004 with her obsessed-yet-weirdly-sympathetic role in Wicker Park and then didn't appear in an honest-to-god legitimately really good movie until Bridesmaids seven years later.  That said, Byrne did appear in Sunshine (which kind of went off the rails as well but is overall an interesting and ambitious sci-fi flick) and Get Him To The Greek, which was a trifle but had its moments.  So I can't really say she was in a *total* stretch of crap.  As coincidence would have it, Byrne and Bana a) are both Aussies, and b) were both in Troy, though I don't recall her at all since, as I mentioned, I remember virtually nothing about that film.

Posted by Question Mark at 3:40 AM