I Am Terrified Of The Arizona Cardinals 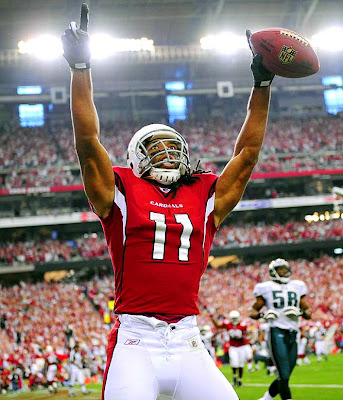 The Cardinals are hot, cold, up, down, good, bad and an altogether tough team to figure. They usually don't have a lot of middle ground -- they either blow out their opponents or play like month-old garbage. As little as a month ago, it looked like they were finally playing like a consistent winner, but then boom, brutal loss to San Francisco (seven turnovers!), wins over Detroit and St. Louis (which don't even count given the awful competition, and even then, the Lions game was only decided by seven points) and a phone-it-in performance in their meaningless Week 17 game against the Packers.

So this is why I'm worried. After a virtual month off, it wouldn't surprise me in the least to see the Cardinals suddenly rediscover their A-game and beat the the crap out of Green Bay. As well as the Packers have played over the last two months, Arizona is easily capable of matching or topping that level of play. Just look to last year, when the Cardinals stumbled into the playoffs and then went on a tear and came within a minute of winning the Super Bowl.

Overall, however, I still think the Pack will win the game. I'm still sort of stunned at how things have turned out this season. Two months ago, GB was 4-4 and had just lost a pathetic game to the previously-winless Bucs, and I thought that was it for not just this season, but the whole Ted Thompson/Mike McCarthy regime. You get embarrassed twice by Brett Favre and then lose to the friggin' Bucs? That's it, clean house, burn it down and start over. Little did I know that the loss would wake the Packers up and they'd go 7-1 the rest of the way. The defense turned things up a notch, the offensive line stopped giving up 6,000 sacks per game and Aaron Rodgers continued on his MVP-esque pace. I really don't see a lot of weaknesses in Green Bay's game right now, aside from their propensity for taking stupid, stupid penalties, but this is also a team that I've flip-flopped on about six times in the last six months. So who the hell knows at this point.

Mike Lombardi made a good point on this week's Bill Simmons podcast about how this game will come down to the refereeing crew. As some critics (i.e. my father) like to point out, the Green Bay defense is a bit, shall we say, handsy. Charles Woodson, for instance, could be accused of holding on, oh, say, every play. So if we get a team of officials in Arizona on Sunday who call things tight, that could lead to a lot of big pass interference penalties since you know Kurt Warner will be throwing deep all day long. Woodson can handle one of Arizona's big receivers, but unless Anquan Boldin is actually hurt, the other side of the field (manned by the intrepid but mediocre Tramon Williams) could be a powderkeg for Green Bay.

I'll pick the Pack, but with an asterisk. If they get more than 10 penalties, they're losing. If they get fewer than 10, then they'll probably win. In short,


* Philadelphia over Dallas. I'm obviously the only one who still thinks the Cowboys are a mirage. They were dead and buried three weeks ago, and now they're suddenly a division champion thanks to three soft wins (over the unbeaten but struggling Saints, the finished Redskins and an Eagles team that was clearly holding back for the playoffs) and everyone is ready to anoint them NFC champions. I don't buy it. Until Dallas actually wins a playoff game, I can't pick them. The Eagles are too solid to play like crap two weeks in a row against the same team. Fun stat: while everyone knows that Dallas hasn't won a playoff game since 1996, Philly has a perfect record in their opening playoff games since 2000. That's right, the Eagles are 7-0 in their playoff opener (whether it's in the wild card or divisional rounds). They save their chokes for the NFC title game. Those are two mighty big streaks to be betting against if I predict a Cowboys win, so go Eagles go.


* Cincinnati over New York. Really a coin flip of a prediction here since I have no idea how this one will play out. The Jets destroyed Cincy last week but that game was totally meaningless to the Bengals. I think I could've rounded up ten guys from my block and given more of an effort than the Bengals did in that game. (Mr. Ernst, my surly elderly neighbour, would've torn a strip off of Mark Sanchez for walking on his lawn.) You can make a case that the Jets are lucky to be here given their last two opponents laid down for them, but Cincy has been lousy for the last two months and are definitely looking like a team that blew their wad too early. Also, the Bengals' main offensive weapon (Ochocinco) is almost surely getting shut down by Darrelle Revis. I hate to pick a team quarterbacked by someone as inconsistent as Sanchez, but...wait, I guess I don't have to. Screw it, I'll take Cincinnati. The Sanchize is terrible. But again, I have no idea what will happen here. Technically, I have no idea what will happen in any of these games, but please ignore that.


* New England over Baltimore. Damn Wes Welker. If he's healthy, I pick the Patriots without much problem. But without him, well, who knows. NE's offense was basically hanging by a thread, and that thread was Welker. Without him, Randy Moss gets double-coverage and the Pats have to rely on their cadre of useless running backs. You'd think that this would mean I'd pick Baltimore, but the Pats are unbeaten at home this season and generally don't make dumb mistakes (unlike the Ravens, who were just somehow flagged for a penalty just as I'm writing this sentence two days before the game). I'm going to pick the Pats to barely eke one out before they get nuked by Indy or San Diego in the next round. Besides, if I picked the Ravens, I would be picking my brother's favourite team. That can't happen.
Posted by Question Mark at 1:35 PM