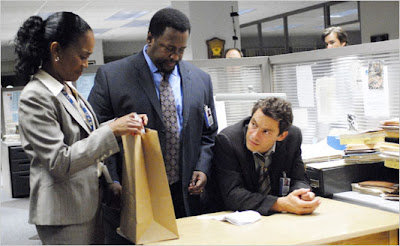 Some friends recently asked me if I was going to be doing any sort 'best of the decade' posts for movies, music, TV, etc. and in all likelihood, I probably will over the next couple of weeks. With that in mind, it's a good thing that (at long last) I finally sat down and saw 'The Wire' after literally years of the series being on my must-watch list. And then I say that I sat down and saw it, brother, it wasn't half-assed --- the entire series (all 60 episodes) in a three-week span. It was intense. One of those days included a nine-hour marathon of episodes that left me so Wire-intensive that I used 'CoolLesterSmooth' as a password for a new e-mail account. (And now, of course, it's a password that I will immediately change now that I've used it in this anecdote. Maybe I'll change it to 'MyNameIsMyName.')

You don't need me to tell you that 'The Wire' is one of the truly great shows in TV history, arguably the best of all time. It's sprawling, ambitious, surely a bitch to actually conceive, write and produce and yet at the same time completely focused on its goal of providing a snapshot of how various civic institutions operate in Baltimore (and by extension, the world) in modern times. What separates 'The Wire' from other great shows is that everything is interesting and everything works. Take virtually any other show; they have their weak storylines, characters or even full seasons. 'The Wire' hit on everything for five seasons straight. Given the scope of how many characters and stories were told over those 60 episodes, that's mind-boggling. The only other shows I can think of with a similar success rate are shorter-term British series like the UK Office or 'Fawlty Towers,' and the only North American example that pops to mind is 'Arrested Development.' Actually, that's not a bad comparison --- imagine AD, except each episode is an hour long, set in Baltimore, with an even larger cast of characters and more intricate, layered running storylines, and decidedly not funny aside from a few necessary comic relief moments.

It's been an interesting five years (give or take) of putting off watching the show once I started hearing the overwhelming positive buzz around it. It grew to the point that I decided to just wait until the series was completely done so I could enjoy it in one fell swoop. Also, frankly, I'm not sure the show would work as well if watched in weekly installments. Given how many characters and stories are juggled, you're almost obliged to watch a few eps in a row to get a handle on everything and everyone. And now that I've finally seen the damn thing, I can finally unlock myself from the self-imposed 'Wire' cone of silence I erected over myself to avoid spoilers. Frankly, I think I did quite well. Before I sat down to watch the pilot, I knew five things about the series....

1. It was fucking great.
2. It was about the Baltimore drug trade.
3. Characters had such iconic-sounding names as Stringer Bell, Avon Barksdale, Marlo Stanfield, Brother Mouzone, and one ultra bad-ass known simply as Omar.
4. It starred Amy Ryan, Idris Elba, Dominic West and Lance Reddick, all of whom I had seen in other shows and movies and whose entrance into those various media had been heralded with joyous cries of 'all right, it's so-and-so from The Wire!' by message board fans. Oddly enough, aside from Ryan (great on The Office and in Gone Baby Gone), those latter three guys didn't really do much for me. Reddick didn't get much to do on LOST, Elba's own 'Office' stint was somewhat underwhelming and as for West, I knew him primarily for his awful, awful, performance as Jigsaw in the Punisher sequel. That largely brutal movie is almost worth seeing for just how much West overplays that role. He was so bad that I actually looked up his IMBD profile so I could make a note of this brutal actor's name, and colour me shocked when I found out he was the star of the legendary 'Wire' series.
5. Seriously, it's really fucking great.

Given my propensity for all things television, managing to stay this in the dark about the most acclaimed series of the last decade was pretty impressive. Huzzah for me! This is a streak of willful ignorance that is usually only matched by southern Republicans. But while I brag, don't follow my example, kids. Watch 'The Wire' right now. Make it your new year's resolution for 2010. Set aside several days, since once you begin, the episodes become as addictive as the stuff that Bubbles shoots into his veins. It actually just may be the greatest television series of all time.
Posted by Question Mark at 2:38 AM