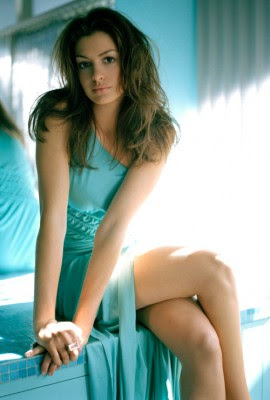 "Mark, are you trying to get more blog traffic by including pictures of sexy actresses with your posts?"
"Yes."
"Okay, just checking."

I'm going to geek out for a bit and talk about the latest Spider-Man 4 casting news. On paper, the idea of Anne Hathaway in Spider-Man 4 is a terrific one, since really, who doesn't like Anne Hathaway? But seriously, the "Vulturess"? Huh? Even odder is the concept that Hathaway will be playing Felicia Hardy, but she'll just be a different super villainess than Black Cat. Again, huh?

First, the concept of the Vulture having a similarly-gimmicked female sidekick reminds me of the old Batman TV series, when the Joker or Penguin or whomever would have their team of henchmen named 'Giggles,' 'Chuckles,' 'Sparrow,' 'Condor.' or whatever the villain's theme entailed. (I always wondered, did the henchmen get to pick these names or did the villain assign them? I would guess it's the latter, since no self-respecting hard criminal would voluntarily call himself Sparrow. Then again, they were fighting a guy known as Robin, so who knows.) In addition to the thugs, the Batvillain also had a female cohort as part of the gang, whose entire role seemed to consist of either....

Of course, in the macro sense, these female sidekicks only existed to give the male-heavy show some eye candy, which I'd guess is also the logic behind the Vulturess. But I'm a bit confused --- if you're going to have a new character, then why let it be known that Hathaway is Felicia Hardy? That would be like Chris Nolan announcing that, say, Bob Hoskins will be playing Oswald Cobblepot in the next Batman movie, but then having Oswald have all of Clayface's powers and never make any reference to the Penguin.

Actually, the upcoming Batman installment might play a role in this odd casting decision. Since there are a number of rumours that Catwoman could be the villain in the Dark Knight sequel, there's a school of thought that argues that Sam Raimi doesn't want to feature Black Cat since, let's be honest, Black Cat is more than a bit of a conceptual rip-off. But okay, so if you don't want Black Cat, when just call Anne Hathaway's character 'Jane Smith' or something and forget the Felicia Hardy name altogether. And for the love of god, come up with a different name than 'Vulturess,' which sounds less like a villain and more like a sound your garbage disposal makes when it's backed up.

The other problem here is that Spider-Man has such a deep and varied roster of enemies that it seems pretty lame to invent a new one for the movie. Part of the problem could be, I suppose, that if Raimi wanted to freshen things up and give Spidey a woman to battle, there are surprisingly few female villains in Spider-Man's history. Black Cat is probably the most prominent, and she's been a hero for the better part of 20 years. I read a whooooole lot of Spidey comics as a kid, and literally the only notable female villains I could think of off the top of my head were Shriek, the short-lived female Doctor Octopus, Titania, Stunner and.....that's it. Seriously, five semi-major female enemies in almost 50 years of publication, and it's a stretch to even consider Stunner and female Octopus "semi-major" (plus, Titania is more of a She-Hulk villain).

If I were a filmmaker faced with the dilemma of wanting Anne Hathaway in my upcoming Spider-Man movie but not having any particular role for her, I'd ditch this whole Felicia Hardy/Vulturess nonsense and just have her play Mysterio. Now there's a character who could be considered a major Spidey villain, and yet the gender is really kind of a non-factor given that Mysterio's whole gimmick is that he uses illusion and deceit to commit crimes rather than brute force. The Mysterio character has been adopted by a few different villains over the years, so there wouldn't be such a continuity issue with someone other than Quentin Beck wearing the ol'fishbowl and purple cape. Besides, giving Spider-Man a female villain that he'd have to outwit rather than fight neatly sidesteps that always-awkward moment in superhero movies when the male hero is openly slugging a woman in the face. I mean sure, if a woman was trying to violently murder me, I'd have no qualms about cold-cocking her, but I'm not sure that's the message you want to translate in a PG-rated movie. (Disney always found a way around this --- Maleficent in Sleeping Beauty turned into a monstrous dragon before being killed, the Queen in Snow White was hit by lightning, etc. That Walt Disney might have been a dirtbag Nazi sympathizer, but he sure had a soft spot for domestic violence.)

Two positive notes to end on....

* John Malkovich is just about perfect casting as Vulture. No problems at all with that choice from Raimi. The only better possible option would've been Ben Kingsley, who apparently was interested in the role when Vulture showed up in an early draft of Spider-Man 3 as Sandman's cellmate and bad influence. Since this casting would've also meant that Venom wouldn't have been in SM3 and we probably would've gotten a better movie out of the deal....crap! (Note: I'm getting this information from Wikipedia, so of course it has to be true.)

* There actually is some comic-book precedent for a female Vulture character, as Spider-Girl (Peter Parker's alternate-universe daughter) has an enemy known as the Raptor, the Vulture's daughter. If this is the idea that Raimi is using for his movie, then I have to object to the casting. Why use Anne Hathaway when Andrea Bargnani is right there? He plays for the Raptors and he has a girl's name. Done and done. It might seem odd to have John Malkovich as the father of a seven-foot-tall Italian, but hey, it's a comic book movie. Some liberties need to be taken.
Posted by Question Mark at 10:23 PM