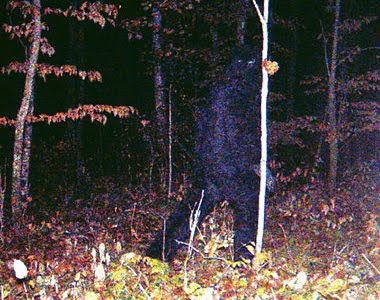 As you all know, October 24 is already recognized as a worldwide holiday due to being my birthday, but now it may have a second designation attached to it --- NATIONAL BIGFOOT DAY!

Now, you might argue that it seems a bit too early to go overboard, given how the only apparent evidence is a grainy photo of what looks like a guy in a splash pants and a rain jacket. BUT, just imagine if that picture ended up being the key hint we need to finally proving Bigfoot's existence and ending his reign of hairy terror (hair-or) within North America's woodlands. Since the picture was taken on October 24, my birthday would live in infamy as the day that man finally overcame nature. Eat it, Bigfoot. First you drive John Lithgow to tears, and now this. (Though, in hindsight, maybe Harry was lucky he didn't end up in a bathtub with his throat slit for pissing Lithgow off.)

The downside, of course, is a 'National Bigfoot Day' somewhat overshadow the glory that is my birthday. Some people might even more commonly celebrate Bigfoot Day over 'Mark Appreciation Day/Month.' Normally I'd be upset about this, but I wouldn't mind sharing 10/24 with Bigfoot. Poor guy, living in the woods all this time, evading humans in the same way that reality TV stars lack self-awareness...it's hard not to feel a bit sorry for the big lug. A holiday in his honour would be the least we could do after years of hunting and torment. Besides, Bigfoot and I have much in common. To wit, we both have big feet. And ladies, you know what they say about guys with big feet....they also write big, borderline amusing blog posts about a goddamn Bigfoot hoax.

NB, my favourite part of the article is when the hunter and his sons all agree that they would never take a shot at Bigfoot because "it has every right to live." They apparently said this with straight faces WHILE THEY WERE OUT DEER HUNTING.
Posted by Question Mark at 10:57 PM