Sports From Movies And TV Shows I Wish Were Actual Competitive Sports
(a.k.a. Listamania V)

A game that would push the boundaries of human degradation. Hook the contestants up to lie detectors and they lose points if they lie in their answers. Imagine the sweeps month ratings when family members or spouses face off against each other. Or, even better, Celebrity I Never. This might be the event that would explode the E!Network.


12. Illegal Street Racing (The Fast and the Furious, American Graffiti)

This is a sport where the actual races would be secondary in excitement to the extensive pre and post-race interviews that I would demand from the competitors. Nothing says comedy like one testosterone-laden fool trash-talking another. The entire sport could be both entertainment and a cautionary tale for HGH. If you need a venue, I propose Lakeshore Boulevard in Toronto. Driving under the QEW creates a nice French Connection-esque chase vibe, and the waterfront adds some scenic aspects to the TV coverage. Which, of course, would feature Joe Buck and Vin Diesel on commentary.

Just replicate the whole thing from the movies. The absurd teams, William Shatner, the rules, the costumes....everything. Throw in a bonus qualifying event that involves wrenches being thrown at people. Perhaps this can be punishment for the losing squad.

Does anyone know the actual rules of tetherball? It's bizarre -- every schoolyard in creation has a tetherball post in it, yet nobody knows how to play. Here's the deal: two players must stand on either side of the pole and hit the ball with either an open palm or with a fist. The object of the game is to hit the ball hard enough that the opposing player is unable to return it and the ball ends up twisted around the pole. Seems simple. Just imagine two experts at this game smashing the ball back and forth at incredible speed. It would be like watching two ping-pong experts square off. To continue the ping-poing analogy, I wouldn't expect pro tetherball to be a big success, but rather a niche sport like ping-pong. You'd only see it on Sportscentre when a once-in-a-lifetime highlight would occur, like this one here.

Boxing already exists, but I'm talking about the version that we see Rocky Balboa practice. The kind of boxing where the sweet science of boxing is reduced to the simple act of bashing another man in the face as hard as you can. Blocking? What's that? Dodging punches? Huh? None of the technique crap that slows down actual boxing can be found here. You see a fight like this in actual boxing every few years (the Gatti-Ward and Corrales-Castillo trilogies), but this event would be nonstop carnage from start to finish. Judges would be instructed to deduct points for fighters that showed any semblance of self-preservation whatsoever. It would be just like in Rocky, where the champ threw all caution to the wind and spent his fights trading massive haymakers and body shots with the like of Apollo Creed and Ivan Drago. Do you know that Drago's punch was measured in Rocky IV at close to 2000 psi, which is close to the force of a close-range shotgun blast? And that's only the fifth or sixth most unbelievable thing in that movie! RAW-KEY, RAW-KEY, RAW-KEY

My sportswriting hero Bill Simmons is always looking for ways to improve the skills competitions at the NBA All-Star Weekend. Look no further. Each team can be made up of an NBA star, an MLB star from the same city, a WNBA star (I know, but let's face it, the NBA won't give up on this) and a celebrity. A team from Houston, for example, could consist of Yao Ming, Craig Biggio, Sheryl Swoopes and, oh let's say John Rhys-Davies. I know I'd watch that. Fun fact: Baseketball, the game, was actually invented by Airplane and Naked Gun director David Zucker years before the film was ever conceived.

A favourite of grade school playgrounds the world over, it was also used by Steven Seagal to humiliate and beat the crap out of noted character actor Mike Starr. Now, Seagal's version wasn't a pure example of BK, as he introduced the variation of both rapping Starr's knuckles and punching him in the face as well. It is this kind of advanced play that would be necessary to survive in the Professional Bloody Knuckles League (the PBKL, for short). The rapping of knuckles is just the first step in doing whatever you can quickly get away with against your opponent. Wow, On Deadly Ground both introduced a sport AND taught us about environmentalism. What a movie! Steven Seagal > Al Gore. It also showed us just how far Michael Caine would sink to get a paycheque. Classic Caine quote about his role in Jaws IV: "I haven't seen the film, but by all accounts it was terrible. However I have seen the house that it built, and it is terrific." I love Michael Caine.

I'm obviously referring to the James Caan version of the sport and not the uber-shitty Chris Klein remake. Fuck that noise. I still can't believe that movie got made. Some exec should've realized that they were remaking a Jimmy Caan movie with CHRIS KLEIN in the lead role. That's like baking a cake you enjoy and wanting to make another one, but deciding to use tar instead of flour. Roller Derby was actually a fairly popular sport in the 1970's, though it never caught on as anything more than a fad. The fact that Roller Derby was played in the 70's and not in a post-apocalyptic wasteland also made things somewhat less interesting. 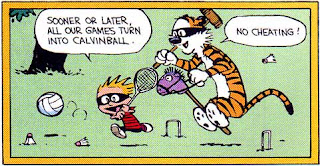 Ok, so Calvin & Hobbes never became a movie, but the appeal of a sport where the only rule is that it can never be played the same way twice is just too much to ignore. You wouldn't even need to be an athlete to play this sport. Someone like Robin Williams or Ryan Stiles would in all likelihood be the world champion. A game of Calvinball could very well encompass every other game on this list, making it the uber-choice.

I know three dozen people from Ivey alone who could compete at a world-class level.

Couldn't embed this one, but the footage is available at http://www.youtube.com/watch?v=d9TmQ-eDsKM

This is an easy sport, fun for the whole family, though some level of amateur and professional levels would have to be introduced. Imagine challenging Mikhail Baryshnikov to a walkoff. I'm not sure what your reasons would be for this challenge ("I thought your performance in Sex And The City was wooden at best, Mikhail!") but nonetheless, you would quickly find your ass handed to you. He'd throw in some ballet twirl that would make it impossible to duplicate. Pro Walkoffs would feature the acrobatic stuff, while Amateur Walkoffs would make zany creativity the focal point. I nominate Billy Zane as league commissioner, on the condition that he begins and ends each press conference with "It's a walkoff!"

By the way, this concept may be close to that of a dance-off, as seen in such films as You Got Served, but I chose to go with the Walkoff for a simple reason. Zoolander was great. You Got Served was not.

Quidditch is one of those wonderful inclusions into the Harry Potter universe that elevated the series from good to great. J.K. Rowling wanted a magical equivalent to soccer, so what she did do? Come up with something lame like 'magic cricket' where the balls are carried by actual crickets? Hell no. She cowboy'ed up and invented Quidditch, then expanded the game to a full set of rules, history and even made the Quidditch World Cup a main setting in the fourth book. Somewhere, somehow, the technology must be being developed to make this sport a reality. Apparently there are such things as 'Muggle Quidditch' leagues where people play with hoops and rackets and the Golden Snitch is an actual person in yellow who must be caught. Given the difficulty level of catching the Snitch in the books, the real-life Snitch would get an advantage depending on the venue. If the game is being played on grass, for example, the Snitch gets to ride a bike while the rest are on foot. If the game is being played on a field on a college campus, the Snitch can find somewhere to hide elsewhere on campus and it becomes a hugely elevated game of hide and seek while the rest of the Quidditch game is played on the field.


1. Hunting Fellow Human Beings For Sport (The Running Man, Battle Royale, Surviving The Game, The Condemned and probably many others)

The impetus for this list came when I was recently watching The Running Man with my pal Dave. Twenty years after it was made, The Running Man still stands as one of the all-time 1980's movies. It's cheesy, action-packed, filled with great corny Arnold lines and features a brawl between two future U.S. governors, Arnold and Jesse Ventura. But the film was really ahead of its time in many respects. It provided a pitch-perfect satire of both reality TV and pro sports, and it also provided one of the great casts in film history. The likes of Ventura, Toru Tanaka and Jim Brown as stalkers, and the all-time inspired choice of Richard Dawson as the venal show host. Though Arnold himself is surprisingly low-key --- his character comes off like more than a bit of a dick --- the rest of the film more than makes up for it.

But even given the horror of the situation that Arnold finds himself in, I turned to Dave halfway through the movie and said, "You know what? If this was an actual show, I would absolutely watch." Who wouldn't? There is something irresistibly primal about the concept of one chasing another with a life hanging in the balance. I can't believe some network hasn't tried some version of Running Man yet --- five bounty hunters try to chase down one contestant, who is allowed to try and hide out somewhere in, say, Pittsburgh. The contestant must stay in a hotel or flophouse at least one night per week, to give the hunters a fair shot and to prevent the contestant from, say, just hiding out under a bridge the whole time. As part of the pursuit, the contestant must complete various tasks in town and not just spend all of their time hiding. The hunters are given partial clues to what the tasks are, so they can't just go to the task points and lie in wait. The game would take creativity on the part of both the chasers and the chasee. The longer the contestant lasts, the more money they accrue. Now, of course, the hunters couldn't actually kill the contestants, unless the show was on Fox. The hunters could just be required to apprehend the players in some way, maybe by tearing a flag off their bodies or putting handcuffs on them, or something that would stop their forward movement in some way. The no-kill rule threatens to turn this into a really advanced game of tag, but hey, that would be still be pretty cool.
Posted by Question Mark at 1:17 AM