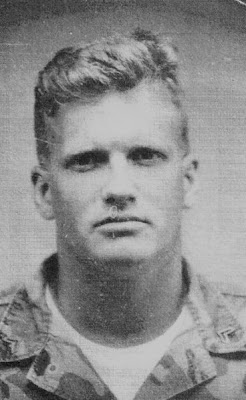 You might be wondering who this rough-looking customer is. Soldier #2 in a late-80's Dolph Lundgren vehicle? One of John McCain's old war buddies? I'll give you a hint...it's a well-known TV star. No, not John Ritter. He's just a skull by now.

Give up? Ok, it's DREW CAREY. That's right, thick-glasses, pot-bellied, bumbling Clevelander Drew Carey. Turns out he's a former Marine. All those years Drew could've just snapped Mimi's neck with his legs if she had gone one comment over the line.

This picture is the evidence I need that Carey's hosting gig on The Price Is Right will turn out alright. There's something to be said for initial instincts, and when I heard Drew Carey was the new host of The Price Is Right, my first reaction was "Hmm, that could work." This is an important step, since virtually nobody could've elicited an overtly positive response from me. I like Drew Carey. He seems like a good guy, and he has a combination of good humour and subtle bad-assery that Bob Barker mastered. You got the feeling that Bob was always a step away from laying the smack down on those contestants who took too long to answer questions. Who can forget that introduction to his violent side when he beat the hell out of Adam Sandler?

Carey is also helped, as anyone would've been, by the fact that he looks like the best choice in the world compared to Rosie O'Donnell. Not that Rosie isn't also a tough customer. If properly provoked (i.e. a contestant wears an 'I Heart Dick Cheney' t-shirt), she could raise hell. She is certainly a bad-ass. Also, she has a bad ass.

All of Monday was spent plowing through Harry Potter and the Deathly Hallows, and it was well worth it. SPOILER ALERT FOR THE REST OF THE POST, SO JUST STOP NOW. YOU HAVE BEEN WARNED. I'm fairly pleased by the happy ending. What would've been the point of Rowling going blood-thirsty and killing one of the big three? Why end the series on a bittersweet note? The only one of them whose death would've made sense was Harry, but even then, he got to have his much-deserved happy ending with Ginny. And probably more than just a happy ending, nudge nudge wink wink, given all of their children. Harry rode her like a Quidditch broom. One quibble...between all of Harry/Ginny and Hermione/Ron's kids, they didn't name any of them after Ron's dead brother Fred? Even worse, nobody said the line, "Fred's dead, baby. Fred's dead."

The book was basically like a Harry Potter greatest hits -- all of the living major characters made another appearance in at least a cameo form, every loose end I can think of was tied up and the horcrux search was resolved fairly well. The real dead spot was that 50-page or so section when Harry and Hermione are spinning their wheels in search of the horcruxes. That dragged something fierce. Ron left for really no reason, and I thought that it wasn't the real Ron who returned -- it was Voldemort in disguise or something, and he'd reveal himself in the last few pages. Also, Snape went out like a wimp. After all of that flashback stuff in Dumbledore's office and how his loyalty has been a major theme of the series, he gets offed by Voldemort's snake? And he and Harry don't even get a real final scene together? I can just imagine Alan Rickman's reaction when reading this book. "I don't even get a great death scene? By Grabthar's hammer!"

A tip if you ever get a mouse in your house: use peanut butter in the traps. We had a mouse a few months back, and he proved himself smart enough to get the cheese out of the trap without dying. On the bright side, creationism's case against evolution took another blow, but we were still stuck with a critter running around our vent. So my roommate, who grew up on a farm, got the bright idea of using the peanut butter. The result was one dead mouse. Sticks to the roof of your mouth, bitch.
Posted by Question Mark at 5:51 PM