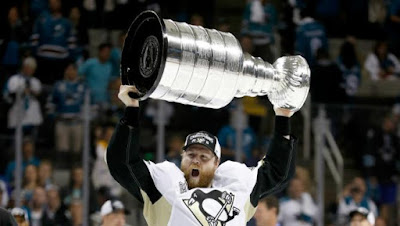 In my NHL season preview last October, I wrote "As a self-loathing Leafs fan, I really want Phil Kessel to absolutely light things up playing with Crosby and Malkin this season.  Like, I’m talking a 60-70 goal campaign.  It boggles my mind how thoroughly Kessel was railroaded out of town by Toronto’s media and (not yet proven to be competent) front office staff, when all the guy did was single-handedly carry the team to any manner of respectability for six years."  I also officially picked Tampa Bay over Anaheim in the finals, but "part of me is rooting for Pittsburgh just to see Kessel hoist the Cup and see the Toronto media’s collective head explode."

In my Stanley Cup predictions post from two months ago, I self-plagiarized thanks to my love of a head-exploding trope by writing "I also just think it would make a lot of Toronto heads explode if Phil Kessel somehow ended up winning a Stanley Cup.  That would be hilarious.  Kessel’s day with the Cup should just be him filling it with hot dogs and stuffing his face in front of every single hockey pundit in town."

And last night, cue the guy from Scanners, since Phil Kessel is a Stanley Cup champion.  And not just a champ, he had a legitimate case to be the Conn Smythe Trophy winner (though keep in mind the media votes on that award, so it would've taken a miracle for him to beat Crosby).  Now his name will be inscribed on the Stanley Cup forever, as well as on the replica that sits in the Hockey Hall of Fame's main hall, so many a sad-sack Leafs fan who cares more about "grit" and "old-time hockey" than actual talent can read it and grit their teeth.

I'm going to get a hot dog from a street vendor today in honour of Phil Kessel.

I'll also bust out my old "Shark Week" tag as a tribute to the Sharks, who at least choked in a later round this season!  You're slowly getting there, San Jose!
Posted by Question Mark at 2:59 AM