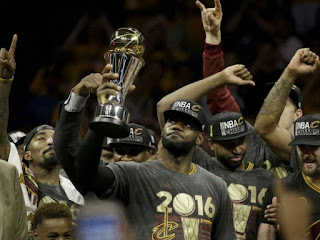 The Cleveland Cavaliers are a questionably-run franchise that compiled an oddball collection of NBA players, some very good, some very flawed, some both.  And it doesn’t matter, because they also have LeBron James, the human cheat code.  Every decision that the Cavs (or, really, LeBron himself, the pseudo-GM) is now instantly justified because the team won an NBA championship.  You can shake your head at how everything happened, but at the end of the day, the rings don’t lie.

I honestly didn’t think this would happen.  I thought the Warriors were simply too good, too deep and playing at too high a level to lose to anyone.  If they did lose, it would be to the Spurs Borg or to the Thunder if Durant and Westbrook were both firing on all cylinders (which almost happened).  It certainly wouldn’t be to the Cavaliers, whose reliance on one guy made them essentially the antithesis of the Warriors’ hydra style.

I underestimated the one guy.  After this series, you can absolutely go ahead and make a case for LeBron as the best basketball player of all time.  Obviously he’d already more than proven himself as *one* of the true elites long before the 2016 Finals but now I’m ready to seriously discuss him alongside Michael Jordan.  You could argue that MJ never would’ve gotten himself into such dire straits as being down 1-3 in a series, though the fact that James more or less single-handedly led the Cavaliers back out of that impossible hole is unprecedented in NBA history.

It’s only fair to also note that Kyrie Irving made a huge showing for himself in the Finals, not to mention several other guys rising up (like old man Richard Jefferson having the series of his life, then immediately retiring after getting his long-awaited ring).  It’s also only fair to note that despite being banged-up as all hell, the Warriors still win this series if Draymond Green doesn’t get himself suspended for Game Five.  That one will be the asterisk on Green’s career, not on the Cavaliers’ championship.

What a way for Cleveland to shake off its incredibly long sports championship drought.  The Cavs have a title, Cleveland has a title, and everything LeBron set out to do when he made his return to his home state has come true.

Hail to the King, baby.
Posted by Question Mark at 3:06 AM