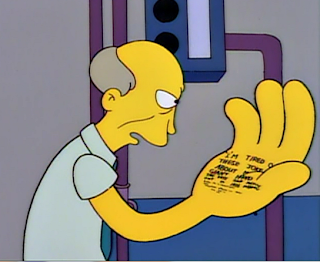 I keep trying to make "gesundteit" happen for coughing, but nobody's buying it.  I just get a lot of funny looks.  Shouldn't there be some kind of post-cough word that we as a society should all agree on?  Better a word than a laboured pun, like "dude, that cough sounded ra-ough."  Nobody needs to see that done to the word 'rough.'

The idea for a modern adaptation of "The Secret Life Of Walter Mitty" has been bouncing around Hollywood for literally decades, and I guess Ben Stiller was the guy left holding the hot potato when the music finally stopped.  So that's fine --- Stiller has a pretty even ratio of good movies to bad, with a higher batting average as a director (Tropic Thunder, Zoolander, Reality Bites, Cable Guy), so in all likelihood, this long-gestating Mitty project was probably going to be pretty decent.

Then the trailer dropped and oh my stars, suddenly this one shot to near the top of my must-see list.  I daresay it's the most a trailer has ever quelled my doubts about a film's viability since The Social Network's immortal choir version of 'Creep' trailer.  As insane as this sounds, could we follow up a Ben Affleck-directed Best Picture Oscar winner with a Ben Stiller-directed Oscar winner?  Jack Black should direct a movie and we can just pencil that in for 2014.

Question: does Garbage Island have a king?  If not, can I claim it for myself right here and now?  I think I'd make a pretty solid monarch.  There isn't much history of kings named Mark, aside from this guy, who's ruining it for the rest of us.

So basically I need to both reclaim my name and bring some honour to Garbage Island, since really, "Garbage Island" isn't going to bring in the tourists due to the name alone.  (We could get Shirley Manson and company to record a national anthem, but even that can only go far since this isn't 1999.)  I propose we re-name the area Plasticland, sort of a natural sister country to Iceland and Greenland, and yes, I realize Greenland isn't an actual country but how dare you question the wisdom of King Mark Of Plasticia?  I will see your head hung from the tallest spike on the wall surrounding the capital city, Polystyreneville.

Since I already posted the supercut of movie references from the Simpsons' first five seasons, it's only fitting I post the Seasons 6-10 supercut as well.  I wonder if the videomakers will keep it going or if they, like so many others, will just pretend the Simpsons ended 13 years ago.

I can't drive around Toronto these days without thinking of U2's "Last Night On Earth" video, which had a basic idea that humanity would finally meet its end when everyone on the planet is simultaneously stuck in one giant traffic jam.  Toronto is apparently trying to make this dream a reality by running major and minor construction projects on literally half of downtown, limiting or blocking off entirely both minor side streets and major intersections.

Just last weekend, the city decided it would be a good time to shut down the corner of King and Spadina at the same time as the TTC's downtown subway line was closed for repairs, not to mention completely blocking off both Queen and Richmond streets due to the how-is-this-taking-so-long construction project on York Street.  Combine these with blocking off large parts of the CNE due to it going into carnival mode, the never-ending rebuild of Front Street around Union Station and a couple of Gardiner on-ramps being closed off and you had TRAFFIC CHAOS.  As I noted earlier, it seemed even the side streets had something going on, even if it was something as minor as a pylon and an open manhole that still held up traffic trying to use a shortcut since the main roads were fubar'ed.

I'm no construction expert and I'm sure there are certainly union rules and/or city expense laws governing this, but why not have construction going 24/7 so the majority of work can be done at night when nobody's on the roads?  Split a job up between three crews that work around the clock and something like the York Street project could theoretically be done in half (or a third) of the time.  Sure, it costs more to pay extra workers, but you're a) creating jobs and b) saving drivers, cyclists and TTC commuters a ton of extra stress.

I plan to make this idea a platform of my upcoming mayoral campaign, though the other guy's platform of blaming the Toronto Star and yelling GRAVY TRAIN over and over will be hard to top.
Posted by Question Mark at 12:50 PM