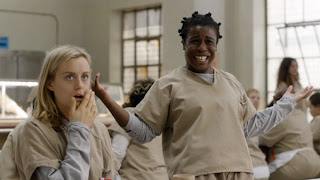 "Orange Is The New Black" is not a particularly good title.  It's a mouthful, it's hard to shorten and it's somewhat misleading since "____ is the new black" is a strictly a fashionista/trend-setter kind of phrase, and Piper Chapman's character doesn't fit that bill.  This isn't Elle Woods being sent to prison.  Plus, it will inevitably lead to lazy sports headlines whenever an orange-uniformed team (i.e. the Philadelphia Flyers, Cincinnati Bengals, Denver Broncos, etc.) goes on a roll over the next few months.

So yeah, it's a rough title.  Everything else is basically perfect.  OITNB* is the latest Netflix original series, and one that has caught on as a hit this summer despite the awkwardness of the Netflix release model (more on this later).  It might've actually helped that there was little, if any, buzz about the show leading up to the release, and what buzz there was sounded goofy.  On paper it's a 'comedy' about a yuppie being sentenced to prison that stars Captain Janeway, the American Pie guy and Donna from That 70's Show.  What it actually is is an affecting drama (with some light-hearted moments/plotlines) and, kind of surprisingly, one of the year's better shows.

* = even the acronym is awkward

I always thought that one of the reasons "Lost" took off so wonderfully is that the structure of an episode with real-time action and a character-centric flashback was a great way of handling an ensemble cast, and OITNB sort of does the same thing.  Each prisoner gets her "own" episode where we get a glimpse into her past, and while the flashbacks usually aren't as big a chunk of an episode as they are on "Lost," sometimes even a brief look is all we need (plus Piper usually gets at least one flashback scene of her own per episode).  The OITNB cast is also so large that we still have several major supporting characters that we haven't explored yet --- I can't wait for the one where we finally get to meet Morello's fiancee,* or the sure-to-be-crazy-pardon-the-pun Suzanne episode.  I don't even mind the constant Piper flashbacks since she's a great central character in his own right, so we're nowhere near the Jack-on-Lost fatigue with her flashbacks.

* = my working theory was that "Christopher" was actually a figment of Morello's imagination, but apparently he has come to the prison before, just not since her first three weeks of incarceration.  Since a lot of the flashbacks detail how these hard-bitten criminals are often victims of circumstance, I thought it'd be cool if one of the "nicer" characters was actually revealed as a dangerous maniac in their flashbacks and Lorna is as good a candidate as any.  Also, get this, Yael Stone is Australian.  I kind of figured that (unless Rosie Perez and Jennifer Tilly somehow had a baby) Stone was putting on a fake voice for the role but man, talk about a shift in dialect.

So, the cast.  It's essentially all no-names and "hey, it's that woman" actresses who combine for one of the strongest overall casts to come down the road in a while.  This is a star-making performance for Taylor Schilling as Piper, who's not at all an easy character to capture.  The aforementioned known actors in the cast are all terrific in twisting their established acting personas --- Kate Mulgrew is just having a ball as the hard-nosed Russian prison cook who runs the kitchen and "captains" her charges, Jason Biggs plays his usual "schmuck in a tough situation with a girl" character but obviously the stakes are higher here, and Laura Prepon overlays Donna's "I'm too cool and smart for this" attitude and onto her character of Alex and slowly chips away at it.  And holy lord, do she and Schilling ever have chemistry.

These are just the 'main' characters but, as mentioned, the show's format allows the entire cast to step up and steal scenes or even entire episodes.  Many of the female prisoners are relative unknowns from the New York theatre scene so they're not carrying any past-role baggage into their characters.  Yael Stone IS Morello, or Laverne Cox IS Sophia, Taryn Manning IS Pensatucky, etc.  OITNB is definitely going to be the new Wire or Deadwood* in the sense that I'm never going to be able to see any of these women in future projects without immediately just relating to them as their old characters.

* = though, ironically, Michael Harney actually was on Deadwood and I didn't recognize him until I looked up OITNB on the internet.  Damn you, visage-obscuring 1870's facial hair.

I can't talk about OITNB without talking about Netflix itself since it's the site's latest original series and arguably its biggest hit since it has caught on organically.  "House Of Cards" had the big names and "Arrested Development" was a continuation of an old cult favourite, but OITNB just burst onto the scene almost out of nowhere.  It's another instance where I can't tell if Netflix's model of releasing an entire season at once hurts or helps a show build an audience.  On the one hand, you can dive into it all at once.  On the other, it hurts some of the "hey, are you watching this?  It's awesome" week-to-week word of mouth that has carried so many other great shows to prominence.

Even if Netflix released one episode every two or three days, that would give audiences a little time to digest and discuss it online, i.e. our generation's version of the water-cooler chat.  As it stands, I'm caught up on OITNB now but I think the general buzz of the show maybe wore off a couple of weeks ago…though then again, folks are still discovering it.  And I can't talk about it with them yet since everyone seems to be only a few episodes in, argh!  Okay, so really, this is just a TV nerd complaining that he can't share his opinions with others.  Good thing I have a blog.

So yeah, watch this show.  And good luck trying to get the theme song out of your head --- by this point I'm basically hearing Regina Spektor's "You've Got Time" in my dreams.
Posted by Question Mark at 3:08 AM