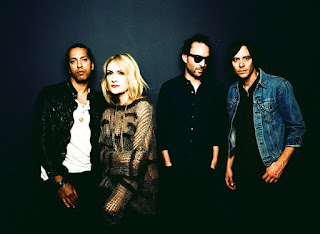 Following in the footsteps of the Yeah Yeah Yeahs in 2009 and Talking Heads in 2007, Metric became this year's established band who I 'discovered,' really enjoyed their music and jumped on the bandwagon.  Of course, I did this literally just a couple of weeks after Metric had played concerts in both London and Toronto, so I'll have to wait until their next tour to properly christen my fandom with a live show.  Not that this is a deal breaker…it's not like I'm holding my breath to see Talking Heads live, for instance.

So yeah, Metric.  They've always been a band that's been around for me, as in I knew of them and some of their bigger songs, yet it took me until last month to actually purchase one of their records.  "Live It Out" had a few good tracks but overall didn't really grasp my attention, and yet just when it seemed as if my fandom would die on the vine, I listened to "Synthetica" (their latest disc) and that was that.  It's arguably my favourite album of 2012, which admittedly sounds more impressive than it really is, given that I listened to maybe six new records in their entirety this year and generally am very late to the party on new music.  Stay tuned to my blog in 2016 when I wax rhapsodic about, like, A$AP Rocky or someone.

Now having listened to four of Metric's five studio recordings, perhaps what intrigues me most about the band is that they seem to be getting better.  "Old World Underground, Where Are You Now?" was very raw and seemed almost a work in progress besides the singles; "Live It Out" was more polished but much of the same thing; "Fantasies" was a big step forward and good from start to finish, plus it may be this generation's "Fully Completely" in that I swear two-thirds of the songs are already staples of Canadian rock radio; finally, "Synthetica" takes the next leap and is a legit great album.  Besides missing the tour, the only downside of becoming a Metric fan at this specific moment in time is that it'll be another two years before I can enjoy a new disc.  Oh well, it's not like I don't have any experience in waiting excruciatingly long for my favourite bands to release new music.  Sigh.

Obligatory "Emily Haines is very attractive" statement.  Also, is it just me, or does Haines look a lot like the actress who played Harry Anderson's wife on the old Dave's World sitcom in the early 1990's?  On second thought, including "is it just me" in that sentence is very redundant.

Perhaps the question is why didn't I become a Metric fan sooner, since back in my college radio days, "Dead Disco" was a staple of the legendary (?), mega-popular (??), widely listened-to (?!?!) morning show I used to host with my buddy Dave.  You see, we had to play a certain number of songs by Canadian artists due to Cancon regulations, so as I recall, we just randomly picked OWUWAYN (then a new disc) off the rack and picked the first title that struck our fancy.  The weird thing is, Dave hated the song --- he just thought it was a funny gimmick that we kept playing a song that we hated every week, and thus could openly trash on the air.  I actually liked the song but played along with the bit for comedy's sake.  So in hindsight, perhaps it was Dave's peer pressure that cost me years of enjoyment of Metric's music.  Go to hell, Dave.

New Year's Resolution to get through 2012 without ending a post by telling a friend to go to hell: failed.
Posted by Question Mark at 2:06 PM