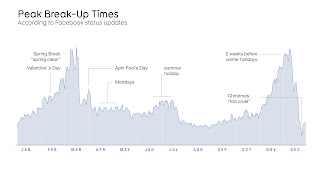 According to the ultra-scientific method of counting Facebook status updates*, more breakups occur today (December 10) than on any other day of the year.  In fact, this entire first half of December seems to be the peak time for breakups over the entire year.  If your significant other sends you a 'we need to talk' text message, it would behoove you to just ignore it until you get into the safe zone known as the week before Christmas.

* = and maybe not even that, given how I'm only finding this out via a picture posted up by a friend of mine on, you guessed it, Facebook.  After all, who's the poor schmuck who is actually reading everyone's statuses to calculate this?  (My guess: a bitter Eduardo Saverin.)  So what I'm saying is, this could all be entirely false and I'm just actively spreading misinformation here.  Deal with it.

Even if this is all nonsense, however, the graphs seem to adhere to common sense.  There's a big spike around Valentine's Day (as couples surrounded by images of love realize that they themselves are not actually in love) and then in the spring, when a number of factors combine to ruin relationships...

* The end-of-semester crunch for college students plus upcoming exams, i.e. "I'm going to be doing nothing but studying for the next six weeks and then it'll be summer, so let's just break up now."

* The Day Of Days, i.e. "So many beautiful people around, why bother limiting myself?"

* Actual spring break, i.e. "My significant other isn't coming to Cabo/Daytona Beach/Cancun/etc. with the rest of us and I want to get laid, so let's break up," OR "My significant other is going to Cabo/Daytona Beach/Cancun/etc. while I'm stuck here, so let's break up because they're obviously going to cheat on me, and I'd prefer to lay someone else here."

* "Spring Cleaning," as the graphic puts it.  So basically a combination of all of these things, plus maybe just a sense of renewal after one spends a day cleaning the junk out of one's house, i.e. "Hey partner, you're human garbage, I'm putting this relationship out by the curb."

It's also not hard to see why December has the consistently bigger spike.  The end-of-semester exams are again a factor, plus the "I want to get laid during the holidays and my significant other isn't around, so I want to be single" reason still applies.  But Christmas is absolutely the big motivating factor in December for two main reasons.

Firstly, it's that time of year when everyone spends time with their family and loved ones, so if you're in a relationship with someone that you're on the fence about, the Xmas season can be a real eye-opener to make you realize that they're not an actual capital-L, capital-O Loved One.  Let's not ignore the role that bringing a significant other home to meet the family plays in many a breakup; how many couples have split because someone feels they're "not ready" to have their partner over for Christmas, while the other is, "are you fucking kidding me?  We've been dating for four years and we have two kids, I think we're ready."  (Ok, maybe a bit of dramatic license here, but you get the picture.)

Secondly, Pearl Harbor.  "The anniversary of this grim attack really makes me think about things that are special to….WE'RE BREAKING UP!  BOOM!  GOTCHA!  You never saw it coming, just like at Pearl Harbor!"

Ok, not really.  The actual secondly, finances.  A friend of mine who shall remain nameless (since his now-wife is a FB friend and may read this) used to always plot to remain single from December-February as a way of saving on Christmas and Valentine's Day presents.  Just to add to the white trashiness, on two different occasions, this guy broke up with a girlfriend in late November/early December and then got back together with her once V-Day had passed, so he could continue the relationship but save himself a few bucks in the process.  I think we all knew he really loved his future wife when he actually stayed in the relationship through December-February.  It's kind of sweet, in a douchey way..."Hey baby, I love you so much that I won't contrive a breakup and will actually get you something during the two major gift-giving holidays."  Hallmark, take note, you just found your new line of cards.
Posted by Question Mark at 5:39 PM