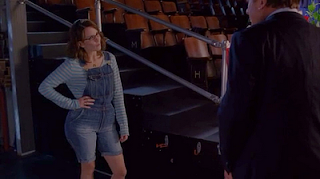 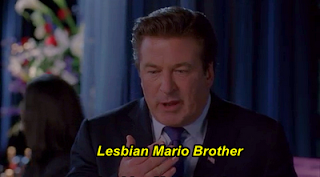 If you're a fan of Community, Parks & Recreation, Friday Night Lights, Undeclared, Arrested Development or any other critically-acclaimed TV show past or present that's struggled in the ratings, you tend to go beyond just being a fan to taking on an active interest in the show's success.  A few extra Nielsen points are celebrated as much, if not moreso, than a quality episode since those extra ratings will get your show one step closer to staying on the air.  You're not just enjoying a show anymore, you're rooting for a loveable underdog.

30 Rock has never seemed like an underdog.  Despite the fact that it's had as meagre ratings as anyone (what an odd bragging point) over its six seasons, the fact is that 30 Rock has always seemed like a bedrock show for NBC due to the pedigree of people like Tina Fey, Alec Baldwin and the dozens of big-name guest stars involved with it.  30 Rock has also received a number of major Emmy awards, which undoubtedly helped keep it on the air as a so-called 'prestige show' for NBC.  In short, it's a lot harder to type 30 Rock as the little engine that could, when those other shows I mentioned received relatively little Emmy attention and whose casts and creators had much lesser Q-ratings than the likes of Fey or Baldwin.

It was easy to jump on the bandwagon for, say, Undeclared since you could enjoy it as just a show populated by unknowns, whereas with 30 Rock, you probably weren't going to watch unless you already had a liking for the people involved.  My friend Mario, to this day, hasn't watched an episode of the program simply because he hates Tina Fey for "ruining" SNL during her last few years as head writer*, so he wasn't going to bother with her show.

* = While I have openly criticized the fact that SNL was largely terrible from 2003-05, I can forgive Fey since a) I'm a huge Fey fan and/or apologist and b) she was both writing Mean Girls and developing 30 Rock on the side, and since they ended up being great, I can forgive a couple of weak-ass SNL seasons.  I'll just exonerate Fey and presume that all those SNL sketches would've been great had Jimmy Fallon and Horatio Sanz not kept breaking.  It was all their fault!

So essentially, in a weird way, 30 Rock actually became an underdog simply because it wasn't a darling of Nielsen viewers nor was it overly a darling of internet fans (not because it wasn't good, but because there were simply hipper, younger-skewing shows that soaked up all the attention).  It also became an underdog in the sense that it's arguably the funniest show of the post-Arrested Development era and yet it already seems like it's been overlooked in favour of your Communitys, your P&Rs, your How I Met Your Mothers or, for the particularly easy-to-please, your Big Bang Theorys.

This is one big long preamble to get around the fact that 30 Rock was very possibly the funniest show on television this particular season, quite a mean feat considering this was its sixth season on the air.  Just last December I was all but ready to hand the Funny crown to It's Always Sunny In Philadelphia, but then 30 Rock came out of the box with arguably its best season yet, and 30 Rock's 22 funny episodes beats IASIP's  13 funny episodes (and, not to be overlooked, Archer's 13 funny episodes).  Sorry, math.

After three phenomenal years, 30 Rock dipped a bit in its fourth and fifth seasons and I too believed the show was running out of gas.  It was still funny but not top-drawer funny.  It lacked Community's sheer creativity, Parks & Rec's polish, the Office's ongoing ohmigod-I-just-can't-look away trainwreck of recent seasons or It's Always Sunny's gleeful nihilism. 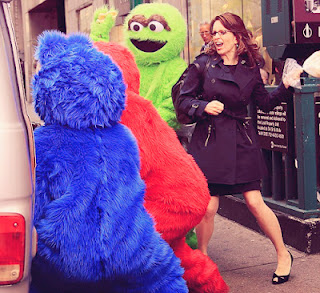 For the sixth season, however, 30 Rock rebounded to its classic levels and I'm not completely sure why.  While I enjoy the Liz Lemon/Criss relationship and having Liz in an actual sane relationship is a relative game-changer, it wasn't a driving force behind the season's story.  Jack's corporate machinations were still funny and removing Elizabeth Banks from the mix wasn't a net loss or net gain.  Tracy Jordan was still insane.  Jenna was still insane, albeit now with Will Forte as her cross-dressing huswife.  Kenneth left the page program for an amusing subplot as an NBC standards & practices guy, but by season's end had been busted down to janitor and was basically back in his old role.  Kristen Schaal joined the cast and did Kristen Schaal things.

It was no shakeup to the formula, just better ingredients.  The jokes were sharper, the plots tighter, and everything just seemed about 30 percent funnier than it did in the previous season.  On the one hand, it gives some pause that they might not be able to keep the momentum going into their final season next year.  On the other hand, who am I to doubt this show's ability to end things on a high note?  Once 30 Rock does wrap up, expect a lot of retrospective "oh yeah, this show was actually really awesome" type of articles, which may or may not be buried under the inevitable mountain of criticisms about Community's fourth season.  How Liz Lemon.

It kills me that Blogger doesn't allow animated GIFs so I couldn't directly include Liz Lemon's make-it-rain dance.