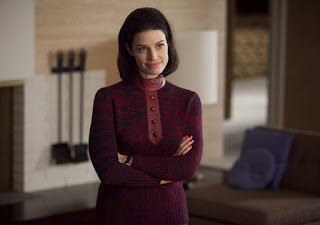 I originally wrote this as part of an "Other People's Writing" post that I'll get to tomorrow, but this section just kept expanding to the extent that I just made it a stand-alone.  It all stemmed from Andy Greenwald's Grantland article about how Megan Draper is an alien set to conquer the Mad Men universe.  I'm saving my overall 'TV year in review' post until Mad Men's season wraps up but just as a little preview…holy crap, Megan Draper.  It's hard to say she's necessarily elevated the show since Mad Men has always been pretty great, but Megan's addition has definitely taken the show into a different dimension.  (Hey, Greenwald's laboured alien metaphor DOES fit!)

Megan has basically turned Mad Men into a horror movie.  She's the lovely, innocent would-be victim that you just want to encourage to run away from the asylum of self-loathing that is Sterling Cooper Draper Pryce.  It's usually difficult to integrate a new character into an established show since the other characters are already so well-formed and well-known to us, but Megan's freshness stands in such stark contrast to the darkness of every non-Cosgrove on the show that the LAST thing you'd want is for her to be integrated.  Mad Men has built such a feeling of impending dread over its five seasons and, with some of the events of latter episodes, it seems like the roof is starting to cave in and you're left hoping that Megan, Peggy, Ken, Joan and I guess Sally can just dodge the wreckage.

"Lovely Megan, I went to buy a light bulb. When I get back, I'll see you better. Love, Don."

Don's elegant-as-hell love note misses the point that Megan herself is the light bulb, illuminating the fact that Don Draper, Hero Of The Show is a horrible human being.  It's been easy to overlook this fact over the previous four seasons since Draper is so charismatic, usually pitted against someone even more loathsome (Pete, Betty, the British guys who bought Sterling Cooper, Lee Garner Jr., etc.), is able to deliver a great ad pitch or a charming love note, and so likeable in his Dick Whitman moments, but yeah, Draper is a five-star piece of garbage.  This isn't exactly new news, but Megan's presence lays this bare in every episode.  Greenwald takes the argument that this season has illustrated that Don is suddenly no longer as cool because he seems older and is no longer in-touch with the changing 60's culture --- I think this season has simply thrown light on how Don has never been cool, he's just been packaged that way.  There's a whole sub-culture of Mad Men fandom that loves the show because of its retro-chic, which I have to believe the creators subversively love since it proves their larger points about how advertising can put an attractive gloss over anything.  We were wondering before this season how the sudden twist of Megan and Don being married in the S4 finale would impact the show in S5, yet rather than be an unwelcome intrusion, our reaction to Megan has just been, "Stay away from that awful man!"

While Megan is the new element to the formula this season, this season has had so many levels to it that Megan is just one piece of the puzzle, so I'll leave the rest to my TV year in review.  And now, let's hope everything I've written isn't negated by the season finale!
Posted by Question Mark at 11:38 AM