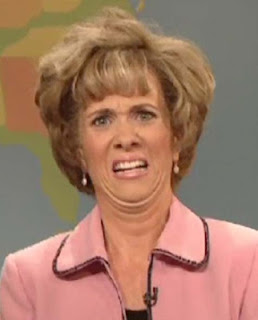 Some Saturday Night Live stars are an acquired taste.  I wasn't impressed by Chevy Chase as a Weekend Update anchor.  Dana Carvey always mugged way too much for my liking and far too many of his recurring characters were irritating as hell (more on this in a moment).  A lot of Adam Sandler's SNL stuff was just flat-out stupid.  I seem to be the only person on earth who didn't like Amy Poehler on SNL.

And then there's Kristen Wiig.  The weird thing is, whereas those other folks are almost universally-regarded as SNL legends, I'm far from alone in not being a particularly big Kristen Wiig fan.  The general consensus amongst fans is that she probably could've/should've left at least two seasons ago before everyone became completely sick to death of "her."

I use the quote marks since, like Carvey, Wiig was a victim of her recurring characters.  As just a general sketch performer, Wiig was very good to borderline great in basically everything.  One-off Weekend Update correspondents, impressions (Bjork!), straight-woman roles, or just variations on her 'increasingly unhinged' stage persona, Wiig could do it with ease.  But holy god, look at this fucking motley crew --- Gilly, Dooneese the tiny-armed performer on the Lawrence Welk Show, Target Lady, Shanna the sexy/disgusting woman, Aunt Linda the movie critic, the Broadway star on Secret Word, Garth & Kat, the woman who's always overexcited about a surprise party.  The list goes on and on.

(Three exceptions: Judy "justkiddingjustkidding" Grimes always also a one-joke character but it always made me laugh….same with Penelope the "oh, yeah, well I did this" topper….and the Two A-Holes sketch with Jason Sudeikis was legitimately really funny and different each time, except they retired those characters about three years ago and kept all of Wiig's lesser ones.  Poor choice.)

Nothing is worse than the feeling of seeing a bad character-centric skit and realizing, "Oh fuck, this going to be recurring and we'll see it 10 more times."  As ever with recurring SNL sketches, the trick is to add variations with each instalment.  With more or less all of Wiig's regular characters, it was 95% the same thing every time.  I don't know if that's her fault or the writers' fault for being lazy, but still, throw a curveball into the mix at least once.  The other issue is at least one of these characters showed up in every episode since Wiig has been pushed as the star of the show for around the last five years, so there was no respite.

So yeah, that's my beef with Kristen Wiig's SNL tenure.  Again I reiterate, in general I enjoyed her time on the show and outside of SNL, I actually really like her --- Bridesmaids was amazing and Wiig has knocked out a number of very good little roles in a number of  good films like Adventureland, Knocked Up, and Friends With Kids.  Hell, I even liked her pre-SNL, back when she was just "Dr. Pat" on the sadly forgotten but brilliant Joe Schmoe Show.

With that out of the way, I have WAY MORE BEEFS with the odd deification of Wiig (and others) within the show itself.  I think it began when Lorne Michaels referred to her as a "top-three all-time" cast member in an interview last year, a quote that nearly made me fall out of my chair in a Comic Book Guy-esque sputter of incredulity.  Top THREE?  EVER?  Let me again state that I like Wiig but come on Lorne, what the hell?  Part of me hopes that Michaels was just playing the hype game given that Bridesmaids was so huge since man, Wiig as an all-timer isn't even close to being accurate.  "Ranked list of all-time SNL cast members" is one of the items on my blog's to-do list, so I'll save my full rant for that post, but of all the incredible talents in the show's history, Lorne seriously thinks that Wiig is better than all but maybe two of them?!  Wiig hasn't even been the funniest person in her own casts --- I'd put Forte and Sudeikis ahead of her, and you could probably talk me into Bill Hader too.

If you saw the episode last weekend, Wiig got a big and rare "sendoff" sketch marking her last show.  Usually when notable SNL cast members leave, they get a couple of their recurring sketches for their final show and that's that.  With Wiig, they had her dancing with the entire cast and even Lorne Michaels to celebrate her so-called graduation while none other than Mick Jagger serenaded her with "She's A Rainbow."  It was baffling just how far over the top it went.  It's even odder when you consider that apparently Sudeikis and Andy Samberg are also leaving the show before next season.  Samberg got two nice goodbyes in the form of the final two SNL Digital Short sketches* but Sudeikis got jack.  Maybe it just means he isn't leaving the cast, since it makes sense that he would stick around to play Mitt Romney through the election or (oh god no) beyond if Romney (oh god no) becomes president.

* = If SNL is handing out big goodbye ceremonies, where was Samberg's?  While he was only an okay sketch performer, you can make a case that Samberg is one of the 10 most important cast members in SNL history.  The Digital Shorts have been the most consistently funny part of the show for seven years and certainly the hippest regular sketch in terms of making SNL relevant in the age of viral video.  Yes, I realize that there's nothing less hip than using the word 'hip.'  Deal with it.  Hey, look at how I cleverly incorporated that meme, I'm so hip!

Now, I realize that criticizing SNL for giving a beloved cast member a big sendoff is pretty picky, given that the easy rejoinder is, "Hey Mark, maybe they just wanted to do something special since Kristen Wiig is the apparently phenomenal to work with and is the nicest person in the world."  Fair enough.  Poehler, Jimmy Fallon and Maya Rudolph are also legendarily nice folks, and their hosting gigs from the past two seasons featured a number of cameos from their old co-stars and were basically a celebration of their time on the show.

The problem is, however, that their time on the show (roughly 2000-07) wasn't very good.  Things turned downhill after Will Ferrell left the cast, bottoming out in the 2004-05 season (one of SNL's three worst ever) and the barely-better 2005-06 season.  As I stated earlier, I hated Poehler on SNL.  Rudolph was a bit better, though she and Poehler shared the same trait of irritating characters and mannerisms.  Fallon is either the most overrated cast member in history or one of the bigger wastes of talent in SNL history, I can't decide which.  If SNL wants to celebrate these individuals, that's fine, and frankly it's very cool that most of that cast are genuine friends who will help each other out at the drop of a hat.  Just don't constantly put their cast reunions on my TV screen and try to whitewash history by claiming that those seasons were great.  Trust me, they weren't.  When Robert Downey Jr. hosted, for instance, you suddenly didn't see Anthony Michael Hall and Randy Quaid drop by for cameos as the episode became a tribute to the 85-86 season.

I extend this same feeling to Wiig's sendoff.  If you want to take a moment to celebrate Kristen Wiig the person, sure, go for it.  If you devote a whole segment to giving her an elaborate goodbye that seemingly elevates her as the best cast member ever, that's not fine, since that's simply not true.  Few, if any, shows on television possess the rich history of Saturday Night Live but it seems like SNL itself doesn't fully appreciate that history beyond the last decade or so.  It's like an old rock star who made a bunch of legendary albums in the past but insists that his newest record is his best work, as his fans just roll their eyes and indulge the new songs while waiting for hear the hits in the encore.

With a nod to Mick Jagger, Wiig is literally like "She's A Rainbow" --- a very good Stones track, but if Mick & Keith told everyone it was their best song and played it at every concert, you'd think they were going overboard.  You might even start to consciously dislike the song since the band was pushing it down your throats to this extent.  I like Kristen Wiig, SNL, but just 'like,' not love.  It's only Kristen Wiig but I like her, to paraphrase Jagger again.  SNL, don't give me reason to look back on her tenure with Aunt Linda-esque eye-rolling rather than good memories.
Posted by Question Mark at 12:46 PM