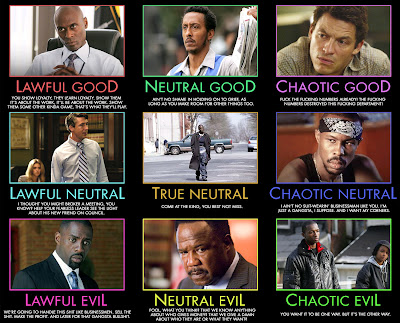 I don't know about you, but my biggest takeaway from Bill Simmons' interview with Barack Obama was the throwaway mention of Omar as the #1 seed for a hypothetical tournament of Wire characters. What an idea! After about 10 minutes of thinking and minor research (i.e. finding characters' last names), here's what I've come up with.

* There is some obvious crossover between categories, but given how half the people on this show could fit into a 'crime' bracket, I wanted to keep things somewhat separated. 'Crime' is really essentially just the Barksdale and Stanfield crime families, plus a few major wild cards.

* To that end, Kenard (though a trainee-entry dealer) goes into the 'streets' bracket. Yes, this may have been in part because I intentionally wanted an Omar vs. Kenard matchup of irony in the first round.

* You could have a good argument about who was the biggest character not included in the tournament. Maybe one of the minor cops, like Holley or Norris? Principal Donnelly? One of the straw man editors at the Baltimore Sun? Brianna Barksdale? Sergei, the Greek's goon? Horseface Pakusa just because his name is Horseface Pakusa? Maybe I should've included play-in games for the #16 seeds.

* The odds that I'm an idiot and have forgotten someone REALLY obvious are 5-1. For instance, in my first draft, I somehow forgot Snoop, Chris AND D'Angelo Barksdale.

* The crime bracket is absurdly strong.

* The only obvious call is Omar coming out of the Streets bracket just because he's Omar and is the favourite to win the whole thing. Besides that, however, you can make arguments for at least 4-5 different characters out of every other bracket, which is a testament to The Wire's depth.

* For the real March Madness, "You come at the king, you best not miss" should be the theme of every #1 vs. #16 game, with that scene shown going into and coming out of every commercial break. Once I'm president of CBS, this will be my first order of business.
Posted by Question Mark at 12:48 PM