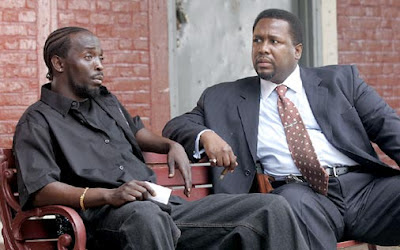 We're almost at the end of March, and thus it's time to conclude this month-long Wire March Madness tournament. It's been quite a ride. I thought about having the final on April 1 and then naming wild card entrant No-Heart Anthony as the surprise winner for April Fool's Day, but then I realized that joke is only as amusing as the time it took you to finish that sentence. So, we're taking care of the entire Final Four right here, right now.

In a weird alternate reality, can't you see these two being friends? Stringer and Frank shared similar views about hard work, discipline and at the end of the day, just wanted to better themselves. Needless to say, adding Stringer to the mix would've improved Frank's operation a hundredfold, and if Frank had joined the Barksdale gang….uh, well, I'm not sure what he would've added. Maybe Avon needed something heavy lifted by a forklift.

It's kind of ironic that Frank won the Institutions Bracket given that he was eventually killed because his attempt at going beyond his being a stevedore into crime got way out of hand. Conversely, Stringer's grab at "institutional" power and becoming a legitimate businessman backfired and he ended up dragged back to, and crushed by, the criminal world.

Two fantastic characters, two iconic performances and only one winner. To be honest, I didn't think for a second about taking Frank over Stringer. Could be another victim of the "more episodes, larger story" theory, as Frank's arc was completed over one season while Stringer's (similar) fall took a full three years to fully develop. As much as I love Frank Sobotka, I simply can't justify putting him over one of The Wire's signature characters. The bell has tolled for Frank Sobotka.

I mentioned during my last entry that Omar's only "mistake" during the series was falling into the ambush at the apartment set by Marlo's crew. While it's true that Omar's subsequent busted ankle was a key factor in his demise, that wasn't his mistake. Omar's entire criminal lifestyle was the mistake, as brilliantly pointed out by the Bunk in what I would call the single greatest scene in the show's history.

In two minutes, Bunk essentially destroys the Omar mystique. Bunk isn't totally on point with the details in this scene (Tosha is more than an innocent victim, as Omar knows) but he nails Omar dead to rights. As great a character as Omar is and as heroic as he seems in comparison to the Barksdales and the Stanfields of the world, Omar is still contributing to the culture of violence in Baltimore. In a way, I felt this scene was almost David Simon's comment on how the show's fans themselves shouldn't glorify Omar, who is arguably as terrifying as Avon or Marlo simply because Omar isn't seen as "bad" within the Wireverse.

And, the coup de grace, the brilliant "kids acting like Omar" line that ends up all coming together two seasons later since Kenard was one of those kids. Omar's mystique is what eventually kills him.

I've been comparing Omar to Batman throughout this entire tournament, with perhaps Omar's death being the key factor. I read an essay or article once years ago that discussed what would be the most fitting end for Batman, if DC Comics decided to kill the character off once and for all. The author proposed that, thematically, it would make sense if Batman were to be killed preventing some garden-variety holdup, with one very lucky thug finally getting in the fatal gunshot that a thousand more polished villains couldn't --- it would be a perfect echo of Bruce Wayne's parents being senselessly killed by a random mugger.

This scenario stuck in my mind for years and then it played out on-screen on The Wire as Omar met his final end not in some legendary shootout with Marlo, Chris and Snoop, but was simply shot from behind by a small child in a variety store. Omar never saw it coming. His legend lived on on the streets, but as evidenced by the Baltimore Sun's dismissal of the killing, Omar became just a statistic.

This one scene was essentially the tiebreaker in picking between Bunk and Omar. As great a character as Omar was, as moral as he claimed to be, to some extent he was indeed living a lie about himself. Bunk (probably the most self-assured person on the show) pointed that out to the extreme. This was the Wire's equivalent of the "Batman's presence is harming Gotham by engendering all these rivalries with lunatics" argument.

Despite the fact that the show has had so many amazing characters, it still raises eyebrows whenever Omar isn't number one in a competition like this. Omar won the Grantland tournament pretty easily, and if you polled 100 Wire fans (roughly the same number who watched the show when it was on HBO, hey-o!), I suspect Omar would be named the favourite character by a solid majority. Omar is a great, great character…and yet at the end of the day, I'm picking Bunk Moreland.

FINAL MATCHUP The Bunk (#2 in the Police bracket) vs. Stringer Bell (#1 in the Crime bracket)

After all that, I guess I'm pretty much obligated to pick Bunk to win the whole thing, eh?

Bunk is the Wire's constant. When I picked Bunk over Lester in the third round, I noted that Lester was a "supercop," though with some hindsight, I think Bunk Moreland is the overall best pound-for-pound officer on the Baltimore force. He's essentially a blend of McNulty and Lester, taking both men's best qualities and eliminating both men's main weakness, in the sense that Bunk is willing to 'play the game' a bit more within the department, whereas McNulty will get into a pissing contest with any superior and Lester takes quiet pleasure in bucking the system. It's easy to dismiss Bunk as a good-time, hard-drinking comic relief character but aside from the odd hangover at his desk, it doesn't affect his work. He is nothing less than a stable, competent, entertaining man who plays just as entertaining and as important a role in the pilot as he does in the finale.

Does Bunk not have the ebbs and flows of other characters, like Stringer? True. And yet, this is actually Bunk's strength --- he knows who he is and is content with his lot in life. Virtually every plot in dramatic history is centred around a character's desire for change, and how their attempts to change either lead to their betterment or to their doom. Inactivity is traditionally punished; Hamlet, the most famous tragic character in literature, is famously "a man who cannot make up his mind," and his failure to act until it's too late is what costs him.

All this being said, the three TV series I would cite as the greatest of all time --- The Wire, The Simpsons, and Seinfeld --- are fuelled not by change, but by the status quo. The Simpsons never age, never drastically alter their family dynamic and it's even a running joke how things don't really differ from episode to episode. On Seinfeld, it was a similar running joke that the four characters were stuck in their own self-involved bubble, though this was a joke that wasn't totally revealed to the audience until the finale when the four were finally punished for their self-absorption.

And finally, on The Wire, the entire theme of the show is that the cycle will just keep repeating itself, with every generation getting a bit worse and new faces replacing the old. Sydnor is the new McNulty, Michael is the new Omar, Dukie is the new Bubbles, Carver is essentially the new Daniels, Mike Fletcher is the new Gus and Slim Charles is on his way to becoming either the new Stringer or the new Prop Joe, depending on if his reach exceeds his grasp.

Fun fact: my pal Eric named his two cats after Bunk and Stringer. I suspect his vote in this final matchup would be dependent on which of his cats has been less of a pain in the ass that day. They have a habit of hopping up on the top of his fridge and looking down over the room like gargoyles. Yikes.

Posted by Question Mark at 4:55 PM