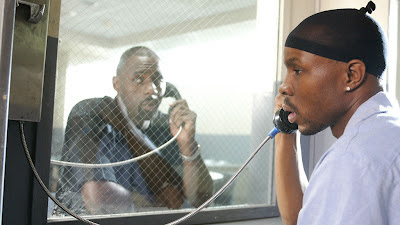 And then there were eight! The ocho! Cal Ripken's number! (Fitting, for THE Baltimore show.) Click the links to catch up on the first, second and third rounds and now let's dive right into discovering our final four.

Streets Bracket….
#1 Omar vs. #2 Bubbles
So yeah, Omar Little. What is there to say about Omar? He's a bolt of superheroic lightning within a show that otherwise stayed as within the bounds of realism as possible. He's the guy who always has a plan, is (almost) always able to carry out said plan, and always has an answer for every tough situation, whether it's being framed for a murder he didn't commit, facing off against (and then owning) Maury Levy on a witness stand or battling Brother Mouzone before they both realize they're being used. Omar was Batman. He only made one mistake in the whole series, falling into the ambush at the apartment and injuring his leg. If Omar doesn't do that, and thus let his guard down so Kenard eventually offs him, Omar was on track to take Marlo down. Remember, Omar's seemingly half-assed plan of going to the corners and openly calling Marlo out was that inspired Marlo's enraged "My name is my name!" speech. Had Marlo learned of Omar's actions while he was still alive, Marlo no doubt would've taken direct action and more than likely would've left him open to get himself got by Omar. Even with a busted leg and seemingly off his game, Omar was still on pace to take down yet another enemy.

Okay, so Omar is Batman. His various boyfriends were the Robins (taking the "Batman's partner" things to an extreme). Butchie was Alfred. Kimmy and Tosha were, say, Batgirl and Huntress. Omar didn't really have a Commissioner Gordon, per se, though McNulty came closest. Brother Mouzone was, like, Green Arrow. I feel like this analogy is breaking down.

Question: did Omar and Bubbles ever actually have a scene together? I was thinking about this just now and, crazy as it sounds, I can't recall off the top of my head a time when these two (arguably the show's most iconic characters) ever directly interacted. That was another fun underrated aspect of the Wire's labyrinthine stories --- it was always exciting when you'd see two well-known characters finally meet for the first time. By the way, if I'm overlooking some super-obvious Omar/Bubbles scene and the fact that I'm forgetting it makes you question my status as a Wire fan, then I apologize.


Police Bracket…
#2 The Bunk vs. #5 Carver
Ellis Carver's Cinderella story is finally over, as the Bunk knocks him off and heads into the final four. I said my pieces about both characters in the last round, so I'm not sure I really have much more to add. "Hey Mark, do you regret not taking McNulty over Carver last round so you'd have more to say here?" Nope! Brevity is the soul of wit!


Institutions Bracket…
#1 Tommy Carcetti vs. #2 Frank Sobotka
Pundits have pointed to the Wire's second season as when the show really took off, and it's a solid argument. If the Wire gets canceled after S1, it goes down in history as a terrific and layered cop show, but "just" as a cop show. By putting the drug trade on the back burner and exploring the docks in S2, however, the Wire really kicked things up a notch and showed that it wasn't just an amped-up version of Homicide (David Simon's previous show), but rather a much more all-encompassing kind of project. As the saying goes about the show, S2 was the first sign we got that Baltimore was the star of the Wire, not any specific character.

This all being said, I'm not sure I agree with the argument. I'd say it was really S3 that what we know as "The Wire" really came into full focus. As much as the docks were a new world for the show, it was still based around the investigation into the dead women in the loading bin and the (at first) trumped up investigation into Sobotka's union affairs. If you stopped watching the show after the first two seasons, you could've guessed that each season would focus on a different type of case for the Major Crimes Unit, but there would still be a case at the heart of what was essentially still a cop show. Season three, however, puts the MCU itself aside to focus on the Hamsterdam story and the politics at City Hall. Sure, the MCU does finally bring down Barksdale, but it's a pyrrhic victory since Marlo has already risen to take Avon's place and the other major target (Stringer Bell) is already dead, which ticks McNulty off to no end. S3's lessened focus on police work set the stage for S4, where the cops are decidedly supporting players and they spend the entire season just solving the mystery of the bodies in the vacants.

Anyway, though Frank is the symbol of S2 and Carcetti is (arguably) the symbol of S3, this is just me shooting the shit about the program. Frank Sobotka is the better character and my pick to win the Institutions Bracket. I waxed rhapsodic about how great a character Carcetti was during the last round, but really, I can't help but pick Frank in this matchup. In just 11 episodes, Chris Bauer created a character so memorable that he was able to follow Stringer & Avon as the show's "big bad" for a season…though, of course, the Greek was the biggest bad of S2, and part of Sobotka's appeal was that though he clearly was crooked, he was also clearly a man in over his head in terms of dealing with "actual" crime. Bauer had the added degree of difficult of acting alongside some fairly weak links in the cast (Nick and Ziggy) but nevertheless absolutely hit a home run in the role. Once I gain time travel abilities and am able to go back and fix things so that the Wire wins all the Emmys it deserved, Bauer absolutely picks up a supporting actor award for his work in this season. It's just too bad we couldn't see more of Frank but, of course, his story wouldn't have been complete without a tragic end.


Crime Bracket…
#1 Stringer Bell vs. #3 Avon Barksdale
If you put together a list of the Wire's greatest scenes, two very high entries (top five at least) would be Stringer and Avon finally fighting it out, and Stringer and Avon on the balcony. What a fantastic, three-season long dance of friendship and brotherhood between these two characters that eventually ends in ruin.

I almost feel that Stringer is so highly regarded amongst Wire fans that it makes Avon underrated by comparison. Even if Stringer had never existed, Avon would still be a very memorable characters, smart and fascinating in his own right. We never get it fully established who exactly came up with the Barksdale crew's elaborate system of codes and pagers, and you would think had it been Stringer alone, he would've brought this up during his power struggle with Avon, so it was likely a joint effort between the two men.

You can feel the "but" coming and here it is. Avon is a great character, BUT, maybe he said it best himself: he's "just a gangster, I suppose." It's like what I said earlier about S1 of the show --- it's fantastic but it's "just a cop show, I suppose." The later seasons are what really turned the show into a unique masterpiece, whereas it's Stringer and his businessman's code of ethics that really elevates the Barksdale gang into a unique and top-level crew. Avon ultimately got the last laugh on Stringer on the show, but it's Mr. Bell who advances in the tournament.
Posted by Question Mark at 4:40 PM

Season 2, when McNulty gets Bubbles to try to find Omar.

There's a scene when Omar pulls the shotgun on Bubbles as he's trying to grab some scrap metal and says something like "You be askin' for me?"

Doc, it's great that you're going back to read these now that you've finished the series. That's true commitment. Sheeeeeeeeet.