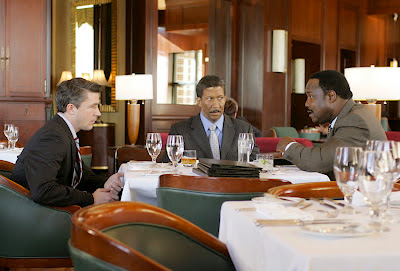 With the first and second rounds in the books, we're into the sweet sixteen of our Wire characters tournament and the race is on to see if I can actually finish this thing before the end of March. Though, the actual March Madness tournament technically ends in April, so I feel I have some breathing room….," he said, creating an excuse for himself.

Streets Bracket….
#1 Omar vs. #5 Randy
Congratulations to Omar for his victory in the Grantland Wire Character tournament! Now that he's conquered the minor leagues, can he step up and capture this tournament as well? He's handily dispatched two opponents already and, frankly, Randy stands about as much of a chance here as he does of getting out of the group home as a well-adjusted human being. Hey Elite Eight….Omar comin'.

#2 Bubbles vs. #3 Michael
In picking Randy over Dukie in the previous round, part of my logic was based on the point that while Dukie's character arc was strong, the actual character himself was sort of nondescript. As Dukie was the "new Bubbles," one could argue the same about Bubbles Classic, except that Andre Royo's performance was so charismatic and strong that Bubbles always felt like part of the mix even when his character was busy with what were essentially side-stories. That being said, the writers did well to involve Bubbles in most of the major plots from season to season without it feeling tacked-on; given how central the drug trade was to the overall series, there was unfortunately no shortage of things for an addict to do. Bubbles was of course a key informant in the cops' investigation of the Barksdale gang, he lost his pal Johnny to Hamsterdam, tried to enroll Sherrod in school and was even a Baltimore Sun delivery man in the fifth season. Had they found some way to make Bubbles a long-lost cousin of Horseface Pakusa, they could've even put him into the docks story….well, that one's maybe a stretch.

After talking this long about Bubbles, it's probably not hard to guess I'm picking him in this matchup, though Michael is such a strong character that it's a close call. This show delivers so much cynicism, though, that I can't eliminate one of the few characters with a legitimately happy ending quite yet. Bubbles gets the win.

Harken back to the second-ever episode of the series. Carver, Herc and Prez are drunk and decide to bust into one of the Barksdale towers, resulting in a near-riot in the projects. It's easy to point to that moment as rock-bottom for all three men, but Herc went on to do all manner of crappy police work while Prez ended up shooting another officer and quitting the force entirely. So the near-riot was essentially par for the course for those two --- but not Carver. Over five seasons, we got to see Carver evolve from being as poor a cop as Herc and Prez into a legitimately fine police officer. Last round I compared Carver to being the cop answer to Bodie, as both grew wider understandings of police work and the drug trade, respectively. In Bodie's case, though, all he did was realize he was in too deep and it ultimately got him killed. With Carver, however, he was continually learning and improving himself from his experiences. No cop from the original major crimes unit is as changed from the first season to the last as Carver; in fact, you can argue that none of cops really change much at all, making his evolution stand out all the more.

"Ellis Carver: The Show" could've been a great series on its own. The fact that he was a relatively minor cog amidst the cast of characters is a testament to just how deep a show The Wire was. But hey, while Carver is terrific, do I really like him enough to pick him over Daniels in the second round and now #1 seed McNulty here? The answer is yes. Let the incredulous comments start in 3, 2, 1…..

#2 The Bunk vs. #3 Lester
How awesome was the scene when Lester and Bunk stroll into the police bullpen in S2? After years of being ignored and taken for granted, here's Cool Lester Smooth, rocking a killer suit, partnered with the Bunk and ready to wreak havoc on Baltimore's criminals. A show that was just Bunk, Lester and Beadie Russell solving crimes would rank high on the 6822-entry list of Wire spinoffs I would totally watch. (Show #6682: a remake of 'Marty' starring Horseface Pakusa.) Though it did take them a season to find those damn bodies in the tenements, Bunk/Lester is the real dream investigative team of The Wire, certainly more capable and professional than Bunk/McNulty.

This is a monster, PPV-worthy battle here in the sweet sixteen and yet for some reason I didn't think about it too hard before sending Bunk onwards. What gives? Lester, as great a character as he is, is never presented as anything less than competent and a veritable supercop. Bunk, for his part, is often drunk, sloppy, and is just a humble motherfucker with a big-ass dick, and yet he's as good as any cop on the force. Bunk is just simply more fun, and yet not so fun that he doesn't take his work seriously. It's Bunk, remember, who is aghast at McNulty's "fake serial killer" plan, whereas Lester eats it up. It's Bunk who also gets a taste of having his talents wasted when he's sent chasing after Dozerman's lost service weapon. I dunno, I think if I had to pick one Wire cop to investigate a crime I'd still take Lester, but Bunk is a very close second.


Crime Bracket….
#1 Stringer Bell vs. #4 Proposition Joe
As you can tell from the seedings in this sweet 16, I'm not straying too far from popular opinion in my picks, or maybe it's just that I did a great job of seeding these brackets (*self high-five*). And yet here in the crime bracket, we've somehow come to this absolutely titanic matchup in just the third round of the tournament, one that could easily stand as the overall final. I don't think anyone would argue Stringer as the #1 of the crime bracket, but you could've at least made a case for Prop Joe as #2 given his overall influence in the series. And yet, it would've seemed somehow wrong to put Joe (who prided himself on staying in the background and not calling too much attention to himself outside of his Pat Riley basketball coaching gear) so high on the list, and ahead of Marlo and Avon, the two leaders of the Baltimore drug trade.

What a tough matchup. As much as I love everything about Prop Joe, I'm going to cast my vote for Stringer. Call it just a case of Stringer being more of a headline character than Joe, since both were equally great characters, well-acted, unique, and beloved by Wire fans. I wish it didn't have to be this way, Joe. Had I not stuck to regional bracketing, he would've very possibly made it to the semis, at least.

#2 Marlo Stanfield vs. #3 Avon Barksdale
For instance, Prop Joe would've beaten either of Marlo or Avon. This is like if you had Djokovic and Federer in one half of a tennis bracket and Andy Murray/David Ferrer as the other semi --- the actual final is going to be pretty anti-climatic. (Uh, for the purposes of this comparison, pretend Rafa Nadal skipped this tournament.)

In the last round, I advanced Marlo over Slim Charles with the argument being that Marlo's nihilism was more interesting than Slim's general good-dude-except-for-the-whole-drug trade thing. Now, I'm going to reverse course and pick Avon over Marlo because….well, Avon's raw emotion simply made more of an impact on me (and, I'd argue, the series) than Marlo's cold detachment, though it's very, very close. The series itself probably wouldn't agree with me, given that Marlo "wins" in the end while Avon is cooped up in jail, a shadow of his former self. Yet I can't think of Avon without two of the very greatest of Wire scenes; he and Stringer passive-aggressively chatting on the balcony after Avon's release, and then the scene when the two best friends finally come to blows over Stringer's role in D'Angelo's murder. When it's a razor-thin matchup like this, I have to turn to what Bill Simmons calls those "chill scenes" that stick in your memory for years to come. Avon may have lost the game to Marlo but at least he'll get some small measure of revenge in the bracket.


Institutions Bracket….
#1 Tommy Carcetti vs. #4 Clay Davis
Here's a rant that even I myself may not totally believe in, but I think there's a point here somewhere. Okay, here goes….Tommy Carcetti is The Wire's most underrated supporting character. Think about it, he's a guy who literally becomes the most important figure in the city and thus, one of the most important characters on the show over the last three seasons. His storylines and the way they affect what's happening on the street (and vice versa, how the street activities affect his political decisions) are endlessly fascinating. As a character himself, Carcetti is likeable yet kind of rotten at the same time --- he isn't an outright villain like so many other figures of the institution since he seems genuinely interested in helping Baltimore yet he's definitely got a scheming side to him. Heck, the first or second time we see Carcetti he's cheating on his wife. Interestingly, David Simon has said he's regretted that scene since it too automatically painted Carcetti as just a philandering politician (you'll note Carcetti is a devoted family man for the rest of the series, including turning down a horny Theresa D'Agostino). This dichotomy makes Carcetti endlessly interesting, since you feel you have a decent handle on his character yet you're never entirely sure how he'll respond to any given situation. The same guy who wants to end Burrell's clearly corrupt reign commissioner is also the guy who'll throw Baltimore's schools under the bus because he doesn't want to accept aid from the governor's office because Carcetti has designs to be governor himself before his first mayoral term is even up.

Yet, with all of this going for him, Carcetti is almost never mentioned as one of the Wire's best characters. Don't get me wrong, everyone likes Carcetti --- there's nothing but good things to say about Aiden Gillen's performance and the incorporation of city hall into the show's world was widely praised. However, Carcetti is just kind of there in terms of how he's perceived within the greater Wireverse. Maybe it's because fans simply couldn't look past how he is, at heart a "corrupt politician" and thus didn't seem as original a creation as some of The Wire's other characters.

This is all my way of explaining that while I think Clay Davis would ride sheeeeeeeit to a win over Carcetti in a lot of brackets, in my eyes, it's not a close race. Just as he does on the show, Carcetti comes out on top.

#2 Frank Sobotka vs. #3 Gus Haynes
Put it this way: when you have one of the most conflicted, morally ambiguous, corrupt but eminently likeable characters on the show against another character who has been called "implausibly saintly" by no less a TV expert than Michael Schur….well, guess what, nice guys finish last. Even Gus, a man who knows a good story when he sees one, would know better than to cut Frank Sobotka's run short this quickly. Get out the red pen and cut Gus' name from the bracket.
Posted by Question Mark at 12:09 PM