A Green Bay Packers Postmortem (or, FOR THE LOVE OF GOD, HOLD ONTO THE DAMNED FOOTBALL!) 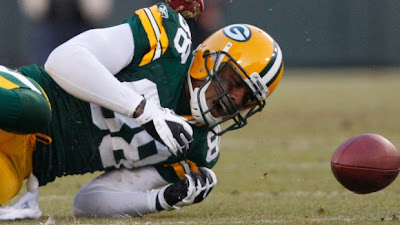 It doesn't matter how many weapons you have if you keep shooting yourself in the foot. That's what makes the Packers' upset loss to the Giants so frustrating --- it was nothing the Giants did to win, it was all what Green Bay did to lose. Nine dropped passes, three lost fumbles, an inexplicably unnecessary onside kick attempt in the second quarter and (perhaps most deflating) giving up a goddamn hail mary touchdown at the end of the first half. Is it sacrilegious to put 'goddamn' and 'hail mary' right next to each other? Tebow forgive me.

I didn't once believe the "Green Bay is getting too many wins, they'll have trouble keeping up the intensity through the playoffs" meme, but man, it turned out to be true. After beating the Bears in Week 16, the Pack rested several starters for a meaningless Week 17 contest with Detroit and still won. Maybe that was the problem. The team began to think, "Man, if we can beat playoff teams with our backup quarterback, we're on easy street." Between that and the week off, it seemed to really take its toll. Green Bay hasn't played a game that's really mattered in over a month, and it's hard to get that intensity back, especially against a New York team who have been playing for their lives over that same stretch.

I firmly believe in the concept that it's better to be lucky than good. The Manning brothers are living proof. Peyton holds dozens of passing records, has tons of wins, is acknowledged as an all-time great…but he has just one Super Bowl win due to buzzard's luck in the playoffs. Be it kickers missing easy field goals, inopportune turnovers, opponents having monster performances or Peyton himself just playing poorly, Peyton hasn't caught many breaks in the postseason. Eli, on the other hand, has one inexplicable run to a Super Bowl already and now he's lucked into facing the fraud Falcons and the self-inflicted wound known as the 2011-12 Packers. The Giants/49ers matchup next week is a tossup but San Francisco is certainly not a flawless team. Could Eli somehow sneak his way to another NFL title? Ye gods.

Big picture: the Packers won the Super Bowl last year, blah blah, five-year no complaining rule, blah blah blah, the team had so much go right over the last year that they were due for some bad luck, BLARGH. Forget the big picture, this one still hurts a ton.

It's probably not a coincidence that Green Bay won the title last year with Jermichael "Hands Of Stone" Finley and Ryan "Laurence Maroney" Grant injured. What a couple of stiffs. Grant is completely washed up at this point and should be instantly cut. Finley, I'm afraid, is a bigger issue, since he has enough tools and ability that he'll be kept around as the primary tight end threat, but trust me, there is a yawning chasm between this guy and REAL tight end threats like Jimmy Graham, Rob Gronkowski and Vernon Davis. Finley right now is giving off a real Braylon Edwards/Kellen Winslow Jr. vibe, and that's not something you need. Ditch both of these guys, draft some more bodies on defence, hook B.J. Raji up to either the rejuvenation machine or with a new pot dealer and reload from there.

Another issue: distracted coaches. I'm not even talking about the personal tragedy suffered by Joe Philbin this past week, but rather the fact that former Packer exec Reggie McKenzie is the new Oakland Raiders GM. He's apparently already targeted Packer coaches Winston Moss and Dom Capers for interviews to be the new Raiders head coach. Between this, Philbin interviewing for the head coaching job in Miami and quarterbacks coach Tom Clements being mentioned for coordinator jobs around the league, one wonders if the organization's total focus was on the New York Giants this week.

So yeah, that about concludes this post I absolutely hated to write. This will probably mark the end of my NFL picks posts for this winter; in fact, I've already made plans to attend a pub trivia night on Sunday rather than watch the fucking Giants play for the NFC championship. I'm just going into a little shell of football bitterness for the next seven months. It won't be an overall sports fan shell, at least. Baseball season is just around the corner and hey, the Leafs could make a Stanley Cup run….oh god, my eyes are watering….
Posted by Question Mark at 9:03 PM