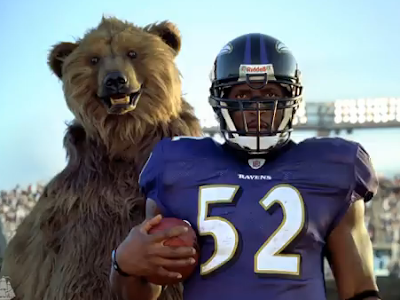 * Ravens over Texans
With their first playoff appearance and now their first playoff win in franchise history, this has already been a red-letter year for Houston. It's going to come to an end but really, how the team be mad? They overcame injuries to virtually all of their best players and still found themselves in the final eight. That's a nice showing all-around, and if you're looking for dark horse Super Bowl contenders for 2012-13, you could do worse than betting on a fully-healthy Houston Texans side.

Baltimore is going to win this game because if they don't, the team has to be torn apart and rebuilt. The Ravens will never have as good a chance as they do right now to reach the Super Bowl now that their arch-nemeses from Pittsburgh have been eliminated. Either the Patriots or Broncos are very beatable opponents for the Ravens, so they can't waste the opportunity by losing at home to a team quarterbacked by Tyler goddamn Yates. I think Houston's only chance would be if Arian Foster just goes off or Andre Johnson* eats Baltimore's lousy cornerbacks alive and cements himself as the best receiver remaining in the postseason.

* = My list of the best wide receivers in the NFL. 1. Larry Fitzgerald, 2. Calvin Johnson, 3. Andre Johnson, 4. Wes Welker, 5. Steve Smith. There are a whole lot of guys in the mix for fifth and you can argue all day that numerous great receivers are held back by lousy quarterbacks, but I'll take my chances saying Welker, Fitzy and the Johnsons are the hands-down top four.

For the second straight year, we're looking at a realistic possibility of a Packers vs. Ravens Super Bowl, a.k.a. Armageddon between my brother and I. It's a good thing I'm moved to Toronto year-round now or else the two weeks leading up to such a Super Bowl would carry more tension around my house than a Montague/Capulet family vs. family flag football game. If it really comes down to Packers/Ravens my brother and I will have to wager a slap bet on the outcome just to really crank things up to eleven.


* Patriots over Broncos
I don't think Tim Tebow can call himself a virgin anymore, since he screwed millions of bettors last week with his latest nail-biter victory over the heavily-favoured Steelers. Just when you thought Tebowmania was running cold, the Broncos get their biggest and most improbable win yet, and one rife with religious metaphors. To wit….

"In the Pittsburgh game, they played in the stadium that's closest to heaven (Mile High). Tebow threw for 316 yards. Rothlisberger's interception came on 3rd and 16. Pittsburgh's time of possession was 31 minutes and 6 seconds. Tebow's average yards per completion was 31.6. Someone named John told Tebow to pull trigger on the final TD. And Demaryius Thomas, the target for Tebow's game winner, was born on Christmas." --- Matthias Lahn, Bill Simmons reader and a man more into finding meaning in numbers than your average Lost viewer

But surely, not even the magical mystery Tebow can go into New England and defeat a rested, prepared, just-plain-way-better Patriots team, can they? Well…the Pats have fallen victim to the Jets and Ravens in recent years, two teams that also play the same conservative, defense-first-and-second gameplay as the Broncos. New England's secondary is so bad that even Tebow will be able to rack up the yards. If Denver just keeps it close, the pressure will start building on the Pats, the home fans will start quieting down since they feel the guillotine lifting, and they won't be able to escape the feeling that if it's close at the end, Tebow will find a way.

Of course, the other nine out of 10 times, the Patriots hand Denver a mighty loss just like they did back in Week 15. As one internet commenter put it, "I don't think God favours anyone more than he favours Tom Brady, so Tebow is out of luck." My prediction is that the Patriots ultimately win comfortably, though the Broncos are able to keep it relatively close for a few quarters. Tebow ends up passing for exactly 350 yards, meaning his playoff yardage total adds up to 666, creating a new round of conspiracy theories for the offseason.


* Saints over 49ers
Hardest game of the week to call, by a wide margin. New Orleans is just on such a massive roll that I have to pick them but the 49ers are hardly chopped meat. They're 13-3 for crying out loud. They're very well-coached, tough defensively, never get blown out even then do lose and they have a big, tough running back in Frank Gore. This is a team built to slow down the Saints at worst, and make them submit at best. The Saints, remember, were only 5-3 on the road this year and Candlestick Park is not an easy place to play.

Argh, I feel like I'm talking myself into picking San Fran here. Let me check out their roster and see who their quarterback is again…..ah, that's right, it's Alex Smith. There we go. Enthusiasm, deflated. Smith has turned himself into at least a middling QB this season, but the 49er offence is definitely of the bend-but-not-break variety rather than being legitimately threatening. I just don't see how the Niners can mount a comeback if they fall behind by anything more than 10 points.

A word about Patrick Willis, universally regarded as one of the very best linebackers in football and arguably THE best linebacker in football. I've written about this before, but in the 2007 draft, Willis was seen as a can't-miss prospect. Literally every prognosticator and draft pundit said Willis was going to be a stud LB for the next decade. So, naturally, Willis is taken….eleventh overall. ELEVENTH. How did this happen?! How do 10 teams see this sure-thing, star-in-the-making linebacker and all pass on him?! It boggles the mind. The only teams I'm letting off the hook are the Lions, Browns and Vikings, since they took Calvin Johnson, Joe Thomas and Adrian Peterson, which are okay selections. But god, this was the infamous JaMarcus Russell #1 overall draft. What the hell, Raiders. This was the draft when the Dolphins reached to take Ted Ginn two picks before Willis went to San Francisco. Gaines Adams went fourth overall and he's fucking DEAD now. The moral of the story is, don't pass on Patrick Willis.


* Packers over Giants
Though I knew Atlanta was a fraud and was going to get smoked last week, I still picked them in the name of the Packers getting an easier matchup. Oh well. Green Bay faced nothing but hardship on their route on the Super Bowl last year, so having to host a very flawed Giants team at home is hardly the worst thing that can happen this time around. In terms of real-world bad things, offensive coordinator Joe Philbin losing his son this past week infinitely dwarfs any complaints the Pack may have about their tough draw.

Jason Pierre-Paul, Justin Tuck and Osi Umenyiora are monsters, absolute monsters, and will give Green Bay's O-line all they can handle. This is the key matchup of the game, no question. If the Giants can pressure Aaron Rodgers, they can more than slow the Packers down. If Rodgers can withstand the pressure and still fire passes off, then New York's otherwise mediocre defence will fold and the Packers will get a comfortable win. It's as simple as this.

With the Giants' fearsome pass rush, their late-season win streak and their matchup against an offensive juggernaut, folks are noting the similarities to New York's 2007 Super Bowl title team. Yeah, well, calm down. The Falcons (frauds), Cowboys (lousy) and Jets (lousy) are not exactly the three biggest scalps to have in your three-game win streak. On the road, at Lambeau Field, against the best quarterback in the world and his 15-1 team? I'm not buying it. The Giants have the ingredients to upset the Packers but the recipe is missing a few pages.
Posted by Question Mark at 2:30 PM

actually it is "Mathias"...but Bill somehow got my name wrong.

the bad thing: I'm a Steelers fan, but if someone beat us, I'm happy for Tim.

That's hilarious. Good to hear from you, Mathias. Given how my Packers played last week, I feel your pain about the Steelers.