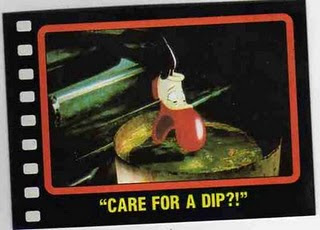 The "30 Day Movie Challenge" is a Facebook meme that requires you to answer 30 film-related questions, one per day, all in the form of posting a picture from said film on your FB wall or within a photo album. Instead, I will disregard the format of this meme and simply answer the questions in straight-up text style in groups of five, since my search for blog content is neverending. Hmm, is that a hint that The Neverending Story will be an entry? Stay tuned!

(Credit to one of my ex-film and english profs, Chris Lockett, for passing this meme along.)

1. Current Favourite Movie
Pulp Fiction. This title basically ping-pongs between two choices (the other I'll surely cover later in this series), and since I've seen Pulp Fiction more recently, it gets to wear the belt for the time being. Fun side note: I was inspired to watch PF again thanks to the recent homage on an episode of 'Community.'

2. Favourite Cartoon Movie
Who Framed Roger Rabbit? Okay, so it's not *entirely* a cartoon, but come on. Any film that features Mickey Mouse trading quips with Bugs Bunny, plus Donald and Daffy Duck trying to one-up each other in a piano bar surely qualifies. Also...Judge Doom's "transformation" (for lack of a better term) was one of the scariest scenes of my childhood. "Remember me, Eddie? When I killed your brother I talked just....LIKE.....THISSSSSSS!"

3. Last Movie You Saw In Theatres
Your Highness. Sigh. Well, in my defense, it was a slow afternoon, and I had a free movie owed to me via my SCENE card. It was also recommended by my friend Dave, but about five minutes into the previews, I suddenly remembered that Dave is the guy I've often described as the Aficionado Of Shitty Movies. Anyway, 'Your Highness' wasn't entirely terrible, but for a spoof of medieval adventure movies, most of the film is played pretty straight. Virtually all of the comedy comes from Danny McBride, so if you find him funny, you'll like the movie, but while I'm a McBride fan from the hilarious Eastbound & Down, even my pro-McBride stance wasn't enough for me.

4. A Movie From Your Childhood
Fantasia. I'll take a page from Chris' book and cite a film that isn't one of my childhood favourites, per se, but rather just one that brings back a strong childhood memory. 'Fantasia' gets the nod since I saw it about a half-dozen times as a kid, and every time I watched it, I couldn't help but think that it was THE MOST BORING FUCKING MOVIE EVER MADE. It taught me that a cartoon could be bad. I saw it again for a high school music class and wondered if seeing it with more mature eyes would finally make me realize its innovative mixture of classical music and anim NOPE, STILL BORING AS SIN.