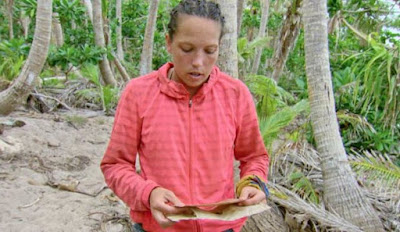 It’s become a running gag in Survivor that the seasons with casts at last half-comprised of returning players are always won by players with middling results in their previous try.*  Sure enough, we add to that legacy with a blah winner in Sarah Lacina winning a blah season overall, minus the wonderful five added chapters in The Book Of Sandra.  Despite my general boredom with Sarah as a Survivor character, she inarguably played a strong game under unusual circumstances, so let’s break down her victory.

* = the exception, of course, being Sandra’s awesome win in Heroes vs. Villains.  Ah, Queen Sandra.  I was hoping against hope that she could somehow pull out another victory this year, and the crazy part is, she did extraordinarily well.  She had a giant target on her back as the only two-time winner, she had no luck in tribe shuffles….and yet Sandra managed to make it through FOUR tribal councils before even getting a vote.  That is just scary good.  If she’d been shuffled into even a slightly stronger tribe, she gets to make at least the merge and then we’re guaranteed the instant joy that would’ve been Sandra on a jury.  It isn’t any coincidence as soon as Sandra was eliminated, the season took a sharp downturn into ugliness.

How She Won: In short, she was the cop that “played like a criminal,” which is the kind of TV-friendly tagline that Jeff Probst and company just adore.  I can appreciate that Sarah obviously had some compunctions about coming off as scheming or distrustful on national television when her entire profession is built around trust and honesty, but at the end of the day, it’s Survivor.  It’s a game.  “There’s no villain in Monopoly,” as Jon Penner would say.  It doesn’t seem like it would be that hard to make that mental leap, but to Sarah’s credit, it was all systems go once she adopted her “criminal” mentality.

As I’ve written before, luck is a gigantic part of every Survivor win, and this was particularly true in a season loaded (or, really, overloaded) with tribe swaps, hidden idols, hidden advantages and goofy twists to try and justify the “Game Changers” tagline.*  It is some great karmic justice that so many of the producers’ favourite characters — Malcolm, Sandra, Michaela and especially Cirie —- were eliminated by all of these twists, and hopefully this convinces the show to dial it back a few notches.  Any so-called all-star season that ends with the who-cares final three of Sarah, Brad Culpepper and Troyzan would hopefully result in some heads rolling in the production offices.

* = Have we seen the end of the days when a season is just called Survivor: Location?  Given the Heroes vs. Healers vs. Hustlers subtitle for next year, the answer appears to be yes.

Sarah’s biggest achievement was benefitting from all of these twists.  She didn’t even attend tribal council until the sixth vote, and then she was part of two easy calls in eliminating Sandra and Varner.  She was the one that noticed the secret advantage on the reward challenge platform that Michaela ignored, leading to Sarah getting the vote steal and using it properly to eliminate (ironically) Michaela herself.  She was the one who played Sierra so badly that Sierra gave SARAH the legacy idol instead of Brad, her BFF throughout the game, even though Sarah orchestrated Sierra’s elimination specifically to get that idol.

The legacy idol allowed Sarah to avoid her only direct brush with elimination, as in the infamous tribal council when Cirie was eliminated, Sarah received three votes and would’ve gone home.  And then that led to Sarah’s one true biggest “lucky” break when things were totally out of her hands, as Brad inexplicably decided that Tai was a bigger threat in a final three than Sarah.  Tai!  The guy who’d already crapped the bed in a final three in S32!  The guy whose game nobody respected since he was such a flip-flopper.  I guess Culpepper’s logic was that Tai was more well-liked than Sarah, but while I don’t think Sarah is getting Xmas cards from too many of the jurors, they still clearly thought she brought more to the table than Tai.  Note to self: if I ever get arrested and brought to trial while visiting the greater Tampa Bay area, DO NOT hire Brad Culpepper as my attorney.

Skill set: As mentioned, Sarah did a good job of adapting to all the twists and using them to her advantage.  I’ll also make particular mention of her final tribal council speech, which goes on the short list of most memorable defenses of their game by any winner.  Sarah instantly defused some bad vibes that might’ve been coming her way by explaining her “play like a criminal” act as similar to going undercover to gain trust.  That was outstanding.  It was, pardon the pun, a Get Out Of Jail Free card for her entire game.  I mean, one doesn’t need a great speech when your opponents are Troyzan and Brad “Lionel Hutz” Culpepper, but still, Sarah perfectly owned her actions.  It was a little Heidik-esque in the sense that Sarah couldn’t help but totally burn some people (Sierra, Debbie) and thus they weren’t going to vote for her regardless, and of course Ozzy would totally vicariously vote for the guy who won five challenges as the winner….but ultimately, Sarah made sure that she burned less people than she sent to the jury with relatively good feelings towards her.  Or, at least, better feelings than were felt towards Troyzan and Brad.

Could She Do It Again?: Ironically, now that Sarah has “played like a criminal,” I feel she’s made herself a much bigger target in a hypothetical return season.  We saw how quickly her pal Tony got himself shellacked this season, by comparison.  It’s hard to say if she’d be able to avoid as many problems in her third time as she did in her third time, as we’ve still never really seen how Sarah directly reacts to a situation not going her way.  (She was blindsided in one-off fashion in S28, remember.)

I’m tempted to put her slightly higher than a mid-tier of winners, though as a viewer, I honestly didn’t find her particularly interesting.  She goes into that batch of winners like Tyson, Mike, Michele, Cochran, Todd, etc. whose victory I can respect but I don’t really want to see them on my TV again.  Am I still bitter about Sandra and Cirie getting eliminated amidst a particularly poorly-edited season of Survivor?  Noooooooooooo
Posted by Question Mark at 4:18 AM