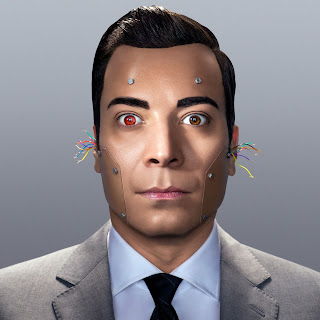 I always felt that Hamlet was a very subtly comic play, no moreso than the ending, if you look at it from Fortinbras' point of view.  Here's young Fortinbras, all full of piss and vinegar after Hamlet Sr. slays Fortinbras Sr., and Forty Jr. plays to avenge his dad by taking over Denmark.  He puts together an army, storms the Elsinore castle…and finds his work has been done for him.  Fortinbras walks in on a court full of dead people and Horatio standing there going, "Dude, wait'll I tell you about THIS shit."  The parallel is supposed to be that Hamlet couldn't act until he it was too late and was punished for it, whereas Fortinbras did act and was ultimately rewarded with the throne but it really comes off as Fortinbras kind of falling ass-backwards into the kingdom.

So yeah, as you see where I'm going with this, Jimmy Fallon is Fortinbras.  After all the dust has settled in the late-night wars over the last five years (really, over the last 20 years), it looks as if the Tonight Show will indeed become property of ol' Giggles McSketchBreak himself by 2014 when Jay Leno's contract is up.  Bill Carter reported the news and, given how he is as connected to the late-night gossip as anyone, I'd tend to take his word to the bank.

This isn't a total shock since, naturally, Fallon has been seen the natural successor to Leno ever since the whole Conan fiasco reinstalled Leno at the Tonight Show, turfed Conan from NBC completely and left Fallon just doing his thing on the Late Night show.  But still….Jimmy Fallon as the reigning king of the Tonight Show is still hard to quite wrap one's head around.  Granted, this is largely due to my own prejudice since I've seen maybe four episodes of Fallon's show ever and still just think of him as "that either overrated/waste of talent guy from SNL who cracked up in half his sketches."  Just when I've accepted (with no small degree of shock) that Drew Carey is this generation's Bob Barker, Ryan Seacrest is this generation's Dick Clark and Matt Lauer may be the next generation's Alex Trebek, now I've got to get used to Fallon as the new Johnny Carson?  And remember, Fallon is only 38, so if he wants it, he could easily have a Carson-esque run of longevity on the Tonight Show.

* This all presumes that Jay Leno will actually go quietly in 2014 which, as we've seen before, is no sure bet.  It seems like NBC is actually determined to let Leno go this time since they may have the leverage of Leno not having any place to go to get revenge --- Jimmy Kimmel is set at 11:30 at ABC, FOX has shown no interest in getting back into the late night game and CBS has Letterman for the next few years plus whomever Letterman's hand-picked replacement will be after that.  I can't decide what would be funnier: TBS throwing over Conan overboard to pursue Leno or CBS deciding on Leno as Letterman's replacement, which would lead to Letterman's funniest monologues EVER for those final couple of months.

* That Fallon can comfortably transition to 11:30, which I'm actually not worried about.  The major takeaway from Bill Carter's story wasn't that Fallon would take over the Tonight Show but that the Tonight Show will move to New York City.  So Fallon, essentially, will get to run his exact same show from the exact same spot (maybe a new studio in 30 Rock but still in 30 Rock) with the same crew, the Roots, etc.  From what I know of Fallon's show, it doesn't sound like he's doing anything so esoteric that it wouldn't translate to earlier in the evening, so the traditionally-older Tonight Show viewers will probably take to him.  Or, it'll be because they all think Fallon reminds them of their grandkids.  BTW, let's not overlook the fact that now NBC Is accommodating Fallon by moving the Tonight Show to New York while they insisted on moving Conan and his whole crew out to Burbank.  I really believe that move was one of the major factors that killed Conan's stint as host; his manic energy worked in NYC whereas it didn't play as well in front of the laid-back, tourist-filled California audiences.

* This all presumes that NBC will actually still be around for any longer than 5-10 years given how the entire network seems to be imploding on itself like a black hole.  Fallon may lose the 'king of late night' title by default to Kimmel or Letterman's replacement or Jon Stewart or whomever simply by dint of the fact that the Tonight Show will get pawned off on the USA Network while NBC becomes a 24/7 Voice rerun network.

By fall 2014, the late night scene will be Fallon, Kimmel and Letterman on the networks at 11:35, Conan plugging away on TBS at 11, Stewart and Colbert from 11 to midnight, then Craig Ferguson and whomever the new Late Night host will be at 12:35.  Then you've got to figure that Letterman will be retiring soon after Leno goes (for one last big of comeuppance) and we'll have another war over who takes over his seat.  The hot rumour is that CBS has been keen to have Jon Stewart do it, so that could lead to Stewart taking over for Letterman and maybe John Oliver take over the Daily Show.  Ferguson could also seem like a logical choice to replace Letterman but opinion is split as to whether Ferguson would want the job since he's so happy in getting free reign at 12:35, whereas taking over The Late Show would lead to more network influence.

So really, who knows how things will shake out over the next few years.  And, in a way, who cares, since I'm sure for most people, this won't matter *quite* as much since everyone just catches important clips from the late shows the next day anyway.  It could all be much ado about nothing….but that's not the Shakespeare reference we're making here.  Let's see, Fallon is Fortinbras, does that make Leno into Claudius?  Does it make Conan into Hamlet (or poor Yorick)?  Kimmel and Ferguson the two gravediggers, just watching everything from afar and making their own fun?  Chelsea Handler as Ophelia?  I feel like this analogy is falling apart.

My suggestion: just have Louis CK do everything.
Posted by Question Mark at 5:34 PM