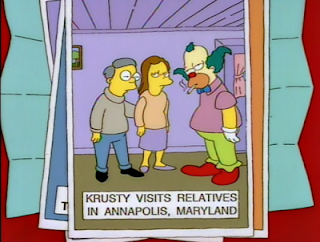 Unless the new set of Krusty trading cards, I will never run out of ideas!  We're already up to the third installment of Simpsons lines that have permeated my everyday dialogue, following the original post and the first addendum.  This list is going to end up having more addenda than the minutes of your average People's Front Of Judea meeting and oh god, now I kind of want to do a list of Monty Python lines I use on a near-daily basis.  This will never end.

"I'd have looked quite the fool.  An April Fool, as it were."
"Why must you turn my office into a house of lies?"
"My Achilles heel, if you will."
"My mom says I'm cool."
"Woo hoo!  Look at that flubber fly!"
"Thank you for coming!  I'll see you in hell!"
"Uh oh, my heart just stopped……..There it goes!"
"Talk to the audience?  Ugh, that's always death."
"Hey there, Blimpy Boy, flying through the sky so fancy free."
"Just...working…the turkey…through."
"Zookeeper, zookeeper!  I think those monkeys are killing each other!"
"I don't think he's coming back."
"Now we're into the dregs."
"I don't use the word 'hero' very often, but you are the greatest hero in American history."
"Shut up, that's why!"
"Well, that just kept going."
"I wasn't really going to kill you.  I was just going to cut you."
"I dunno, Coast Guard?"
"You can see the bind I'm in."
"Sometimes I think you WANT to fail."  "Shut up, just shut up!"
"Oh man, now my pants are chafing me."
Posted by Question Mark at 4:27 PM