Take This Waltz (a.k.a. Take This Litmus Test) 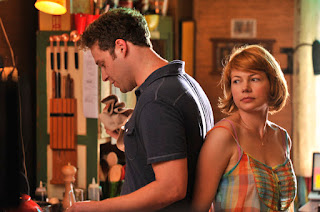 "Take This Waltz" is a difficult movie to objectively review, since it's the kind of film that an audience can't help but watch through the lens of their own personal baggage about infidelity.  My overall impression is that it isn't a very good movie* but I'm perfectly willing to admit that I was influenced by my own views on monogamy.  As a fan of Sarah Polley and all the actors involved, I certainly wanted to enjoy this film going in, but it just left me feeling blah.  Maybe the title was a bad omen --- I like everything about Leonard Cohen on paper except for actually listening to his terrible music.

* = Howard Hawks once said that the key to making a good movie is just to have three good scenes and no bad scenes.  Well, "Take This Waltz" has two glaringly bad scenes.  The entire film is almost sunk in the first five minutes by Margot and Daniel's idiotically cutesy dialogue on the plane; we're supposed to believe these two are soulmates based on THAT?  The second bad scene is Geraldine's relapse, wherein Sarah Silverman takes the "hey, Silverman is really good in this role" vibe and decides to morph her performance into a grade school VIP program presentation about the dangers of alcoholism.

Just to get it out of the way quickly, here's my own baggage.  Infidelity: I'm against it!  (I'll pause for a moment while you all gasp at my controversial stance.)  Infidelity is a generally a selfish and petty thing to do to the person you're in the relationship with, and if you're really that unsatisfied, about 75% of the time there's no good reason you couldn't have just ended the relationship altogether first instead of being a cheating dickhead.  There are, of course, sometimes extenuating circumstances behind cheats, but in the large majority of cases, I disapprove.

Now, the flip side of that.  It's very easy to me to look down on cheaters from my high horse since I've never been in a serious relationship.  You'll notice all the "hey ladies, I'm single" jokes on the blog over the years never stopped for any significant period of time, did they?  As such, I have no direct experience in dealing with the pressures of a marriage or even a long-term relationship so essentially, who the fuck am I to judge?  I've never cheated or been cheated on, but by that same token I've never really gotten to the point where either of us would be Cheating On This Relationship since that would imply that there's a proper relationship there to begin with.  By that token I'm probably not the ideal audience for "Take This Waltz" -- my black/white view of infidelity basically means I can just interpret this film on a surface level, whereas those who are in marriages (or have been through situations similar to this) can no doubt relate to the movie in a much deeper way.

But, to quote Principal Skinner at the 4-H Club, am I so out of touch?!  I mean, Margot and Daniel are pretty unlikable characters, right?  Michelle Williams (an excellent actress) is given the thankless task of trying to breathe life into a character who is unsatisfied with her seemingly lovely life and yet seems to be just "unsatisfied" in some airy, obscure way.  Which, admittedly, seems to be the point, as sometimes relationships just run out of steam and whatever magical It Factor was keeping you together just isn't there anymore.  This is all well and good but it's harder to generate sympathy for Margot when not only does she not have anything to be dissatisfied about, she doesn't even have enough personality to bring this dissatisfaction to life in an interesting way.  I can't tell if this is a failing of Williams' performance or Polley's script.

Then you have Daniel, a REAL douche who just keeps on interacting with Margot despite knowing that she's married.  This might be another baggage moment for me, since if I met a woman on an airplane and really hit it off, only to have her mention that she's married at close to the last minute, I'd take it in stride.  "Losing a no-hitter in the late innings," as I believe Bill Simmons once referred to such situations.  But learning that my dream woman lived literally 50 yards away from me?  I'm sorry, but then it'd go from tragedy to comedy.  The sheer absurdity would overwhelm me and I'd just laugh it all off and probably go on to be great platonic friends with dream woman and her husband.  Hell, I'd probably even tell the husband about it in a "hey dude, funny story, so when I first met Margot, I really dug her…"  Lou seems like he'd be cool with that.  It's a Seth Rogen character, so I can only presume he's as laid-back as it gets.

Not Daniel, though.  Daniel just keeps pining away for Margot throughout his Toronto hipster stereotype existence as an amateur artist/rickshaw driver.*  As I noted earlier, Margot is pretty unsympathetic but at least she has the argument that the spark is gone from her marriage.  Daniel, on the other hand, is straight-up pursuing a married woman.  Dick move, bro.  This instantly lowers my opinion of him and lowers my opinion of Margot for falling for this clown.

* = And also seemingly the greatest athlete in the world.  "Take This Waltz" is filmed and set in Toronto though it takes some very liberal usage of T.O. geography.  For instance, Daniel and Margot go for a walk at one point that apparently takes them from one end of the city to the other, with even a stopover at Toronto Island.  Daniel is also able to carry passengers enormous distances in his rickshaw while barely being out of breath.  Daniel should give up the rickshaw and join Canada's long-distance track squad.

That aforementioned terrible scene of Margot and Daniel was a real failing of the script since that was essentially their only dialogue together before they get into the montage of meaningful glances as they walk out of the airport and share a cab back to the neighbourhood.  Mark's Baggage #3: I don't believe in love at first sight.  Lust at first sight, hell yes*, but not true love.  You're not discovering your soulmate the first time you stare deeply into their eyes or such hogwash.  I especially don't believe it as a storytelling device, since in my eyes, Margot and Daniel went from having no chemistry to sitting in a restaurant 30 minutes of screentime later talking each other off.  That's a big leap.

* = I myself probably had lust at first sight about six times in the last 24 hours alone.  Why do so many attractive women live in Toronto?!  It's like some beautiful curse!

This weakness at the heart of the Margot/Daniel relationship sours the whole thing for me, which is interesting since technically, they do nothing wrong.  If a friend came to me and said she had severe feelings for another man and that she wasn't into her marriage anymore, I'd probably advise her to be honest with her husband and then probably split up.  Which, as it happens, is exactly what Margot does with Lou.  There's no actual cheating between Margot and Dan, not in the physical sense (though there's a boatload in the emotional sense, which is probably worse).  Margot is visibly torn between her feelings for both Dan and Lou.  Daniel even takes a momentary trip on the high road when he moves out the neighbourhood out of guilt.  Really, Margot approaches this in the theoretical "nicest" way that I could imagine, and yet it still left me feeling sour.

Mark's Baggage #4: I am easily bored by other people, which is probably a projection of an inherent fear that people will find me boring.  Ergo, Lou's situation is a real worst case scenario for me.  Lou is comfortably settled into what he thinks is a stable married life with the woman he loves, misguidedly confident enough in their bond that he is totally cool with he and Margot barely talking during their fifth anniversary dinner, interpreting that as a sign of how comfortable they are with other.  Little does he know that she is all-in with the rickshaw driver down the street.  I really enjoyed how Polley presented the "Margot tells Lou" scene, cutting it down to just two minutes of Rogen reaction takes and dealing with that key sequence efficiently without short-changing its importance.

It's probably no surprise that I sympathize with the affable galoot Seth Rogen character, being an affable galoot myself.  Lou's greatest crime seems to be that he gets into a rut and doesn't realize he's in a rut.  That's all it took.  That scares me even further since hey, I'd hate to be five years into a marriage without realizing I'm suddenly dull as dishwater.  Perhaps I should endeavour to be as openly boring as possible so any potential wife knows what she's getting into with me.  This tactic can't possi-blye fail!

And then the ending.  Margot and Daniel seem happy as clams in their (assuredly overpriced) loft space, banging each other silly and even having a couple of threeways with randoms, since, uh, okay, sure, why not.  Then Margot heads over to Lou's house to deal with Geraldine's poorly-acted relapse, feels sorry for leaving and then returns to her apartment to stare forlornly into the stove, seemingly unsatisfied again.  I'm not sure if the ending was supposed to mean…

a) "Any relationship, no matter how perfect, has tough moments where you wonder if you're doing the right thing."

b) "Geez, this Margot is one flaky idiot."

…but guess which letter I chose.  Actually, I guess the third option would be that Margot is looking into the stove since she really misses Lou's chicken dishes.  Surely some cook has already created a chicken recipe book called "Tastes Like Chicken" in real life, right?  That's too much of a slam-dunk to not have already happened.

Ultimately I've got to go thumbs-down on "Take This Waltz" at this point in my life.  Give it ten years and at least one failed marriage and I might think the film is completely bang-on about the state of modern relationships.  If nothing else, Sarah Polley has at least created probably the single greatest dating trap in cinematic history.  Take all these issues I've discussed in this post and imagine them being discussed by an actual couple who's leaving the theatre and unwittingly lighting the powder keg by asking each other, "So, what'd you think?"  That innocent question could very easily lead to a relationship-ending fight.  If your significant other keeps begging you to go see this movie, beware, it might be a ploy.  You might end up forlornly eating chicken on your front porch, watching your spouse/girlfriend/boyfriend going down the road in a rickshaw pulled by some homewrecker.

Incidentally, "Take This, Waltz!" is also what Woody Harrelson (upset over the results of the 2009 Supporting Actor Oscar race) drunkenly yells before tossing a shoe at his television during a screening of Inglourious Basterds.
Posted by Question Mark at 2:16 PM

This was a very funny, honest review and mine, a terribly boring comment. Thanks for doing this in such a humorous way! :)