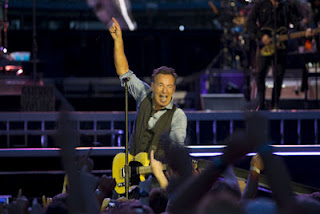 You know what's weird?  Bruce Springsteen has never heard outright applause from an audience.  No matter how well he performs, a good chunk of the crowd will always be chanting "Bruuuuuuuuuce," so it sounds vaguely like booing.  Maybe this is why Bruce is always working so hard in his concerts -- he hopes that one day, he'll finally hear a unanimous wall of pure cheering from the fans.  Surely that will be enough to finally his father's approval, ISN'T THAT RIGHT, PAPA SPRINGSTEEN?!

If ever a concert deserved such complete, not-even-sounds-like-a-boo praise, it's the mammoth that Bruce and the E Street Band dropped on Toronto last night.  Good lord, what a show.  Three and a half hours of pure music.  I will repeat that, three and a half hours!  210 minutes!  From a band largely comprised of men in their sixties!  I never have been, and never will be, in as good a shape as Springsteen is at age 62, all running around the big stage and singing his heart out for the length of that epic show.  Incredibly, at 210 minutes, this is actually one of the *shorter* shows of Bruce's current tour.  These guys are machines.  I'm starting to think that Roy Bittan's "professor" nickname is actually fact, and he's injecting these guys with some Armstrong-quality drugs before every show.

It was my third Bruce concert and my first at the Rogers Centre, rather than the ACC.  It was another of those perfect outdoor concerts that the venue can provide --- great weather, full house and just a crazy-good band giving everything they had.  While my previous two E Street Band shows (in 2002 and 2007) were great, this one was a cut above.  I'd have to think about it a bit more but as of this moment, I'll state that Friday night's Springsteen show was the single best concert I've ever seen in my life.  Even better than Sharon, Lois & Bram at Alumni Hall when I was five years old.  THAT good.

My concert-going companion was my friend Dan, who, if anything, is an even bigger Boss fan than I.  It was Dan's third Springsteen show as well, but he's seen Bruce play in Buffalo -- if you cross a border to see an act, that gives you more street cred.  Dan stands out amongst my friends as the guy who's arguably the most enthusiastic about music in general.  The first time I met him was at a school newspaper social back in university and Weezer's "Pinkerton" album happened to be playing, and thus I was treated to Dan giving drunken and FIRED UP commentary about every song on the record and how great they all were.  As good an album as Pinkerton is by itself, Dan's play-by-play made it even better.  Perhaps that's another sign of Bruce's form on this night, as Dan spent most of it just in seemingly awed silence about just how goddamn good this concert was.

Dan particularly dug the setlist, which checked a number of tunes off his E Street Band live bucket list and was just about the closest thing possible to an ideal Springsteen set.  It had live-favourite album tracks, some very deep cuts, a nice selection of new stuff from Bruce's latest record and then a jaw-dropping string of his biggest hits during an encore that just wouldn't end.  Seriously, the lights at the building came on at 11 PM but Bruce kept going for 40 more minutes!  You could see the ever-growing crowd of maintenance and clean-up crews in their orange jackets just milling about, waiting to get started.  Springsteen, a true friend of the working man, earned those guys a lot of overtime pay.

Here's the full list of songs, several of which ran 10-15 minutes in length.  I think the cover of "Twist & Shout" that Bruce provided during the encore was, in fact, longer than the Isley Brothers' entire career.  Though some of these tracks are pretty rare, I couldn't help but notice that some of the deeper cuts (Thundercrack, Darlington County and Candy's Room) also showed up during the 2007 Toronto show, thus making me one of a relatively small group of E Street fans who've seen "Thundercrack" performed live TWICE in the 21st century.  Also, I'm not sure "Rosalita" really counts as a sign request --- that's not exactly a rarity that the band will be stumped to remember.  Still, nothing beats the random nature of Springsteen setlists.  One of the highlights of the night was the momentary gulp/gasp/cheer of the fans when "Spirit In The Night" started up, as everyone simultaneously seemed have a "holy crow, they're playing this?!" reaction.  It was that kind of evening.