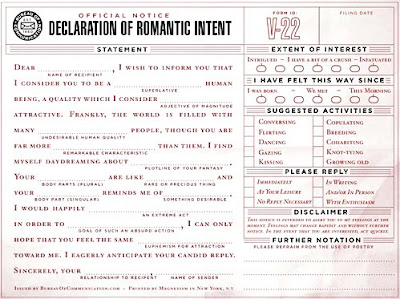 I wrote about this a few years ago, but probably my most notable Valentine's Day moment occurred when I was five years old and a kindergarten classmate gave me eight separate V-Day cards. It was all very cute and funny....and it only just occurred to me that what might have happened is she'd brought too many cards for the class and had a bunch left over, so she just dumped the extras on my desk. So, in effect, rather than being her first childhood crush, I was instead rather a glorified wastebasket. What a depressing twist.

Needless to say, I prefer to believe that my original theory was true and that this classmate was just madly in love with me. If nothing else, I prefer to admire the fact that she had the guts to outright give someone eight Valentines. What a bold romantic gesture, especially at an age where kids are usually freaked out to even sit next to someone of the opposite gender on the bus. It's very true that few things are more attractive than confidence….well, unless you're a homeless guy. A friend recently told me that she was asked out by a homeless guy, which prompted two thoughts:

1. Man, that guy has some stones. "Hey baby, pay no mind to my shabby clothes, I KNOW I can show you a good time." Granted, actually saying this exact line in most tones of voice counts as sexual harassment, but still. I wonder if she would've said yes had it been the Handsome Homeless Guy from the Eaton Centre.

2. My friend unwittingly insulted him while trying to let him down gently. He specifically asked if she wanted to go sometime in the next couple of days, so her answer was, "Oh sorry, I'm really busy this week since I'm moving." A perfectly valid excuse in most cases….but for a homeless guy, it's a double slap in the face. Not only if she turning down the date, she's also highlighting the fact that she has not just one place to live, she has in fact ANOTHER place to live since her current abode is just not up to her high standards. #onepercentproblems

So yeah, that basically concludes "the obligatory half-assed Valentine's Day post." I thought about making some joke about Greg "The Hammer" Valentine and how it was fitting that old-school pro wrestlers were all ugly, tough-looking guys but geez, I'd even be boring myself with that topic. So instead I'll leave you with a lovely sentiment from Liz Lemon.

Posted by Question Mark at 1:51 AM