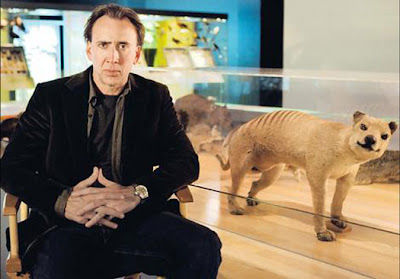 No, really, Nick Cage, YOU'RE the national treasure!

Who else would think these things on the way to a long-delayed dentist appointment? Or, who else would lose his shit on screen for the last 25 years, solely for our amusement? He is truly a man among hair-plugged men.

So for the second time in a little over a year, I find myself writing a post about Anne Hathaway being cast in a comic book movie, except unlike that 'Vulturess' nonsense, this one is actually happening. The news broke yesterday that Hathaway and Tom Hardy will play the villains in the upcoming Batman film --- Hardy is Bane, Hathaway is Selina Kyle. Now, interestingly, the news release specified Hathaway's role as just 'Selina Kyle,' not actually Catwoman, so it remains to be seen if Christopher Nolan is toning down the whole "cat-themed master thief in a costume" thing for his more realistic version of Batman, though Aaron Eckhart was cast just as 'Harvey Dent' in Dark Knight and we still got a proper Two-Face out of the deal.

Anyway, since I realize the film hinges entirely on my approval, thumbs up to the casting. I'm a well-established Hathaway fan, and it's very possible that Hardy steals the entire movie given Bane's potential as a character. You can go ahead and pencil these two in for supporting Oscar nominations come 2012 and hey, if they die, they might even win!

If you're Julius Caesar, which would you prefer to be named after you, a caesar salad, a caesar cocktail or a caesarean section?

I'd guess it's probably the salad. A Caesar cocktail is perhaps better known as a 'bloody Caesar,' which would no doubt bring back unpleasant memories for the ol' Roman dictator. And surely there's blood involved in a C-section....or wait, maybe there's not, if the doctor is doing it right. I really have no idea. I spent most of grade school health class passed out.

Now, fun fact, the caesar salad isn't actually named after Julius Caesar. It was allegedly invented by a San Diego restauranteur named Caesar Cardini, so I guess you could argue that it isn't a tribute to old orange Julius himself. Oh schisse, wait, is Orange Julius named after Julius Caesar?!?! Nope, never mind. All things being equal, he'd probably appreciate Shakespeare's play as the biggest existing tribute, once it was explained to him who Shakespeare was, and once Caesar got over his snobby 'well, Terence was better' attitude.

Speaking of ancient architecture, holy crap, Detroit. Will future North Americans regard the city in the same way that we look at Stonehenge? Will they think ancient Detroiters worshipped the octopus as a pagan god if they come across Red Wings memorabilia? Will 'Robocop' be considered a documentary?