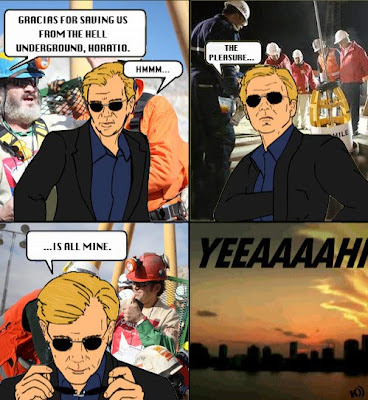 I don't see what the big deal is about this Chilean rescue mission. My Minesweeper scores are way higher than 33.

The Poke is sort of like a British, poor man's version of The Onion, which is why their recent story about a version of Monopoly based on 'The Wire' was both half-assed and not that funny. It's also a bit depressing since frankly, an actual Wire Monopoly game would be bad-ass. I'd buy one. You and your friends would have a board set up at each person's house, and you'd all play individually while sending your moves to each other via pager messages. If someone tried to cheat on their own board, they're given a Scott Templeton penalty. (Unless they have a Maury Levy card that allows them to do whatever they want.) In addition to the regular cash, you could also have cheques to be passed around, but only on the circumstance that they be signed with a clowny-ass signature.

Man, the more I think about this, the better it sounds. I'm actually upset that this isn't an actual game. Lance Reddick is pissed too --- he wants those royalty cheques! 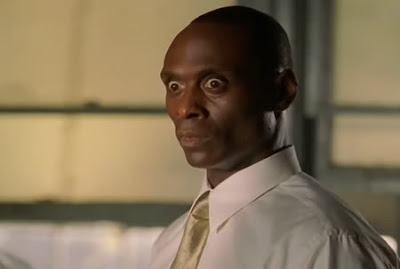 'The Town' was a decent enough action thriller, around the 6-out-of-10 range. But I can't help wonder if I would've enjoyed it more if.... (SPOILER ALERT!)

* ...Ben Affleck hadn't been the lead actor. I actually have high hopes for Affleck the director. Between this film and Gone Baby Gone, he already has a better directing resume than Jodie Foster, Warren Beatty and Kevin Costner combined. (Yeah, that's right, Costner. More like 'Dances With Boredom,' amirite? *holds up hand for a high-five that never comes*) But as we all know, Affleck the actor has his limitations. In spite of growing up in Boston, Affleck's Bawsten accent is so put-upon that it makes him sound like he's doing a half-assed Adam Sandler impression. I also have to throw a penalty flag on Affleck co-writing, directing and then starring in a project where he gets sex scenes with both Rebecca Hall and Blake Lively. I mean, Woody Allen has been making movies for years where he scores with women way out of his league, but at least Woody never included a scene where he's shirtless and doing reps on a chin-up bar. Show a bit of humility, Affleck.

* ...Affleck's character has been even somewhat likable. The film was working hard to at least explain, if not justify, the gang's crimes by showing their crappy childhoods, dangerous neighbourhood, the Florist's influence, etc. But that doesn't really make up for the fact that all four of the bank robbers are total reprobates. Affleck, the alleged nice guy of the bunch, still carries on a relationship with his hostage victim after the fact and apparently has no problem with blowing away cops, security guards, or whomever gets between them and a clean getaway. Putting up the cash for a skating rink doesn't wash away multiple first-degree murders.

* ...Rebecca Hall's character hadn't been so pathetic. So let me get this straight: she's taken hostage during a bank robbery, blindfolded, and left by the side of a river where she took the "longest walk of her life." She is clearly traumatized by the event, even to the point of quitting her job at the bank. Her only solace is the nice construction worker she just started dating. They have, like, four dates and he buys her a pretty necklace and then she finds out HE WAS ONE OF THE BANK ROBBERS. While upset, she decides that those four dates were pretty special and gives him the heads-up about the cops staking out her apartment. Are you fucking serious? In what world is Hall not scarred for life and either a) shuts down completely or b) devotes herself to doing everything in her power to having this guy arrested and/or shot? The slam-dunk ending for this movie was, I figured, Hall somehow setting up Affleck to be captured by police and thus getting her revenge. But, nope, she seems pleased that he gets away. Just ridiculous. Those must've been four pretty damn romantic dates. They slept together too, so presumably Affleck's character was just such a stud that it makes theoretically reasonable women think "Well, on the one hand he did kidnap me in the most life-alteringly terrifying morning of my life. But on the other hand, he was a good lay. Aww, let's let hiim go!" Again, humility is apparently an alien concept for Ben Affleck.

* ....the cops were played by actors other than Jon Hamm and Titus Welliver. So not only are the crooks degenerates, you're now asking me to root against a TV dream team of Don Draper and the Smoke Monster? Yeah right. This is another instance of how 'The Town' overrates the empathy the audience feels for Affleck and his crew. Are we not supposed to like Welliver's character since (gasp!) he grew up in Charlestown himself and now has 'sold out' by busting his old neighbourhood mates? Is Hamm suddenly the villain because he treats witnesses, namely Rebecca Hall, rather brusquely? Actually, given that Hamm initially thought she was in on the robbery and she ended up helping Affleck in the end, it looks like Hamm's police work was bang-on. If nothing else comes from this film, at least hopefully it'll get the ball rolling on a spinoff cop drama starring Hamm and Welliver --- though not as their Town characters, but just as Draper and the Man In Black. The show can be called 'Drinking And Smoking.'

But yeah, these criticisms aside, good movie (?)

Facebook question! You know the 'Photo Memories' box or the "so-and-so is tagged in a picture" item that appears on the right side of your screen? Why are all of these pictures from the same six or seven people? It's very peculiar. Even odder is the fact that these people aren't randomly selected, they all seem to come in sets of two like Noah's Ark. Two are brother and sister, two are a couple and two are best friends. The one stand-alone has no connection to the other six and wouldn't be notable at all other than the fact that she's one of the more attractive members of my Friends list.

Speaking of Facebook, here's a Social Networked trailer for Between Two Ferns! They couldn't find a way to work in a shot of that chick in the Stanford underwear? (On the bright side, no shots of Bradley Cooper in Stanford underwear.)

Your Horatio comic reminds me of this awesome video I just watched, of Rob Zombie 'commenting' on Caruso's acting abilities via CSI Miami: