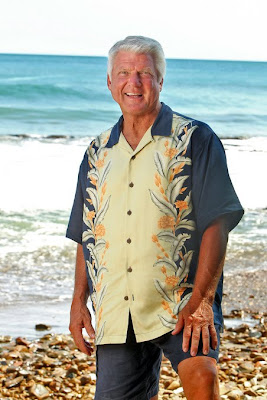 After coming close two years ago, Jimmy Johnson is now a full-fledged Survivor cast member for the upcoming Nicaragua season. That's right, the same Jimmy Johnson who coached the Cowboys to two Super Bowls, the Hurricanes to an NCAA title, and the Dolphins to.....uh, well, anyway, the Cowboys and Hurricanes.

I cracked jokes about Johnson on Survivor in my previous post, but now that he's actually a cast member, this begs a closer evaluation. First of all, he's now easily the biggest celebrity that's even come onto the show. Forget about Gary Hogeboom or Ashley the pro wrestler...Johnson is a legit big name in the sports world and is still widely visible from co-hosting the FOX NFL pregame show every Sunday. To put it this way, your mom probably knows who Jimmy Johnson is, or could recognize him if shown a picture of the man.

Johnson's celebrity brings an interesting dynamic to the cast. Hogeboom, you might recall, was so worried that the other players might use his NFL past against him in a "he's already rich, so let's vote him out" that he made up a fake name and background for himself. But Hogeboom was a pretty obscure player who'd retired 20 years earlier; Johnson, as I noted, is on TV every week either hosting pre-game shows or doing commercials. There's no hiding his fame. I'm not quite sure how this is going to effect him on Survivor since it's possible that he might get some votes against him due to the 'already rich and famous' logic, but it's equally possible that he might be kept along to the end simply because his pre-existing wealth makes him a good opponent in a final vote. The logic goes from "vote him out because Jimmy is already rich" to "vote for me because Jimmy is already rich." The danger of doing this in Johnson's case, however, is that you'd be going to the final vote against a man who has made a living making inspiring speeches, motivating people and reading human behaviour. It remains to be seen how Jimmy will do in the actual game of Survivor itself, of course, but based on his charisma alone, he seems like a dangerous guy to play an end-game with. Plus, Johnson isn't just a random celebrity casting choice --- he's an actual big Survivor fan who's been chomping at the bit for years to be on the show. Combine charisma with game awareness, and that's a good combination of skills.

The other factor in Johnson being on Survivor is his age (67), but given that this year's theme is Young vs. Old. One tribe is made up of people under 30, and the other is made up of people over 40. Jimmy is still the oldest guy out there, but only by four years. This new wrinkle somewhat cuts down on the usual Survivor strategy of eliminating the oldest and 'weakest' players first to keep the overall tribe strong. All Johnson has to do is outwork and outhustle at least a couple of others on his tribe and he'll prove his worth, so to speak, around camp.

Will he win? Probably not. I state this with the confidence of knowing that there's a 19-in-20 chance I'll be right, but even if Johnson marshals his coaching skills to take on a leadership role in his tribe, those guys always get the boot pretty soon anyways. I don't see him as a winner. Then again, as I noticed while testing my highly-unscientific method of trying to pick a winner based on the CBS contestant bios, a disturbing number of contestants have Russell Hantz as their 'Survivor I'm most like.' Jimmy could waltz to the million dollars if he ends up at a final tribal council against one or two Russell acolytes. If I had to pull a winner out of thin air, I'll go with Yve Rojas. Her 'Survivor I'm most like' was an intriguing combo of Danni Boatwright and Bob Crowley, and one of her hobbies is 'catching the last movie of the day,' which I do all the time myself. Dumb reasons for picking her as a winner? Probably. And they're about to get even dumber, since it should also be noted that this 41-year-old woman looks pretty fantastic. If it comes down to a challenge based on fitness in a bikini, Johnson is in big trouble.
Posted by Question Mark at 7:02 PM