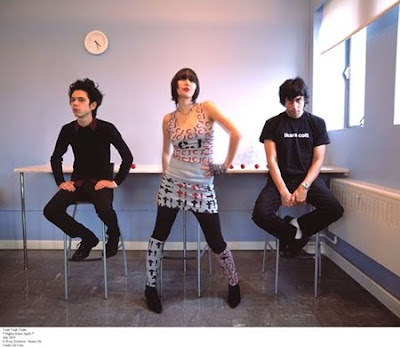 As you all know, I really enjoy "discovering" established bands and then delving headlong into their discography. My latest 'find' are the Yeah Yeah Yeahs, which came about for a number of reasons. First off, 'Zero' is arguably my favourite song of the year. The YYYs rocked it out on SNL last spring, and hearing it again on the radio while driving down Queens Quay on a rainy August night really brought it alive for me. (If this was Twitter, the previous sentence would have a #lameattemptatsettingthemood tag on it.) Secondly, and this one is a bit stranger, 'Maps' has become my signature song on Rock Band. There are very few tunes that I can perform reasonably well given my Johnny Cash-meets-Eddie Vedder-meets-someone who can't sing voice, but for some reason, 'Maps' falls right in my ballpark. Maybe it's because MAP is also my initials, so I'm just presuming the song is about me on a subconscious level. If I'm ever asked to give a live show of every music video game song I know, it'll be Maps, followed by 'Song 2' and 'Feel Good Inc.' off of Singstar (apparently I sound like Damon Albarn?) and then a rocking rendition of Matthew Sweet's "Girlfriend" from Guitar Hero. And that'll be it. A four-song concert. Still less of a ripoff than a Guns n'Roses ticket.

But anyway, the Yeah Yeah Yeahs. All of those factors coalesced at the same time, thus causing me to buy their latest record "It's Blitz," which is my album of the year thus far. Let's face it, given how little new music I listen to anymore, it'll probably end up taking the prize for 2009 if Kyle, Misha and I decide to do another massive list of our annual favourite records. I's B is a terrific blend of guitar and synth rock, powered by Karen O's one-of-a-kind voice. The YYYs aren't going to blow anyone away with their lyrics, but their songs are almost like pop music's answer to tribal chants. They're repetitive, but good repetitive, and the songs have enough hooks to stay fresh and also know not to wear out their welcome. I's B is the Yeah Yeah Yeah's third record, and it's a great sign that their albums are becoming both better and more interesting over time, rather than staying within one style or (even worse) trying to change just for the sake of being different or weird, a.k.a. Radioheading.

Funny story: I bought It's Blitz, loved it, and then decided to check out Ticketmaster to see if the YYYs were coming to Toronto anytime soon. Turns out I missed them at the Warehouse by literally two days. Ouch. Instead I had to go see the Snipes. BOOOOO. (In all seriousness, yayyyy. My pal Aron is in the band and I didn't have to lie and say that they were good in an attempt to save his feelings since they really were good. Genuinely good, not just 'good for a band that my mate is in' good. My only criticism is their lack of songs about Wesley Snipes.)
Posted by Question Mark at 3:11 PM

Mark - you ought to check out this band called Ketch Harbour Wolves. Their album - Dead Calm Horizon - is available for free, and, if it means anything I passed it on to Wasko and he really liked it.

I feel like it'd be right up your alley... again, it's free.

I love doing that as well -- especially as I usually wind up getting more obsessed with the band than existing fans I know.

Also, I HATE it when it occurs to me to check when a band is coming nearby only to find out that I just missed them. I once had that happen where the band was playing in Windsor at the exact moment I looked up when they'd be coming here.