Maybe The Worst Picture Ever Taken 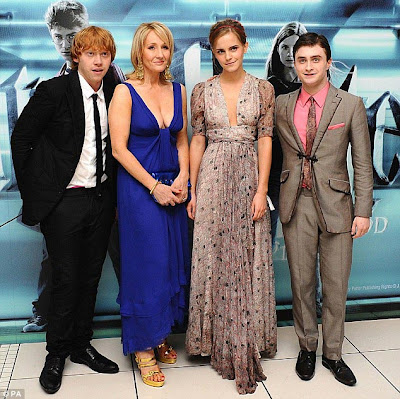 If you're a publicity rep from Warner Brothers, you should be fired for not putting a full Nike-on-Lebron-being-dunked-on-footage press on horrible shots like this pic of the Harry Potter crew from their recent London premiere. Just a sad effort all around.

First, you have Rupert Grint looking like he just came off a three-week bender capped off by a Reservoir Dogs-themed costume party. I've long observed that Grint seems to be aging at a superhuman rate; he passed puberty throughly halfway through the first Harry Potter film, zoomed into his twenties around the Prisoner Of Azkaban and is now mentally preparing himself for his first prostate exam. By the time they get around to making the eighth Potter movie, he might be dead of old age. Then the role of Ron will be filled by, ironically, Michael Gambon. Grint looks less like a teenage film star than he does J.K. Rowling's half-soused, ginger fraternal twin.

J.K. herself comes off the best in the photo just by the dint of looking like a normal person rather than a walking stylistic nightmare. Under normal circumstances, her borderline-sour facial expression and....what's a nice, PC way of saying this....a bit of middle-aged sag, if you get my drift. Rowling would've been better served by wearing a more supportive bra rather than just pointing a wand at her chest and yelling 'Petrificus Totalus!'

While Rowling dressed in modern ware, Emma Watson seems to have broken into her family tomb and stolen the dress that her great-grandmother was buried in. A certain friend of mine (I don't want to name names*) has been waiting for Watson to turn 19 for years now so he could publicly ogle her without coming across as creepy, but sadly for him, Watson's age doesn't negate the fact that she still looks like she's 12 at all times.

* = normally I would name names, except his name isn't unique enough to stand out. For example, I would've just written "A certain friend of mine, I don't want to name names LASZLO" had his name been Laszlo, and thus everyone would've had a good laugh at Laszlo's expense. But in this case, he has a name a helluva a lot more common than Laszlo, so the joke would fall a bit flat since y'all wouldn't identify who he was. And I'd rather not use a full name in context, since otherwise a future prospective employer might one day come across this post via Google search and be all, "What? Laszlo was ogling an adolescent girl? What a pervert! We don't want to hire people like that here at Arby's!" Then he'll go and dump another batch of Grade-J meat on the fryer, which kind of muddles his moral superiority. I'm getting off-track.

And then, finally, there's Daniel Radcliffe. Holy lord, where to begin. The Pee Wee Herman suit? The pink shirt? The poorly-attached microphone clipping his jacket together in a fashion that makes him look like a slowly-expanding balloon? The vacant expression on his face? His pale (even by British standards) skin? His kid-in-a-fourth grade-class-photo haircut? It seems fitting that Bonnie Wright's mortified face is framed right behind him, as she probably had that same expression upon learning that this foolishly-dressed yutz was her love interest. Radcliffe should've taken a hint from his co-star, The Great Alan Rickman. Look at this music video. Rickman is wearing a pink shirt, pink tie, is in a video for an adult-contemporary pop song, and even dances at a gas station, yet still looks like a total bad-ass. I realize that living up to Rickman's consistently awesome standard is difficult, but c'mon Radcliffe, you've spent most of the last decade acting alongside this man. Pick up a style tip or two, lad.

Pictures like this make me wish that the moving photographs from the Harry Potter books actually existed. Then these four could walk out of frame and change their clothes.
Posted by Question Mark at 3:05 PM