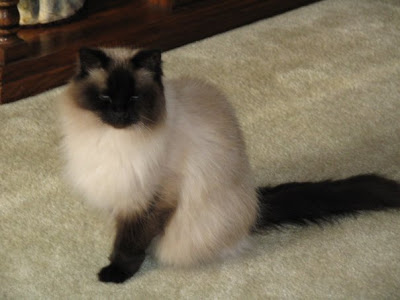 We didn't choose Bailey as much as he chose us. In the fall of 1993, my mother, brother and I were in the living room of a Wortley Village family who had a bunch of Himalayan kittens they were trying to sell. As soon as we sat down on the couch, one kitten immediately jumped up next to us. He didn't immediately start rubbing up against us or anything ostentatious; just a few careful sniffs, friendly without being overbearing, basically classic cat behaviour. We immediately took a liking to this one little kitten who was brave enough to investigate on behalf of his brothers and sisters, and arranged to purchase our family's first major pet.

(I say 'major' with all due respect to Tom & Jerry, my goldfish at age five who ended up dead after we left them in the care of a clumsy neighbour while we were on vacation for a week. And let's not forget Michelangelo I and Michelangelo II, our back-to-back turtles that we were pretty lazy about naming, now that I think about it. Turtles were an overall pretty lazy pet choice anyway, given that virtually every kid in the late 80's/early 90's had a pet turtle named after one of the Ninja Turtles, but c'est la vie.)

So a week or so into October 1993, our cat was brought home....except it wasn't our cat. The sellers "accidentally" gave us the wrong kitten, a female one, that was as skittish as all get out. It was my mother who realized the "error" after a couple of days when she was combing him/her/it and discovered that her allegedly male cat had no penis. The sellers apologized for the "mistake" and gave us the real kitten that had first won our hearts that first afternoon, and I couldn't possibly use any more quotation marks to show how full of horseshit I found this half-assed attempt at a bait-and-switch.

But lo and behold, we had our cat, and since it was October anyway, he officially went into the books as my birthday present. It was also exactly when the Blue Jays were in the midst of winning the 1993 World Series, which is why I suggested 'Carter' as a potential name for our new cat. (Also contenders: Kramer and George.) But in the end, we went with Bailey. A classic cat name that was part in tribute to the cat owned by our old family friend Doris. Kramer had some traction, but I believe my dad pointed out that we should hold off on the name in case Michael Richards ended up getting in hot water over racially-charged comments at a comedy club over a decade later. Prescient man, my father.

So that was the beginning of the Bailey experience. It didn't take long for him to establish himself as the majordomo of our house. When our dog joined the household the next year, he decided to see exactly what this other furrball running around the house was. He bent over to give Bailey a sniff, and Bailey responded by sitting up on his hind legs and bopping him in the nose twice with his (thankfully recently declawed) paws. For years afterwards, my dog made it a point to give Bailey a wide berth. He knew the score.

In addition to being a fantastic athlete, capable of jumping with reckless abandon in pursuit of a toy on a string and tearing through our house at speeds of approximately 60 mph, Bailey also was one of those rare talking cats. Sure, he could meow, but his primary noise was a little sharp noise, almost like a chirp, that literally sounded as if he was saying 'cat.' He couldn't quite master his given name, but at least he knew what he was, which is more than can be said for many of us.

Great moments in Bailey's history include: the time he fell into a bathtub; the time he catted up (their version of manned up) and killed a mouse in our basement; his incredible ability to achieve close to a worm-like closeness to the ground on the rare occasions he ever went outside; the time he showed off his rarely seen hiss-and-sprint mode when confronted by my cousins' dog; his instinctive run to the front door whenever one of us was watching a TV show where a character rang a doorbell; how his combed-off fur has been responsible for the creation of 80 percent of the birds' nests in the greater Byron area over the last 16 years; his weeklong stint of depression hiding under my parents' bed after he got neutered; any time he would lick a spoon with just the tiniest hint of ice cream on it and would spend the next 30 minutes licking his lips; and, finally, the 'Bailey bop' (a half-walk, half-run amble that he would employ when called, or more accurately, when he was called for a tuna treat).

In spite of his advanced age, it was still a surprise to see him so out of sorts two weeks ago, staying in one place, barely eating and acting very much out of sorts. The vet said that kidney failure in older cats was very common and could come suddenly, and once it came, there was little that could be done. I happened to be back in London last week to take him to a couple of vet appointments while my folks were out of town, so I got to say my goodbyes to my little friend before I came back to Toronto, just in case the treatments didn't provide the miracle turn-around that we were hoping for.

Today Bailey was taken into the vet to be put out of his pain, and though I'm no theologian, I know exactly where he is right now. He's recreating one of his favourite poses from my parents' front living room. Bailey is sitting in front of a window, crouched on his stomach, bathed in a ray of sunlight, and looking outside while jerking his head in the direction of the slightest bird call. If anyone bothers him, well, they'll be dealing with a paw to the nose.
Posted by Question Mark at 7:57 PM

Sorry from both us over here, buddy.

But that was a lovely tribute...