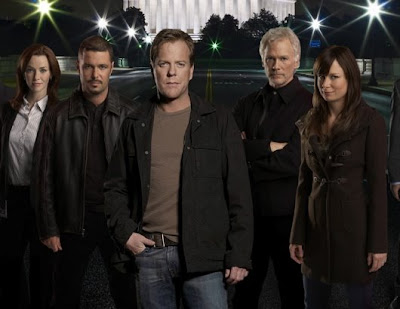 I'm holding back a bit on my praise of the first four 24 episodes of the season, since I remember the two-night premiere of S6 as being pretty good too, before that season degenerated into a pile of garbage. (You'll notice how things went south after Kal Penn was killed off? Kumar = ratings.) But given that this new season premiere had to both erase the stink of Season Six and build on the mediocre 24: Redemption movie from two months ago, I'd say that things are looking up for the 24 franchise. S7's first four hours had some great action, some interesting plot developments and, most importantly, none of the characters appear to suck yet. You might think this would be a small hurdle to overcome, but given this show's propensity for stubbing its toe on casting decisions, it's a bit of a relief.

Case in point: in past years, the traditional 24 time-wasting subplot has featured the likes of Elisha "Sloppy Seconds" Cuthbert and Rick Schroeder. This season, however, it looks like Colm Feore will be doing the honours, and given how he has more acting talent in his left eyebrow than Cuthbert and Schreoder do in their entire bodies, it made First Husband Taylor's quest to find the truth behind his son's death into a plot I'm actually interested in seeing develop. And hey, it also gives screen-time to the very hot Carly Pope from 'Young People Fucking,' so thumbs up.

Feore's presence is one of those details that gives me hope that the 24 producers really did learn their lesson from S6, as the show's makers have readily admitted that the show needed to be freshened up. So now the show is set in Washington, and at least in the first four episodes, 24 has gone back to its roots of having Jack, Tony, Chloe and Bill as a central unit trying to battle both a set of villains and some good guys who are temporarily on the wrong track (the FBI agents). Part of me is upset that the much-hyped twist of Tony as a villain was apparently proven to be false just two hours in, but let's be honest: nobody wants to see Jack and Tony fight. They're like brothers, man. Tony's already had a rough year what with the Cubs being upset in the MLB playoffs, so the last thing he needs is an ass-kicking from Jack as well. There's also the chance that the Bill/Chloe/Tony team are actually villains (which would be the kind of epic twist that this show is known for), but honestly, maybe it's better that Jack at least has a few stable allies still going after seven seasons. Plus, if Chloe is evil, that would ruin my long-standing wish to have the series end with Jack and Chloe hooking up. Mary Lynn Rajskub has stated that she plays Chloe as if she's in love with Jack, but I don't think we've ever seen it portrayed as baldly as the hilarious scene where she compliments him for looking good on C-SPAN.* Between that and Jack casually apologizing to Tony for almost breaking his neck, it was a laugh-filled two hours on Monday night...well, maybe just those two moments in two hours, but still. Actually, the thing I laughed the most at was probably the random West Wing shout-out --- Tanner the sniper's lawyers from Gage Whitney Pace, the law firm that Sam Seaborn was working for before he joined the Bartlet White House. Does this mean that 24 is part of the West Wing-verse? Is President Taylor going to lose her re-election campaign to Jed Bartlet? I guess we'll know for sure if Taylor ever addresses this threat in Sangala by saying "African warlords...boy, I don't know."

* = Okay, I guess there's the small detail of Chloe apparently still married to Morris, but perhaps a later episode will reveal that Morris left her in order to star on half of CBC's lineup. Carlo Rota has a truly interesting acting resume. I'm also impressed that 24 went with another CBC star by casting Mary Walsh to play the presid....what's that? Cherry Jones? Seriously? Never mind.

I look forward to Chloe meeting the FBI's Bizarro Chloe, Janeane Garofalo. The FBI already seems to have Bizarro Jack (Renee, who's gone from rules stickler to terrorist-chokin' torturer in the span of four hours), Bizarro Ryan Chappelle (Agent Moss, or 'Moss The Boss') and Bizarro Milo (the other snarky techie guy, and it only just occurred to me now that it's the same guy played Billy the douchebag director on Entourage, a.k.a. the most obnoxious character on a show filled with obnoxious characters). I look forward to the FBI team totally devolving into devoted Followers Of Bauer over the next 20 hours. Renee is on board already, and Janeane Garofalo can probably be coerced into being a FOB if she's not the mole.

Bottom line: 24 seems to have gotten its mojo working again, so I think I can temporarily call off any ideas I had of dropping it from my watch-list. Jack had me at the moment he was threatening to stab the arms dealer in the eye with a pen. Sure, it was half-Joker's pencil trick and half-the ending of the famous Magnum TA vs. Tully Blanchard cage I Quit match from Starrcade '85, and it isn't up there with such classic Jack tactics as shooting a guy and cutting off his head, but still, it was enough to tell me that 24 was back.

Here's a fun game to play some time....how much time has passed in the 24 universe? The show is in its seventh season and seventh 'day,' but if you think about it, it's actually been much longer than a mere seven years in show-time.

The easiest way to mark time is by the presidents. David Palmer was running in the California primary in S1, so just to make things easier to follow timeline-wise, pretend Day One took place in 2000. So Palmer is elected in 2000, and we know he only served one term as per his pledge in the S3 finale.

2004-2006?: President John Keeler
This was the guy Palmer was preparing to debate on Day 3, the Republican senator played by Geoff Pierson. Can you imagine the uproar that would take place in real life if a sitting president decided so late in an election cycle that he was suddenly ending his campaign? What would the backup scenario even be in that case? Would the vice-president (Prescott) have stepped in? Talk about handing Keeler an easy win. But, Keeler's luck wouldn't last long, as he was killed when Habib Marwan (for my money, the most legitimately successful villain in 24 history) bombed Air Force One. I'm not totally sure of when Keeler bit it, but I'm guessing around 2007 based on logic you'll see in the Logan entry.

2006-2007: President Charles Logan
I'm basing this solely on a comment made during S5 that the election was 'a year and a half away,' which partially fueled Logan's desire to have the terrorist threat neutralized quickly so he could claim it as a personal victory for himself. Marwan, by the way, was the most successful villain in 24 history, but I'd call Logan the best villain in 24 history, narrowly edging out Nina and Sherry Palmer. Gregory Itzin, by the way, lost the supporting actor Emmy that year to fucking Alan Alda for his glorified cameos on West Wing. Emmys = angry Mark.

2007-2008: President Hal Gardner
Played by Ray "Satan" Wise in a classic 24 bait-and-switch of casting an actor known for playing mostly villains as a good guy. Gardner presumably took over as president once Logan was arrested, and frankly, I would've loved to have seen exactly how Logan's crimes were explained to the American public. His reappearance in S6 was shocking to me solely because I would've suspected that for his monstrous laundry list of crimes, Logan would've been executed more or less on the spot. Or, perhaps with an eye towards protecting the American public, Logan would've "died" in captivity, perhaps

2008-2009: President Wayne Palmer
Played in career-ending fashion by D.B. Woodside. I dunno what happened to ol' D.B. He did good work on Buffy, and did good work as Wayne in the third and fifth seasons. But much like the show itself, Wayne Palmer just totally went to shit on Day Six. His acting became even more insufferable after the attempt on Wayne's life --- Woodside delivered most of his lines in an agonizingly slow...and...ponderous....manner. He sounded like Mike Scioscia after he got radiation poisoning on the Simpsons. I'm guessing that S6 came early in Wayne's administration, given how it was hammered into our heads that Jack had spent 20 months in Chinese captivity in between Days Five and Six, so it's possible that Wayne's presidency lasted barely longer than William Henry Harrison's.

2012-present: President Allison Taylor
And now that brings us up to the current day, since the 24: Redemption film told us that Taylor defeated Daniels in an election and that Jack had been traveling around the world for 'a couple of years.' So it's actually been 12 years since the fateful events of Day One. Now, the show's writers have always been careful to not actually mention a lot of dates or real-life events, as they've stated several times that 24 is in 'the perpetual now' and they don't want to break that illusion by having Jack, for instance, celebrate his 50th birthday or anything.

Also of note in this listing of presidents --- the Palmers and Daniels were Democrats, and Keeler/Logan/Gardner/Taylor are all Republicans. So even though 24 is often criticized for taking a very Bush-esque view of torture, habeas corpus, etc., it's interesting that the most heroic president (Palmer) was a lefty and the giant slimeball criminal president (Logan) was a Republican.
Posted by Question Mark at 4:28 AM

Further confusing things: did you catch that, in ep 7.1, Jack asked that they pull a file on the forger from 1999, then later, in the car with Agent Walker, Jack mentioned that he and Tony had flipped him and used him as a supplier. Now, while I'm open to the possibility that 1999 was the first time they'd come across this guy (Scheter, I believe) and that they didn't flip him for a couple of years, this raises a potential issue that they may or may not be trying to retcon out of existence, mainly: Tony and Jack, by all accounts, hated each other in 1999, in that they were both pining (pining means "nailing," right?) Nina Meyers.

(Note: this might be further support for the showrunners backdating S1 to '97 or so, since, if that's the case, by '99, Jack and Tony may have patched things up. Or, much more likely: the showrunners don't care at all about how wacky the timeline looks.)

Anyway, really impressed with eps 1 and 2--aiming to watch 3 and 4 tonight.