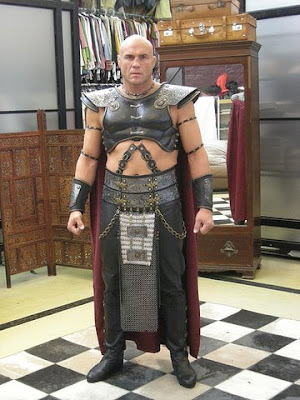 Dana White is apparently a big fan of the Lost episode "Not In Portland." UFC 91 was originally scheduled to be held in Portland's Rose Garden, but when the big Couture vs. Lesnar match was signed, the event was moved to Las Vegas. White's logic was that Vegas has a better infrastructure for major events like this --- more hotels, more party areas, etc. I can see White's point, but c'mon, Portland got hosed. If I'm an Oregonian, the next time the UFC comes to my state with some lower-tier card, I'm staying at home to watch on TV. Then again, I stay home to watch everything on TV. And I don't even live in Oregon, though I did consider becoming an Oregon Ducks fan during my brief flirtation with picking a favourite college football team.

* Gabriel Gonzaga over Josh Hendricks, R1, TKO
Gonzaga might be fighting for his UFC life, given that he's lost two of his last three fights and Dana White seems to be in a fat-trimming mode in the HW division. Fabricio Werdum was released earlier this week, though in Werdum's case, that may have something to do with the fact that he just signed a big new contract and was then promptly knocked into next week at UFC 90. One would think the younger, cheaper, more-upside Gonzaga might stick around for a bit longer, but who knows. Anyway, John Stockton's favourite fighter should get the win over the unknown Hendricks. If Josh Hendricks is related to Mad Men's Christina Hendricks, then all bets are off --- who wouldn't want her at ringside supporting her brother/cousin/whatever for future fights?

* Amir Sadollah over Nick Catone, R2, armbar
Sadollah is an odd case. He's obviously talented, but he's so green that the UFC has to be very careful about who they pick to face their TUF winner. In this case, the choice is apparently Nick "No, I'm Not In A Boy Band, Why Do You Ask?" Catone. I would suspect this guy is a total can, so Sadollah takes it with his patented Dollway-bustin' armbar.

* Demian Maia over Nate Quarry, R2, some kind of submission
This one is the classic striker vs. submission expert battle. Maia is unbeaten in his career, and Quarry is unbeaten (2-0) since returning from major back surgery. Quarry will get a better fight from Maia than he did from Kalib Starnes last April, when Starnes literally ran away from Quarry for the entire match; just in case you were trusting my judgement with these picks, remember that I picked Starnes to win that fight. Oops. Anyway, this should be a pretty solid bout given that Maia isn't great on his feet and Quarry has never been submitted in his career, but I'd still favour Maia to end up figuring out a way to get Quarry to tap.

* Kenny Florian over Joe Stevenson, decision
Poor Kenny Florian has had to put up with some bullshit. He's been as hot as any fighter in the company, winning his last five fights, and yet his well-deserved LW title shot has been forever delayed like a Manic Street Preachers greatest hits album. The problem is that BJ Penn, who doesn't like to fight often anyway, is already booked to fight Georges St. Pierre on Jan. 31, so even though Florian is already the clear #1 contender to the lightweight title, he decided to take this very tough fight against Stevenson in the interim rather than sit out for 9-10 months while Penn clears his schedule. Ironically, if Penn beats GSP and becomes the welterweight champ, then #1 WW contender Thiago Alves is the one who'll be on the shelf for a while since Penn will have to defend his LW crown against Florian first. And now you see why Dana White doesn't like to skip between divisions. I would expect Florian to eke out a tough decision over Stevenson, and then hope that Penn beats St. Pierre and decides to vacate the LW title so Florian can fight someone else (Gray Maynard?) for the vacant belt. If Joe Daddy wins, he would probably face Sean Sherk in a 'Victims of BJ' eliminator bout.

* Randy Couture over Brock Lesnar, R2, submission
This one took some thinking. It's one of those fights were, on paper, there are actually two schools of conventional wisdom. The casual fan might think, "Good lord, Brock's a beast, he'll overwhelm old man Couture with his power and just grind him out." Or, another casual fan might think, "Randy Couture, the cagey veteran to end all cagey veterans, is fighting a guy with just three pro fights, so Randy can surely use his superior knowledge of MMA to overcome Brock's athletic prowess." I'd be more inclined to go with the latter school of thought for the following reasons.

First, Randy is arguably the best game-planner in the sport, and given that Randy is, shall we say, picky about who he fights, it's probable to think that he wouldn't have taken a fight against Lesnar if he didn't have some idea about how to beat him. Second, Brock is still quite raw. He got easily tapped by Frank Mir after Mir was able to weather Brock's initial storm, and in Brock's win over Heath Herring, he had Herring totally controlled and dominated for all three rounds but couldn't figure out a way to finish. Couture is obviously way better on the ground than the clueless Herring, so if Brock wrestles Randy down on Saturday, Lesnar will have to actually do something in order to avoid being submitted. Thirdly, the timing. Lesnar's last fight was in August. Couture's last fight was in August 2007. The longer layoff is probably a better thing for the middle-aged Couture, whereas the 'take Brock along slowly' strategy was thrown out the window and now he's facing the HW champion on three months' notice. I'm just not sure that Lesnar has the cardio to last five rounds at this point in his MMA career.

In the end, the reason I'm picking Couture is because Couture ultimately has more to lose. He's spent the last year squabbling over his contract, 'retiring' and exploring every possible avenue to get a fight with Fedor Emelianenko. Now, after coming back to the UFC with his tail semi-tucked between his legs, Couture knows that he'll have to win this HW title tournament if he wants any shot of making a Fedor fight both happen, and happen with any major fan interest. If Couture loses here, the UFC could book his next fight against another top opponent, and then another loss could get Couture cut and then suddenly the Fedor vs. Randy bout isn't very marketable. If Couture beats Lesnar and then beats the winner of the Nogueira/Mir fight for the HW title, then suddenly Couture is on top of the world and Dana White would see enough dollar signs to swallow his pride and bring in Fedor. If Lesnar loses, sure he loses a HW title opportunity, but that's just gravy at this point in his young career anyway. There's plenty of time to rehab himself.

So my prediction is that Randy gets a submission from the ground, or else he wins when Lesnar knocks himself out trying a shooting star press from the top of the cage. By the way, pray that neither Couture or Lesnar gets hurt in the next few days, since if their fight is canceled, this event goes in the running for Worst UFC PPV ever. It wouldn't even deserve to be held in Portland.
Posted by Question Mark at 4:43 PM