LISTAMANIA VII
The Top 13 Athletes Named Mark Of My Lifetime

Honourable mention I: guys named Marcus. The name on my birth certificate is actually just Mark --- no fancy version necessary, baby. This list is reserved just for those who are best-known by the shorter, cooler, harder, better, faster, stronger version of the name.

Honourable mention II: Mark Spitz, Mark Fidrych. These two were before my time, but get a nod due to their outstanding achievements in the field of excellence. Spitz, sadly, has been reduced to appearing in GoDaddy.com ads with Amanda Beard. Fidrych's awesomeness just continues on through the ages. For those unaware of the man known as the Bird, Fidrych had one amazing rookie season with the Detroit Tigers in 1976 and became a national sensation due to antics like talking to the ball on the mound. Fidrych had arm troubles that cut his career short, but he is fondly remembered to this day. Two Fidrych notes...

* There is a great anecdote about Graig Nettles, a character in his own right, coming up to the plate against Fidrych. As Fidrych was talking to the ball, Nettles told his bat to hit the ball over the wall. After striking out, Nettles complained, "Damn Japanese bat. It doesn't understand a word of English."

* Fidrych appeared on what is inarguably the greatest Sports Illustrated cover of all time. It's not even close. This image is now my laptop's background screen. 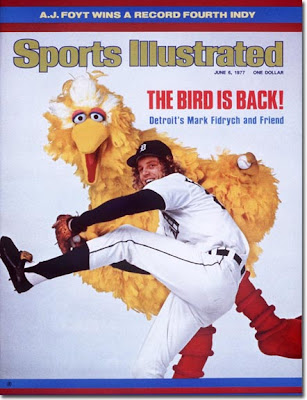 13. Mark Moseley
I have no earthly clue about anything Moseley has ever done on this earth except for this --- in 1982, he won the NFL's MVP award. And he was a kicker. A. Kicker. This is the league so prejudiced against this particular position that there aren't even any full-time kickers in its Hall of Fame. Now 1982 was a strike year, so there might've been some wackiness going on, but even still, that's just wacky.

12. Mark Tewksbury
I have no particular interest in Tewksbury other than general patriotism (gold medal! Whoo!), but I have to bow to public pressure on this one. I MSNed a few people asking them to name any sporting Marks they could immediately think of, just to see if there were any obvious names I was missing. To my surprise, all four of them immediately came up with Tewksbury. Hell, if he's stuck in the public mindset this long, he's earned himself a spot on the list. Besides Tewksbury and Spitz, I'm probably the third-best swimming Mark of all time. After all, I do have a PUC Lifesavers' badge. *dusts off hands triumphantly*

11. Mark Recchi
I'll be honest, I had a whole entry written up about how Mark Recchi was widely regarded as the ugliest player in the NHL before I realized that I was confusing Recchi with Mike Ricci. Recchi was just a boring ol' quality player with two Cup rings and over 500 career goals. Yawn. On the bright side, at least he got more puck bunny tail than Mike Ricci. Fuck, that guy was ugly. He looked like a leaking car battery that had somehow taken human form.

10. Mark Eichhorn
Being a member of the 1992-93 World Series champion Blue Jays teams is a great way to win oneself a place on this list. Eichhorn also had the mystique of being a sidearm pitcher. In my house league ballplaying days, I could never hit sidearmers. Well, I couldn't hit anyone, but I especially couldn't hit sidearmers. My career average against them was literally .000.

9. Mark Tauscher
Packers, baby! Aside from a couple of injury-plagued years, Tauscher has been a rock on the O-line for the decade. I wanted to get at least one Packer representative on this list, but my only other real option was Mark "Why yes, I am the oldest man in this hot tub" Chmura. Needless to say, the Tausch got the nod.

8. Mark Rypien
Remember, I didn't start really following football until 1992, so I came in just at the moment Rypien and the Redskins were kicking everyone's ass. If you had asked me who the greatest quarterback of all time was back then, I would've confidently stated Rypien, possibly while urinating on a picture of Joe Montana. I wonder if Rypien and Kurt Warner ever sit around and ask themselves what the hell happened to their careers.

7. Mark Calcavecchia
The man known as Calc (original nickname) has had a long and distinguished career on the PGA Tour, racking up double-digit wins and even a major. Yes, that's right, Calc won a major early in his career, the 1989 British Open. Winning a major early can either make a player crack under the pressure of being known as a major champion, or it can put them on easy street for the rest of their careers since they can be content with the fact that they've already achieved their career highlight. I think Calc can be put into the latter category. I've always believed that if you put every PGA Tour player into a steel cage and had them fight it out, Calcavecchia would be one of the last men standing. He just seems to have a subtle bad-ass quality to him. I think it would be Calc, Tiger (obviously, he's in by far the best shape of any golfer) and, for some reason, Shigeki Maruyama. His nickname is the Smiling Assassin, after all. He'd just stand in the corner, with bodies piled up around him, grinning like that little girl in Battle Royale. Fun fact: Calc's wife's maiden name is Nardecchia. I hope she didn't hyphenate.

6. Mark Prior
Sigh. The arm that sunk a thousand fantasy teams. Prior, in all honesty, shouldn't be this high on the list, but I see no reason to unfairly punish the man for Dusty Baker's stupidity in making him throw approximately 268 pitches per game. If you have any Cincinnati Red on your fantasy team this season, be afraid. There's no telling what this idiot may do. Drafted Joey Votto? Oh, well, Scott Hatteberg needs his at-bats, back to the minors with you, Joey! Thinking of picking up Jay Bruce? No need to play this minor league star! The Reds already have Corey Patterson and Norris Hopper! Dusty's satisfied! Did you pick up Aaron Harang? Wait...crap, I drafted Aaron Harang. Uh oh.

5. Mark O'Meara
A pretty similar to Calcavecchia's --- we Marks are nothing if not consistent --- except that O'Meara won one more major title. O'Meara is best known for his role as Tiger Woods' fishing buddy, which is somewhat insulting given MOM's status as a world-class golfer in his own right, yet somewhat apt given how everyone on Tour is caught up in Tiger's wake. I cannot believe that we are seriously discussing a pro golfer going unbeaten for an entire season. That would be probably the greatest feat in sports history. That would make the 72 Dolphins look like a pile of vomit. Man, have I spent two-thirds of O'Meara's entry talking about Tiger Woods? I told you he was unfairly diminished!

4. Mark Zupan
Zupan was a university college and soccer player whose life took a dark turn after he was rendered quadriplegic after a car accident at age 18. What did Zupan do? He forgave his drunk-driving friend who caused the accident, became a world-class wheelchair rugby player, starred in the wonderful documentary Murderball and, as seen in the film, got himself a super-hot girlfriend. Damn. Zupan is basically a real-life version of Joe Swanson from Family Guy, except without the police background. If you made fun of Zupan ("What are you gonna do, Chairy? Give me a knuckle sandwich? HAW HAW HAW!"), he would quietly smile to himself and then knock your mocking ass out. Then he'd deliver a line like "That knuckle sandwich was a meal on wheels." Then he's roll away to a personalized version of the Canyonero theme music. Mark Fuckin' Zupan, ladies and gentlemen.

3. Mark McGwire
A controversial choice due to performance-enhancing substances, but his distinguished body of work leaves me no choice but to give him a high ranking. This one was a real shame. I mean, we all sort of knew Big Mac was on steroids, but it was really disheartening to see him stammer his way through that congressional hearing. On the bright side, McGwire is still by far the most popular of the steroid-users. Barry Bonds? Roger Clemens? Rafael Palmeiro? Sammy Sosa? Jose Canseco? Pfft, I'd still high-five Big Mac over any of these guys. Being nicknamed after a hamburger goes a long way with me, which is why my current favourite ballplayer is Asdrubal "The Whopper" Cabrera.

2. Mark "The Undertaker" Callaway
A controversial choice due to performance-enhancing substances (his magical urn), but his distinguished body of work leaves me no choice but to give him a high ranking. You've got to love the Undertaker. Whether he's throwing Mick Foley off of a steel cage or locking the Ultimate Warrior in an airtight casket, he was always a barrel of laughs. I always thought that a big part of one's success in professional wrestling had to do with what gimmick you're handed, and this is definitely true in the Taker's case.

Vince McMahon: Ok Mark, I've got it narrowed down to two character options for you. One, you can be a monster who never shows pain, rarely loses, has a great gothic entrance and look that will make you popular no matter what, win several world titles, and get long paid vacations whenever we 'kill' your character for several months before bringing you back stronger than ever. Two, you can be Pants-Ripping Terry, a tailor-turned-wrestler who would dominate competition were it not for his achilles heel of freaking out whenever his opponent tears the hemline of his pants, which would happen in pretty much every match. Your catchphrase would be "Sew there!"

Mark Callaway: Would I be supplied with new pants every night?

Vince: No, you'd have to bring you own.

Mark: Aw man. In that case, I'll take the first gimmick. I only have so many pants to spare.

1. Mark Messier
As if there was any doubt. Not only does he share my first name, but he's also a bald Mark. Messier is also notable for being a master of unintentional comedy --- his bizarre commercials for Lays chips, his entire stint with the Vancouver Canucks and his increasingly hilarious reaction to being handed the Stanley Cup by Gary Bettman in 1994. Messier was almost hysterically happy, bordering on crazy. It was like when Sideshow Bob was elected mayor and he just broke into insane laughter during his victory speech. I half-expected Messier to press some secret button on the Cup and his henchmen would suddenly scale down on ropes from the ceiling of Madison Square Garden and take the whole building hostage. Messier would then put on a monocle and cape, and start stroking a cat (the cat played by Brian Leetch).
Posted by Question Mark at 12:34 AM

You may get some gried from the swimming enthusiasts (they do so exist!) for including Tewksbury and not Spitz, but I'm fine with it--mostly because (and this may be unfair) Spitz's then-world record times look downright pedestrian now.

The only omission I can think of Mark Aguirre--star basketball player for DePaul University, the Dallas Mavericks, and the Detroit Pistons. Detroit trading Adrian Dantley for Aguirre in '88 is probably what put them over the top.