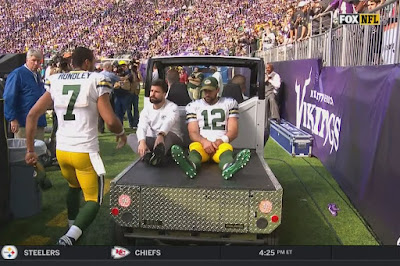 The Seahawks have no offense.  The Falcons seem pathologically incapable of holding a lead.  The Eagles (*checks records*) play in the city of Philadelphia, so they're under a sports curse.  The Cowboys seem to have used up every bit of luck they had in the 2016 season and now nothing is going right for them this year.  The Rams are the Rams.  The Lions are the Lions.  The Vikings are the Vikings.

In short, things were wide open for the Packers to finally make it back to the Super Bowl.  And, really, a win wasn't out of the question, given that the AFC's top teams are also full of questions in this weird parity-driven season.  Green Bay wasn't a perfect team by any stretch but they had the ace of spades himself, the P-Wing, the legend known as Aaron Rodgers.

Except now, Rodgers is likely out for the season due to a broken collarbone Green Bay is certainly done.  Oh, make no mistake, I would like nothing more than to see Brett Hundley inexplicably turn out to be awesome and Brady his way off the bench to lead the Pack the rest of the way.  The idea of The Packers somehow getting THREE fantastic quarterbacks all in a row over a 25+ year period would just be amazing, in no small part because it would absolutely infuriate their rivals.

Realistically, however, Hundley will struggle because a) he's basically a rookie QB despite this being his third season, b) the rest of the Packers team simply isn't very good.  Having an A+ quarterback papers over a lot of flaws, but without Rodgers as the rising tide, the several mediocre boats on the Green Bay roster have nowhere to sail.  Does Hundley have the ability to quickly make plays before the blah offensive line inevitably breaks down?  Can Aaron Jones keep up his eye-opening start now that defenses will be paying attention to him and not the QB?  Does Mike McCarthy have the coaching acumen to adjust to....well, we know the answer to that question already.  /deep sigh

It all adds up to another wasted season in Green Bay.  Rodgers turns 34 in December and the team really needs to start putting the pedal to the metal in terms of putting a deep roster around him before an inevitable decline sets in.  Even accounting for Rodgers being a freak of nature, the Packers have at most five seasons left with him at QB, and it would be a legitimate shame if they somehow ended the Rodgers era with just a single Super Bowl victory.  Too many years have already been thrown away thanks to injuries, McCarthy's incompetence, and terrible playoff losses.
Posted by Question Mark at 11:11 PM