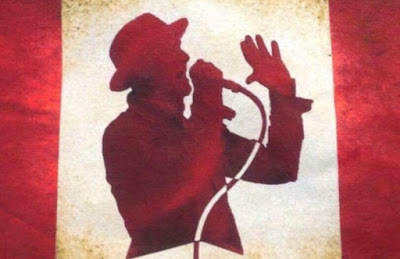 It was a rainy Sunday afternoon, both wet and humid enough to irritate the hundreds/thousand-plus people in attendance at the 2014 Field Trip festival since there is precious little tree cover at Fort York.  As much romance as there is in the idea of musical festivals being a muddy nirvana, you never want to actually experience it.  Still, the conditions didn't matter, since the main stage featured none other than the Sadies (a pretty big name in their own right) and Gord Downie, fronting the band for a tour to promote an album collaboration.

The cool thing about solo or side projects for members of major bands is that it usually makes them more accessible.  The Tragically Hip, of course, are probably too big for Field Trip; while they're a pretty old-school touring band that doesn't put on airs, their tours are more apt to take them to the ACC or Downsview whenever they're through Toronto.  (Realistically, the Hip could likely sell out a one-off Rogers Centre show if they wished.)  Downie the solo artist, however, was right there in the muck and the mire of Field Trip with all the other acts on the bill, like he was just another up-and-comer act or mid-tier career musician getting a gig in a fairly anonymous spot on the bill.

The great thing about Downie is that his casual performing style fits right into a laid-back festival atmosphere, yet it was also pretty apparent that he was a major cut above anyone else present.  Some frontmen just have "it."  His showmanship and charisma was off the charts.  Gord's main move that day seemed to be kind of mock rock star moves, like faux-Elvis hip swivels or pointing and smiling at literally everyone within his eye line.  He was both taking it easy and blowing everyone away; even 80% Downie was stealing the show.  I'm unfamiliar with the Sadies' music (both their old stuff and the album being promoted) yet maybe that's the best sign that a live act is really on fire.  It's one thing to win a crowd when it's diehards who know all your standards, yet quite another to win a crowd that's probably mostly comprised of casuals or non-fans like me.

I've never had the pleasure of seeing the Hip live when Downie is at full power, though of course, that may be in question given that Downie is fighting terminal brain cancer.  I have little doubt that Downie wouldn't be planning concerts with the Hip this summer if he didn't think he could perform at full strength, and this is unquestionably going to be an absolute emotional roller-coaster of a tour.  Like virtually every Canadian of my generation, the Hip have been a major part of my musical life.  Downie is widely cited as possibly the best frontman and lyricist in Canadian music history, though I'd go one step further and rank him against the best from any country.  If you have a chance to see the Hip in concert one more time, take that opportunity to experience the best at his best.
Posted by Question Mark at 3:25 PM